Another Hardy deal for commercial developer

A chance elevator encounter brought developer Paul Hardy out of semiretirement. His plans now are ambitious — and potentially lucrative.

Paul Hardy has a knack for timing.

The residential-turned-commercial developer has made a successful career of knowing when to enter and exit a business sector, a development or a piece of raw land. He also knows when to come out of retirement to capitalize on a prime opportunity.

“I finally figured out the money is in the land and not in the developing," says Hardy, broker of record and owner of Development Realty. "It’s owning the land.”

For example, just prior to the latest recession, in 2007, Hardy sold 1,500 acres to a national homebuilder. Then, along with an equity partner, he acquired distressed commercial properties in Cape Coral and two large residential tracts in northern Lee County. Those residential tracts were acquired two years ago and are now under development by national homebuilder D.R. Horton. Hardy spent $6.5 million on the land, plus $3 million in infrastructure costs. He sold it to D.R. Horton for $20 million — making about $11 million in five years.

“We offered cash, quick close and everyone thought I lost my mind,” says Hardy about the initial residential property purchases. “It was a good deal, if you can sit and wait. I got a couple of calls from people who do what I do and they said, ‘You did a good deal. You’re going to make some money there.”

The deal was so good it sent Hardy into semi-retirement in 2016. That lasted until his newest venture, Alico ITEC Park— a 240-acre, 1.2-million-square-foot commercial and industrial project adjacent to the southern boundary of Southwest Florida International Airport — literally fell into his lap. The massive project has the ability to reshape a prime piece of property in Fort Myers, possibly attracting several tech companies — maybe even a corporate headquarters. It also has the potential to be another major score for Hardy, 63, who has been in development for some 30 years.

Technically, it was Hardy’s attorney who was in the right place at the right time. A chance elevator ride brought the availability of the Alico ITEC Park property to his attention.

After three decades as a principal in the development of more 4,000 residential units in Lee and Collier counties, plus other deals in commercial real estate, Paul Hardy has found two certainties: patience and flexibility are keys to success in the business.

“I told my partner we have to be patient,” says Hardy. “I said someday someone is going to build a new building nearby and they will have to charge more in rent. We were charging $6 per square foot. Now we’re at $14 per square foot, and we’re the best deal in town.

Through their Coral Commercial Properties, Hardy and his partner own and manage three commercial centers: Entrada Plaza and Central Cape Business Park in Cape Coral and Toll Gate in Naples. He keeps tenants in place by taking modest increases in rent and demonstrating the value of staying in place. Flexibility is integral.

“If they need to defer their rent a month because there is an issue, you have to do it,” says Hardy. “We can do that because we’re small whereas most shopping centers and commercial buildings are owned by major companies, and management has no latitude. They will cut off their nose to spite their face. I can keep a tenant in place and paying whereas other places will lose them because they have no latitude to make judgment calls.”

That flexibility proved valuable during the recession, Hardy says, when businesses disappeared overnight. Working with tenants to help keep the lights on rather than try to chase them down for rent they can’t pay helped both parties weather the economic downturn. And if they do leave, he says it’s prudent to let them go.

“These tenants in the small centers we have will scatter if the economy goes south,” says Hardy. “They will pack up overnight and leave. There’s no reason to chase them. Just let them go, suck it up and rent the place. It’s not worth the stress or the financial costs with the attorneys, and it’s bad karma.”

It was a site Hardy had previously owned. And having earlier secured its entitlements, no due diligence was required. He bought the property in 2006 for about $9 million, then sold it for $21.3 million in 2008 to former CBS Television President and CEO John Backe. The trust for the Backe estate was eager to liquidate the property, and Hardy was in the right place at the right time once again. He and his partner repurchased the site in 2017 for $6.5 million.

“In December 2017,” says Hardy, “my attorney was in an elevator with another attorney who asked him, ‘Do you know anybody who can buy some property and close on it quickly?' My attorney said he did, and the guy told him which property it was. My attorney said, 'Well my guy actually owned that property and sold it to your client.'”

Backe had ties with Florida Gulf Coast University. He had ambitions for the school to develop a research and technology campus on the Alico site, beginning with the school’s Emergent Technologies Institute, a 25,000-square-foot facility that houses some FGCU classroom and office space. Plans did not further develop, and Backe’s death in 2015 eventually put the property back in action.

“I made them an offer that was borderline insulting, and they took it,” says Hardy. “It was so easy for us to repurchase it because we didn’t have to go through the machinations that due diligence requires. The price was much less than I bought it for the first time, so that was not a difficult decision. The brainwork was trying to figure out how to position it, how to move forward, the timing with the roadwork and other construction going on around it.”

Hardy is convinced the timing is right, now, for development of the park. He is positioning the project to attract clean, high-tech commercial and industrial development. The acronym ITEC stands for “Innovation, Technology, Enterprise, Commerce,” which reflects the types of businesses he seeks.

“We import capital. We want to export technology,” says Chris Spiro, owner of marketing firm Spiro & Associates in Fort Myers, who works with Hardy as a consultant. “That’s why Paul wants to keep it clean and that’s why you won’t see landscaping yards or anything of that nature.”

Beyond timing, the location, say officials, is also prime. Across Alico Road from the entrance to the park are underway residential developments WildBlue and Esplanade Lake Club. In addition to the airport, within a three-mile radius of the park is Gulf Coast Town Center, Miramar Lakes, access to Interstate 75 and FGCU. Widening Alico Road with a realigned intersection with Airport Haul Road, which provides direct access to RSW, began in late 2018.

“We want this to be the go-to place for high-tech business, and with the two adjacent residential developments going in now we have places for executives and upper management to live, which is a big deal,” says Hardy. “If you are bringing in 20 to 30 high-paid executives, they need to live somewhere. You don’t want to put them out on the interstate every day. I’ve never had a project that had this much positive synergy.”

Alico ITEC Park is part of the 3 million square feet of entitled industrial space in the northeast quadrant of the Alico Road-Ben Hill Griffin Parkway corridor. Lot sizes within Alico ITEC range from 1/2 acre, starting at the mid-$100,000s, to 40 acres, which will run into the millions.

Of its 1.2 million square feet, 240,000 square feet are designated as commercial. In addition, 50,000 square feet, which can be retail, has frontage on Alico Road. Features include providing architectural control and property owner investment protection; security cameras throughout common areas; eco-conscious features such as a solar bank for sustainability and savings; and network speeds in excess of 1 gigabit. Alico ITEC Park also has restrictive covenants and will be heavily landscaped — Hardy already has personally planted dozens of trees on the site.

'I made them an offer that was borderline insulting, and they took it.' Paul Hardy, Alico ITEC Park

“The beauty of this piece of dirt is that it is so much front and center of everything,” says Spiro. “It is fresh on the radar. There is a lot of interest. This is where Collier County commerce and Lee County commerce meet.”

With little commercial land available south of Lee County, Hardy expects Alico ITEC Park to draw business-owning tenants from Collier County to take advantage of a reverse commute. And Spiro believes Alico ITEC Park, with its flexibility to combine large or small parcels to suit a business owner’s needs, is uniquely positioned to draw companies from Southwest Florida and beyond.

“When a site selector or economic development officer is looking for raw dirt and the ability to do a project, they are looking for that kind of flexibility,” says Spiro. “So if they’ve got a site selector here looking for 100,000 square feet of office space and 60,000 square feet of warehouse space, they can do that here with access to the airport, the proximity to the interstate and the university, shopping, restaurants and entertainment. This is the perfect storm for economic development.” 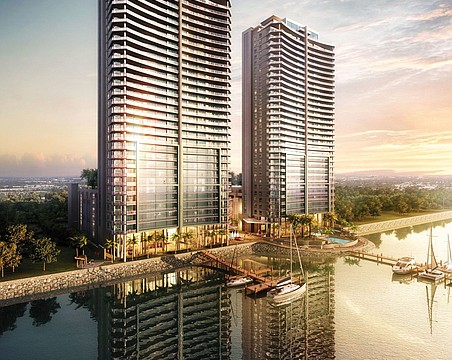 Jaxi Builders puts One, Allure sites in Fort Myers on the market

Large industrial site comes to market for more than $12M