Raphael Bostic — at the helm of the Atlanta Fed — shares his thoughts on interest rates, Florida business and what’s ahead in 2019.

President Donald Trump might be quick on the Twitter trigger, but a least one federal official takes a more measured approach.

“For every policy, every tweet that comes out, we’re not running a new model,” Federal Reserve Bank of Atlanta President and CEO Raphael Bostic says. Bostic was a keynote speaker at a Financial Literacy Day event held April 5 at the University of South Florida Sarasota-Manatee.

The tweets, he says, come out too fast to keep up with them, and Bostic wants to protect his team’s limited resources. Instead they wait for policies to be signed before running economic models.

Bostic, assistant secretary for policy development and research at the U.S. Department of Housing and Urban Development from 2009 to 2012, was appointed to his position at the Fed in June. The Atlanta Fed covers the Sixth Federal Reserve District — Florida, Alabama and Georgia as well as portions of Louisiana, Mississippi and Tennessee. Bostic is the first African American to serve as a Federal Reserve Bank president. “I approach the job every day as if it isn’t a big deal," he says, "but it is a big deal.”

During a question-and-answer session before attendees at the event as well as during a small gathering with media afterward, Bostic shared his thoughts on a variety of issues related to the Fed, the economy and Florida business. Edited excerpts:

• Housing market: “I’m always worried,” Bostic says. “I get paid to worry.” The worry stems particularly because of the events of the last decade, he says. Part of the problem during the last economic crisis? Borrowers weren’t as financially literate as they could have been, he says.

• Affordable housing: “I’m struck with how consistently I’m hearing concerns about affordability,” Bostic says. Even some smaller towns across the country are facing housing cost challenges, he says. People in several places he’s visited have expressed these concerns, including Knoxville, Tenn., Nashville, Atlanta, Birmingham, Ala., New Orleans, Jacksonville and Sarasota. Says Bostic: “It is widespread in a way I didn’t expect.”

“For every policy, every tweet that comes out, we’re not running a new model.”— Raphael Bostic, president and CEO, Federal Reserve Bank of Atlanta

• The Fed's role in economic bubbles: "There’s risk in any policy,” Bostic says. “There’s going to be uncertainty in policy.” His team regularly talks to business and community leaders, he says, asking them about their challenges and what they are seeing in the economy. “That’s valuable intelligence for us.”

• Importance of interest rates: Bostic says businessmen and women should be looking at the Fed’s forward guidance. “Businesses need to be mindful of the environment,” he says. He suggests looking at the trajectory interest rates are likely to take and seeking additional information from a variety of sources.

• What’s ahead in 2019 for Florida businesses: Bostic says his team is trying to ascertain how businesses are changing plans in the wake of the tax overhaul and other economic changes. A survey, Bostic says, revealed most business owners aren’t planning to increase capital expenditures. Some small businesses are still determining the impact. He says there’s a lot yet to be written about the business response.

• Heard on the street in Florida: “People are very excited about tax changes,” Bostic says, adding people are expressing that the new tax plan give them the opportunity to invest in their businesses. His team is also hearing that employers are experiencing challenges with hiring enough workers that have the skills they’re looking for. Business leaders in Florida also tell his team they’re concerned with trade policies and other policies originating in Washington, D.C. Policy surprises and rapid changes are creating uncertainty, he says, making people nervous.

Tell the Fed what you think

THURSDAY'S CUP: Too big to fail is a disaster in waiting 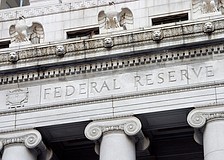