Once Art Nadel is apprehended and answers questions about the

money, investors will focus next on the other partners: What did they know?

Peg Nadel, a retired cover-girl model, beamed the night of Jan. 10. She was the chairman of Circus Sarasota's annual gala under the Big Top, and she had just placed the top bid in an auction - more than $2,000 - for the privilege to fly with Sarasota's beloved aerialist, Dolly Jacobs, for the second consecutive year.

Also beaming at Nadel and her prize were her husband, Art, and his son, Chris. They watched with joy as Peg Nadel floated through the air with grace and ease.

What did they know then?

The following Monday, Jan. 12, former Longboat Key residents Neil and Sharon Moody sat at the front of the ballroom at Sarasota Ballet's annual En Pointe luncheon. Moody carried his usual demeanor - reserved, modest, friendly, ready with a bright smile. Sharon was herself that day, too - outgoing, happy, remarking as she often did how blessed she was.

The Moodys were big benefactors of the ballet. They contributed $100,000 last year to create an endowment fund for the ballet. By the end of the luncheon, the Moodys filled out a pledge card to extend an annual five-figure contribution for another five years.

What did they know then?

Mrs. Nadel, Neil Moody and Moody's son, Chris, have played secondary roles to the drama surrounding the disappearance last week of Art Nadel. Nadel vanished Jan. 14 after leaving a note at his east Sarasota County home that led to the discovery that investors' $350 million in Moody and Nadel's hedge funds may be gone.

Nadel's out-of-state apprehension appears imminent. And this has up to 500 investors in Scoop Management Inc. and Valhalla Investment Partners L.P. anxiously awaiting answers to a few searing questions:

Is any of their $350 million left, and if so, where is it? Or did Nadel steal and hide much of it or lose it all in risky investments?

To be sure, those are the $350 million questions. But once law authorities and lawyers determine the answers, not long after their attention likely will turn to Mrs. Nadel and the Moodys: What did they know, and when did they know it? More specifically, are they victims, or are they culpable?

On advice of their Fort Lauderdale attorney, James Miller, a partner in the national law firm of Boies, Shiller & Flexner L.P. (the David Boies who defended Al Gore in 2000), the Moodys did not answer at press time two pages of questions e-mailed Sunday to Chris Moody. They have told investors they had no knowledge of what happened to the money in their family of five hedge funds.

The Moodys' claim of innocence has left Valhalla investors conflicted. Interviewed investors say they want to believe the Moodys and Mrs. Nadel, but they also say: How could they not know?

When investors walked into the downtown Sarasota office of Scoop Management Inc. and Valhalla Investment Partners L.P., they say the Moodys' offices were on the right side of the building and the Nadels' offices were on the left side - about 15 feet apart. One investor says Nadel and the Moodys could talk to each other across the room without having to shout.

Having formed their business in 1999, the Moodys and Nadels often socialized together, attending the same philanthropic events. There was a collegial connection, too. Peg Nadel's son, Geoff Quisenberry, Andy Martin and Michelle Bell, all of whom worked for Scoop Management, graduated together from Cardinal Mooney with Chris Moody's wife, Tamara.

The businesses were set up with separate ownerships. The Nadels owned Scoop Management, and the Moodys owned Valhalla Investment Partners L.P.

Valhalla contracted with Scoop for its investment services. Valhalla's private-placement memorandum describes Scoop's role as that of "providing trading signals, market data, computer investment and trading programs, technical and fundamental research and entry of trades. In other words, Nadel handled all of the trading and day-to-day investing. He, more than anyone, knew the value of their funds' total assets.

Scoop also provided "office management and technical services in connection with portfolio operations," including the use of office space and "bookkeeping."

The latter, "bookkeeping," will become another center of attention. In its disclosure to investors, Valhalla notes that its accountant, Michael Zucker, husband of Sarasota County School Board Member Caroline Zucker, is neither a certified nor public accountant. Nowhere in the memorandum is there a reference to Valhalla's operations being audited.

While Nadel handled all of the trading - and presumably the entire $350 million in assets - the private-placement memorandum states that "all investment decisions ultimately are made by the General Partner," Neil and Chris Moody.

But as investors tell it, the Moodys apparently deferred to Nadel's judgment and skills for most of the investing. One investor says when Neil Moody explained Valhalla and Scoop's business, Neil Moody modestly described himself "as a good-looking salesman with blond hair. I'm not a rocket scientist." Put another way: Neil Moody was the rainmaker for the funds. He brought in investors - many of them friends and acquaintances from Sarasota and Longboat Key's philanthropic and high-level social circles.

A graduate of Lehigh University in 1960, Neil Moody spent 32 years with Kidder Peabody and PaineWebber in the Northeast. The private-placement memorandum describes his position with those firms as "vice president, shareholder." He is licensed with the Commodity Futures Trading Commission.

Chris Moody has a similar background. He also graduated from Lehigh University with a degree in finance. After a short time with American Express Financial Advisors, Chris Moody joined UBS PaineWebber. The memorandum says Chris managed $100 million for six years until joining his father in 2003. He is licensed with National Commodity Futures, as a general registered representative, uniform securities agent and uniform investment adviser.

The memorandum describes Nadel as a New York University law school graduate. He developed real estate and invested in securities in the 1960s. In the 1970s he continued those activities and also served as chief executive officer of a public company that developed and owned health-care facilities.

In the 1980s and 1990s, the memorandum says, Nadel was a consultant for public and private companies, specializing in business plans, budgets and financing. "In 1997, Mr. Nadel together with Ms. Peg Nadel and others formed a company with the purpose of studying and using computer-generated investment and trading programs and utilizing the results for portfolio management," the memorandum says. "The resulting proprietary system has been used since 1999 by other hedge funds."

The memorandum, prepared by Florida's pre-eminent law firm of Holland & Knight, makes no mention of Nadel being disbarred from the New York Bar in 1982 (according to Bloomberg News).

Nadel apparently thrived on trading. The memorandum says he has engaged in securities trading nearly all of his professional life. Understanding how he did it, however, created a cloak of mystery.

Ask Valhalla investors to explain what Nadel did, and they'll cite such things as the Triple-Q system of trading the Nasdaq 100. Some call him a "day trader," buying and selling huge positions each day and converting the securities to cash by day's end. Even Neil and Chris Moody found it challenging to explain Nadel's complicated trading practices so intelligent professionals could understand what they were describing.

A Sarasota Ballet board member, who requested anonymity, says that after visiting Chris Moody last year, he thought: "I like this guy. I would have considered putting my own money in it. I felt that good about him. But I never had a real understanding of how it worked."

Says another investor: "I understand what a hedge is. But not this."

A Sarasota accountant called Nadel a genius whose investment systems worked until the market turned. He says he could believe the Moodys were bamboozled and unaware. But as another investor says: "How could they not know?"

The Securities and Exchange Commission charged Arthur Nadel Jan. 21 with fraud in connection with six hedge funds he operated.

Nadel is accused of overstating the value of the funds by about $300 million. The SEC said the funds only appear to have assets of $506,000. Nadel allegedly transferred $1.25 million recently from two of the funds into secret bank accounts. His assets have now been frozen.

The general partners of Sarasota-based Valhalla Investment Partners L.P. earned what they termed a "performance-based special allocation" each year of 25% of net profits in their funds plus 2% of the net asset value of the total assets.

Based on that, if you assume that $350 million was the net-asset value of Valhalla's funds at the end of 2008 and that it had gained 9% in value during the year, its general partners roughly would have earned:

• $7 million as a management fee

In the prior year, 2007, assuming the hedge funds' generated a 19.5% return and increased their value from $253 million to $315 million, the partners roughly would have earned:

Investors were warned: You could lose it all

Look at the accompanying chart. The annual returns speak for themselves. No wonder investors wanted in.

But if you read the private-placement memorandum of Sarasota-based Valhalla Investment Partners L.P., the limited partnership that controlled four hedge funds, you could not reach any other conclusion than this: If you were willing to invest the $100,000 minimum to get in, you must be prepared and able to lose everything.

The investors were warned.

Private-placement and public-company stock offerings typically are rife with cautionary boilerplate language for investors, alerting them to risks. Valhalla's private-placement memorandum was no different. Consider these statements in the memorandum:

• Executive summary: "Investors ... must understand the speculative nature of an investment in the fund and be able to afford a loss of a substantial portion of such investments."

• Risks: "An investment in the partnership is speculative and is suitable only for investors who are willing to accept substantial risks of loss, including the risk of loss of an investor's entire investment."

• Eligible Investors: "An investment should not be made by any person who (i) cannot afford a total loss of principal ..."

• Risk Factors: "There is a high degree of risk associated with the purchase of an interest of the partnership. ... No one should consider subscribing for more than he/it can comfortably afford to lose and it is recommended that no one should invest more than 10% of such person's readily marketable assets in the partnership." That was stated in italics.

If that wouldn't be enough to cause you to hedge on whether to invest in Valhalla, other sections of the private-placement memorandum also could be convincing, in particular the investment strategy Valhalla's investment adviser, Scoop Management (Arthur Nadel) employed.

Consider, alone, the second sentence in the memorandum's section on investment strategy:

"The partnership may invest and trade, on margin and otherwise, directly or indirectly, long and short, in public and private securities, whether U.S. or non-U.S. issued, including without limitation, equities, exchange traded funds (ETFs), other funds, new issues (i.e. IPOs), options, physical commodities, commodity futures, financial futures, fisxed-income securities, convertible securities, warrants, restricted securities, convertible debentures, foreign currencies, forward contracts on currencies and commodities and other instruments and investments, in each case of every kind and character, and may lend funds or assets and borrow money, with and without collateral."

Another cautionary sign: "The partnership may utilize various investment techniques, including day trading, margining its positions, using derivative securities, short selling and other leveraging techniques and, in certain situations, purchasing or selling put or call options in connections with positions in the related securities."

Entire companies are built on investment managers who specialize in all of the above types of trading. At Valhalla, the general partners relied primarily on the expertise of one man, Arthur Nadel, to manage five funds and $350 million of other people's money.

The rewards, for a while, were commensurate with the risk. But last week's disappearance of Nadel calls to mind the oft-repeated adage: If it sounds too good to be true ...

The following table shows the annual net returns to investors after management fees. 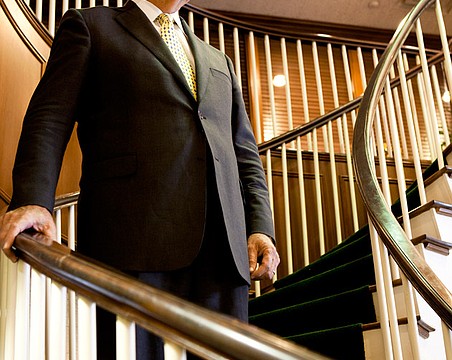 The Case Against Hedge Funds