Local artist shines light on business in the industry

Free-spirited artist Chad Mize doesn't have a background in business. But after a 20-year freelance career, he's learned a few things.

Core challenge: Mize has sometimes struggled on financial side of business — more specifically, paying the bills.

What's next: Mize created a mural that’s now at Disney Springs that will stay up through next year. His gallery, Mize Gallery, is also hosting two more planned events this year.

As it turns out, the mind behind those quirky, well-known “World Tour” T-shirt also has a knack for business.

Or at least business in the art industry.

Chad Mize, the artist and painter of several large scale outdoor murals in St. Petersburg's central and downtown business districts — and creator of those top-selling shirts — has owned two galleries in his career. He's also made it for two decades as a freelance artist. While the trend of freelancing in a host of industries has grown significantly in recent years, doing it in the art world — the phrase starving artist comes to mind —is no easy feat. Mize, who has done everything from design, animation and painting to illustration, art direction and character development, has come to embrace the solo life.

“It’s nice to get to that point of not worrying,” he says. “I get to be more creative and take more risks now.”

But it wasn't always that way. There have been days where he didn’t know if he’d be able to pay the bills. “It hasn’t been easy financially.”

Mize admits he’s self-taught in the business world — something he was long interested in learning more about. He’s found that “it’s something you learn as you live it.”

When he opened Mize Gallery in 2018, which remains his current entity, he had a bit more money in his pocket than he did when opening the BLUELUCY gallery in 2009. This time around, “it was more about the community,” he says, leaning on one business lesson learned.

Other core business lessons Mize has lived and learned? Always be organized. And always be persistent.

Even though his first gallery shut down in 2015, Mize still represented over 450 local and national artists. That’s about the time he dropped website work and having clients, instead shifting to creating murals and his own design brand, Chizzy. That brand is where he houses his various design creations, including the aforementioned “World Tour” design. That T-shirt features the names of four cities: Paris, London, Tokyo, St. Pete. The design and concept was a hit, and people still wear that shirt, which debuted in 2015, around town, at farmers markets and other locales.

Other Chizzy designs range from local sports teams to showing support for a pro-choice stance. On sports, one current ware is a T-shirt that says, in order, Ray, Buc, Rowdy, Bolt — the four area pro sports teams, each in one of the teams' core colors.

Mize attributes some of his business instincts to an experience he had early on in his career. After graduating from the University of Mississippi in 1996 with a bachelor's degree in fine arts, a Boston-based online textbook startup took a chance on Mize in 1998.

While he’d never had any formal computer training, that job, though short-lived, trained Mize on computer programs. After he was laid off in 2001, Mize decided to work for himself and has done so ever since.

On being organized, Mize learned that's imperative when managing several artists. His gallery hosts a group exhibit every month, for example, which he plans six months in advance.

“I post something every day to remind people I’m still around,” he says of his social media presence.

Most recently, both prominent companies Disney and Coach reached out to him for some work. He created a mural at Disney Springs in March that will be up for a year.

“They wanted artists to speak for themselves,” he says. As a member of the LGBTQIA+ community, Mize says he was given the creative flexibility to express himself in that way with the mural, which is featured by the Kate Spade location at Disney Springs.

Aside from managing artists, Mize is an artist first and foremost. Inspired by music, nature, politics, humor and colors, his main goal is to inspire and uplift the viewer.

Noting that he’s inspired by all kinds of music, Mize says he used to have a CD addiction. But not an addiction for the music featured on the CDs. Instead, he would pick his collection based on the cover album, not knowing if the songs were any good.

Other inspiration comes from the community. “I’m a homebody,” he says. “I like to enjoy where I live.”

That motivation leads him to create art based on the kind of change he’d like to see in his community. “I’ve been here almost 20 years,” he says. “You can’t stop change. I’m proud of being part of that.”

“I want to be a light in the community,” he adds, “by making it a better place.” 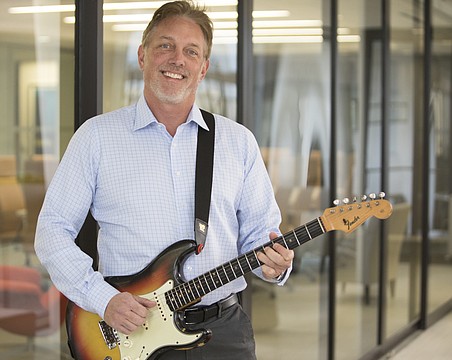 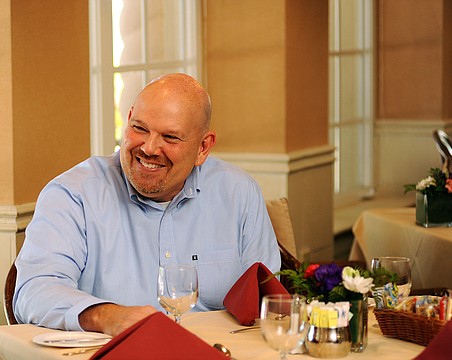 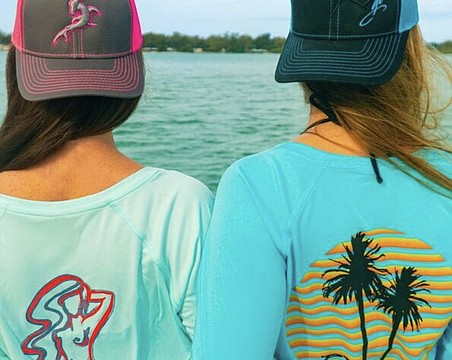 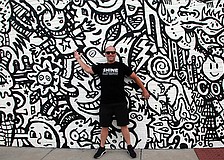 Lord of the Shirts 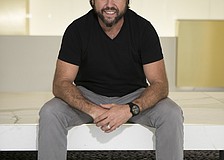 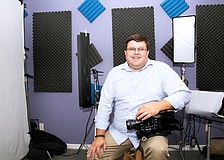 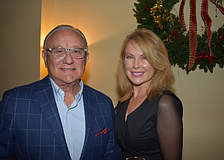