Today’s inflation shows the ignorance and stupidity of politicians. History is rife with its tragic consequences.

For the past few months, we have abandoned what typically was our priority in this space — to comment on local, regional and Florida affairs.

We have done so in large measure because not since the malaise spawned by President Jimmy Carter in the late 1970s have we seen national affairs so off course and heading in the wrong direction.

At the same time, it often appears much of the news media have failed to report and/or expose the dire consequences that are about to befall us as a result of decisions the politicians are making in Washington, D.C.

Indeed, when you think about all that is going wrong with the U.S. economy now — and certainly Florida and Floridians are feeling the effects — all of these maladies are government inflicted. They are a result of politicians who apparently have scant or no knowledge of history or, worse, who ignore the realities of history.

Just consider a few of these maladies that are most top of mind among Americans today:

• Supply-chain bottlenecks (e.g., not enough truck drivers to deliver everything).

The fallacy of ignoring consequences

The following is excerpted from “Economics in One Lesson,” by Henry Hazlitt, published in 1946:

“There is a second main factor that spawns new economic fallacies every day. This is the persistent tendency of men to see only the immediate effects of a given policy, or its effects only on a special group, and to neglect to inquire what the long-run effects of that policy will be not only on that special group but on all groups.

“It is the fallacy of overlooking secondary consequences.

“In this lies almost the whole difference between good economics and bad.

“The bad economist sees only what immediately strikes the eye; the good economist also looks beyond.

“The distinction may seem obvious. The precaution of looking for all the consequences of a given policy to everyone may seem elementary.

“… Yet when we enter the field of public economics, these elementary truths are ignored.

“From this aspect, therefore, the whole of economics can be reduced to a single lesson, and that lesson can be reduced to a single sentence. The art of economics consists in looking not merely at the immediate but at the longer effects of any act or policy; It consists in tracing the consequences of that policy not merely for one group but for all groups.

“Nine-tenths of the economic fallacies that are working such dreadful harm in the world today are the result of ignoring this lesson.”

We’ll stop there. We see and feel those ailments every day. But the list actually is much longer (student loans in default, cost of college tuition, rising housing prices, lack of anti-COVID medicines other than government-funded vaccines, and on and on).

Let’s not ignore, either, the criminally high national debt and annual federal deficits.

We’ll say it again: Our federal government — President Joe Biden, former President Donald Trump, Congresses past and present in 2020 and 2021, and the Washington bureaucrats — is the cause of all of our economic ills.

It is as simple as this: Whenever government intervenes in the marketplace, it tilts the table off balance.

And at this moment, from March 2020 through today, Washington politicians have caused all of our economic ills by doing what governments have always done: resorted to inflation — the printing of too much money — to make the citizenry feel good now.

Last week we reminded you how that was one of the causes of the fall of the Roman Empire around 400 A.D. Even before that, the Greeks’ supreme leader, Solon, tried inflating the money supply as early as 594 B.C. And you can make a list longer than the one above of governments that have resorted to inflation as a quick fix to the economic disasters they have created:

But the people running our government and the world’s governments never learn. And the reason they don’t learn is they are always concerned more about themselves, their popularity and the here and now than they are concerned about the long-term consequences of what they do.

The late Henry Hazlitt (1894-1993), one of this nation’s greatest economic journalists, chief editorial writer for The New York Times when it was a respectable newspaper and a founding board member of the Foundation of Economic Education, captured this ignorance of consequences in his seminal book “Economics in One Lesson.”

Hazlitt described it as “the fallacy of overlooking secondary consequences."

“The bad economist sees only what immediately strikes the eye; the good economist also looks beyond,” Hazlitt wrote in 1946.

While Hazlitt lit into bad economists, you can easily replace the word “economist” with “politician.”

When the pandemic spread in early 2020, and the Washington politicians and health officials panicked, they led the charge to shut down the nation’s economy.

Florida is increasingly becoming a focal point in the Battle for Ivermectin, a drug that has proven effective for treating COVID and yet continues to be spurned by the nation’s medical establishment and media.

On Nov. 6, Dr. John Littell, M.D., a family physician in Ocala and one of the state’s leading prescribers of ivermectin, will host The Florida Summit on COVID from 10 a.m. to 3 p.m. at the World Equestrian Center in Ocala.

Summit participants are expected to exchange ideas about the science, prevention and treatment of COVID, including discussions about ivermectin.

What did they do to solve the problem? Predictably, they printed billions of billions of new dollars and handed out the money to people and businesses. They flooded the market with dollars at the same time productivity was contracting.

For all of 2021, we have had more dollars trying to buy fewer goods. Demand for goods is far outstripping supply. Voila! Prices for everything are rising.

There is no end in sight to this, either. Biden, in fact, is making the economic situation worse with every step he takes. Firing workers who are not vaccinated? That will compound the shortages. Brilliant.

With inflation running at 5.4% and headed higher, economists polled by The Wall Street Journal are forecasting years of rising prices and interest rates and years before supplies of goods and labor come into balance.

You know it’s going to get worse. We’ve been there. We saw it under Jimmy Carter, a misery index that popped off the charts. Brace yourselves.

Compounding the misery are the Democrats in Congress trying to force into law $2 trillion more in new federal entitlement spending. And they have the audacity to say it’s not going to cost us anything. Taxes will pay for it all.

All of this reminds us of the famous warning from Plato: “If you do not take an interest in the affairs of your government, then you are doomed to live under the rule of fools.”

The inevitable recession is forthcoming

Hayek, not Keynes, got it right 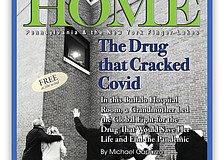 The battle for ivermectin

Trump's tariffs not fit for print

Matt Walsh: Save Our Homes should be repealed

Economics professors: Fed’s fingerprints are all over inflation debacle