There's an epic battle in Tallahassee over how to spend the gusher of money earmarked for conservation-land programs after voters approved a state constitutional amendment to fund it last year.

Now, a similar debate is playing out at the local level.

Like many counties, Lee County created a land-conservation program that hauls in millions of dollars in property taxes from residents to preserve land from development. Currently, Lee County's Conservation 20/20 program is sitting on $100 million.

It's a surprising amount of cash considering the area suffered through one of the worst recessions in generations. To date, Lee County has spent $303 million to acquire nearly 25,000 acres since the program started in 1996. That's 39 square miles of land scattershot all over the county.

But some environmentalists aren't satisfied with the previous goal. At a recent panel discussion hosted by the Chamber of Southwest Florida in Fort Myers, ecology professor William Hammond says the county should set aside 40% or more of the county for conservation.

But Conservation 20/20 should have ended in 2007. In a non-binding vote in 1996, voters only approved the program for seven years. Instead, Lee County commissioners extended it by ordinance.

“It's the nature of government to get bigger,” says Charlie Green, who audited the land-buying program in 2011 when he was the Lee County Clerk of Court. “You cannot give the government enough money.”

Green's audits of the land-buying program in 2011 showed that the county overpaid for conservation land, particularly during the recession. Most observers speculate the program could have failed in a referendum last year as a result of those audits.

The political will to put the issue to voters appears to be forming now. “It needs to go out to referendum in 2016,” says Lee County Commissioner Larry Kiker, a sentiment echoed by Lee County Commission Chairman Brian Hamman. “It's a good time to review the whole program.”

Bound together
In 1996, Lee County voters approved taxing themselves 50 cents for every $1,000 of property value to be used for purchasing and managing conservation lands for water supply, flood protection, open space, wildlife habitat and recreation.

There's never been an outcry to end the program, points out Charles Basinait, the chair of the land use and environmental law practice group of Fort Myers law firm Henderson Franklin who has represented clients selling land to the county. “That signals to me that the general public likes the program,” he says.

What's more, Basinait says the program depends on willing sellers and is subject to market-based values. “There's no condemnation by the county to grab this property,” he says. “Often times it doesn't work out.”

Indeed, setting aside land for conservation in perpetuity in this way is extremely popular with voters. A blue-ribbon panel established after the Lee County Clerk identified overspending on conservation land suggested changes to improve the program rather than dismantling it.

In 2011, the audit by the Lee County Clerk of Courts found that the 20/20 program had paid significantly more per acre during the economic downturn than in prior years. Prior to 2006, the program paid $7,247 per acre for conservation land. From 2006 to 2011, the program paid $16,978 per acre, leading some to conclude it had become a slush fund for politicians to bail out landowners hit hard by the recession.

Even Green says he has no problem with the program — as long as voters approve. “If you want all these things, step up to the ballot box and stuff your money in it,” he says.

Water everywhere
With greater scrutiny and an ongoing debate about its goals and strategy, Conservation 20/20 has been slow to buy additional land in recent years. Meanwhile, the program's coffers have swelled to $100 million.

At the state level, water-related projects are likely to be the big beneficiaries of spending for conservation. The same is true for Conservation 20/20.

Speaking as a panelist at the recent chamber event, Fort Myers engineer Carl Barraco Sr. says state and federal requirements to lower nutrient levels from waterways means the county likely will have to spend money on water-related projects, and Conservation 20/20 funds could be used for that purpose.

“It's time we refocus, considering the changes that have occurred,” Barraco says, suggesting that the group work more closely with utilities and the state agencies responsible for water issues.

One idea floated by Lee County Property Appraiser Ken Wilkinson is for the state to give every county a share of the Amendment 1 funds based on the county's number of parcels. Then, there would be no need for each county to create and manage a land-buying program like Conservation 20/20. “It's the easiest idea in the world,” Wilkinson says. “There's no middle man.”

Because the program depends on willing sellers, Conservation 20/20's land purchases have occurred in a scattershot way all around Lee County. Some suggest the group focus on buying land adjacent to conservation areas. “It may be time to say let's be strategic,” says Barraco, who is a member of the 15-person committee that oversees Conservation 20/20 and founder of Barraco and Associates, a civil engineering firm in Fort Myers.

Lee County commissioners will be holding workshops throughout the year to discuss the program's future, says Kiker. “We have 100 million reasons why it's not as effective as it should be,”
he says.

Whatever the outcome at the ballot box, one thing everyone agrees on is this: Taxpayers likely won't be seeing the $100 million returned to them. 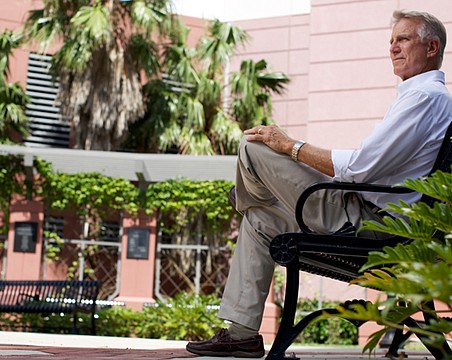