Marketplace of Ideas: The Purpose of Government

Now that the 2012 GOP presidential nominee is almost certain to be either Mitt Romney or Newt Gingrich (who, in terms of policy and lack of principle, are practically indistinguishable), many on the right are turning their attention to the 2012 Senate races. And they are wise to do so.

In the 2010 midterm elections, Republicans gained control of the House but failed to secure a majority in the Senate, leaving Democrats with 53 of 100 seats. Of the 33 Senate seats up for election in 2012, 21 are held by Democrats, two by independents. Republicans are likely to retain control of the House, and if they manage to gain control of the Senate as well, they will have the opportunity to repeal ObamaCare, Dodd-Frank and other disastrous laws and regulations, and to begin cutting federal spending. These are crucial short-term goals.

But if we want to return America to the free republic it is supposed to be, we ... [also] must embrace and advocate the only principle that can unify our political efforts and ground them in moral fact. That principle pertains to the purpose of government.

Government is an institution with a legal monopoly on the use of physical force in a given geographic area. What is the proper purpose of such an institution? Why, morally speaking, do we need it?

The proper purpose of government is, as the Founding Fathers recognized, to protect people's inalienable rights to life, liberty, property and the pursuit of happiness.

Government fulfills this vital function, as Ayn Rand put it, by banning the use of physical force from social relationships and by using force only in retaliation and only against those who initiate its use.

Insofar as an individual respects rights — that is, insofar as he refrains from assault, robbery, rape, fraud, extortion and the like — a proper government leaves him fully free to act on his own judgment and keep and use the product of his effort.

Insofar as an individual violates rights —whether by direct force (e.g., assault) or indirect force (e.g., fraud) — a proper government employs the police and courts as necessary to stop him, to seek restitution for his victims, and/or to punish him. Likewise for international relations: So long as a foreign country refrains from using (or calling for) physical force against our citizens, our government properly leaves that country alone. But if a foreign country (or gang) attacks or calls for others to attack us, our government properly employs our military to eliminate that threat. As Thomas Jefferson summed up, a proper government “shall restrain men from injuring one another, shall leave them otherwise free to regulate their own pursuits of industry and improvement, and shall not take from the mouth of labor the bread it has earned. This is the sum of good government.”

To begin moving America toward good government, we must explicitly embrace this principle, and we must demand that politicians who want our support explicitly embrace it as well. To do so, however, we must understand what the principle means in practice, especially with respect to major political issues of the day, such as “entitlement” programs, corporate bailouts, “stimulus” packages and the Islamist assault on America. Consider these in turn.

Entitlement programs
So-called entitlement programs — Social Security, Medicare, Medicaid and the like — assume that the proper purpose of government is to redistribute wealth. Social Security and Medicare forcibly take money from younger Americans and transfer it to older Americans, funding their retirements and health care. Medicaid forcibly takes money from working Americans and transfers it to the so-called poor, funding their health care.

But the government has no moral or constitutional right to force some people to pay for the retirement or health care of other people. The problem with these programs is not that they are “ill managed” or “need reform.” The problem is that they contradict the proper purpose of government. They don't protect rights; they violate them. They take money from people who have earned it and thus morally own it, and they give that money to people who haven't earned it and thus have no moral right to it.

Thus, these programs morally must be ended.

The simplest and perhaps least unjust way to end these programs is to gradually, over a period of 15 or 20 years, reduce the amount of money (or goods or services) doled out until it reaches zero. Such a phase-out would enable everyone who has been receiving or had planned to receive such “entitlements” to begin making other arrangements, tightening their belts, looking for ways to earn more money or seeking voluntary charity.

Simultaneously, the government could sell assets such as public lands and roads to cover some of the costs of these programs while they are being phased out.

Regarding the popular claim that these entitlement programs are insurance policies into which people have paid and thus from which they have a right to get their money, this is simply false.

As unfortunate as the government's prior malfeasance is, the solution is not to continue the charade but to end it. Entitlement programs violate rights and thus must be terminated. This will cause pain for those whose money has been taken and will not be returned. But any pain that must be endured in the process of shutting down these unjust schemes is more justly suffered by those who have permitted the schemes to remain in existence (my generation included) than by those too young to have ever voted or those yet to be born. This is morally unarguable.

Entitlement programs contradict the proper purpose of government; thus they morally must come to an end. Advocates of liberty must call for their end — openly and righteously — and we must demand that politicians who want our support commit to the goal of ending these programs if elected.

Corporate bailouts
Corporate bailouts — programs in which the government bails out failing banks (e.g., Bank of America), automakers (e.g., Chrysler), insurance companies (e.g., AIG), and the like — assume that the proper function of government is to provide financial support to insolvent corporations.

In fact, government has no moral or constitutional right to take citizens' money — whether via taxation, inflation (stealth taxation) or borrowing (deferred taxation) — to finance or rescue corporations. If a corporation cannot stay afloat on its own, that is not properly the problem of citizens at large; rather, it is the problem of the stockholders, creditors, employees and customers of the corporation.

If the corporation goes bankrupt, stockholders and creditors will lose money, employees will lose jobs and customers will have to turn elsewhere for the goods or services they used to purchase from the now-defunct business.

This is not the end of the world. More than 100 companies go bankrupt every day in America. The people involved pick themselves up, dust themselves off and do something else. (Nor is there any truth to the claim that some corporations are “too big to fail.” Obviously the bigger a corporation is, the more people its failure will affect. But all that means is that more people will have to turn to other opportunities.)

Corporate bailouts plainly violate the proper purpose of government; thus they morally must come to an end. Advocates of liberty must demand that their representatives refuse even to consider supporting such rights-violating schemes in the future.

Every dollar the government spends is first taken from citizens (via taxation, inflation or borrowing), thus violating their rights. What effect does this have on the economy? Follow the money — or the lack thereof.

Had the money not been taken from citizens, it would have been spent, invested or saved by citizens. When a person spends his money — whether on a meal, an education, a car or a vacation — it enhances his life and constitutes revenue for the businesses from which he purchases the goods or services. When a person invests his money, it has the potential to grow in value and create jobs and wealth for others as well. And when a person saves his money in a bank, he thereby makes it available for the bank to loan to others who seek to start businesses, make purchases or invest the money in other ways.

In all such cases, the individual who owns the money uses it as he sees fit and contributes to economic growth in the process. When government takes the individual's money, however, he cannot use it for any such purposes.

When government seizes a person's money, it violates his property rights, which is contrary to the government's proper purpose. And when government uses that money to “spur” the economy, it gives the money to someone who did not earn it, doesn't deserve it and may waste it. This is immoral from every conceivable angle.

So-called stimulus packages clearly contradict the proper purpose of government and therefore morally must be stopped. Advocates of liberty must oppose these schemes wholesale, and we must demand that politicians who want our support likewise reject them and promise never to support them again.

But the government has not retaliated against these regimes, let alone destroyed them. Instead, the government has used the U.S. military to bring “democracy” and “freedom” to Iraq and Afghanistan. Although Iraq and Afghanistan have harbored and continue to harbor enemies of America, neither of these states is or ever was our primary enemy. Iran and Saudi Arabia are.

The proper purpose of the U.S. government is not to bring democracy or freedom to foreigners, but to protect the rights of Americans. In accordance with this purpose, the U.S. military should eliminate the Iranian and Saudi regimes as quickly as possible and with the least risk to the lives of American soldiers. How exactly to do this is a matter of military strategy — but that the government should do this is a matter of moral fact.

We have inalienable rights to life, liberty and the pursuit of happiness, and, as the founders stressed, governments are instituted “to secure these rights.” That is the sole purpose of government, and that is what the U.S. government morally must do — in both domestic and foreign policy.

Conclusion
The foregoing is a brief sketch of how the proper purpose of government applies to a few major issues of the day. But it indicates how the principle applies to political issues across the board. We can extrapolate: The purpose of government is not to provide people with education, but to protect people's rights so that they (and their parents) can think for themselves and pursue education according to their own judgment. Hence government-run schools, the Department of Education and all related programs and departments should be abolished.

Likewise, the purpose of government is not to dictate which foods and drugs we may consume, but to protect our rights so that we can think for ourselves and act on our own judgment with respect to nutrition, health, medicine and the like. Thus the Food and Drug Administration should be abolished.

Similarly, the purpose of government is not to limit wages, but to protect the rights of citizens — including the rights of businessmen and potential employees, and stockholders and potential CEOs, to contract by mutual consent to mutual benefit. Thus minimum wage laws and laws that limit CEO pay should be abolished. And so on.

Marketplace of Ideas: The Purpose of Government

Matt Walsh: We should resolve to restore our liberty 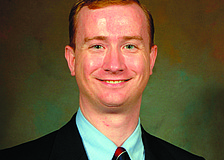 Economic woe based in morals