use not expected to change

"It will continue as a 100% office building," Learner said. "Our plan is to inject some capital over the coming months."

ACP LLC, a Miami-based real estate investment firm, purchased the building Feb. 9 at a low price of $35.5 million from Colonnade Properties LLC of New York, which had bought the building in June 2000 for $49.5 million.

The building has a 35% vacancy rate with leasing rates ranging between $19 and $22 a square foot.

"We have some exciting things planned for the project," he said, declining to spell out the details.

With increasing demand for residential units, Learner is bullish on downtown Tampa, adding that it would translate into more and more companies interested in relocating to downtown and "that will directly benefit 400 North Ashley Plaza."

He also pointed out the building's great location, next to the Tampa Museum expansion. "We just feel that our core capability in turning around under-performing assets will bring to bear on 400 North Ashley," Learner said.

Prior to the North Ashley acquisition, ACP sold two office buildings in Tampa - Westshore Place I and II. "Given the state of capital markets and a high occupancy rate at the project, it was a good time to pursue our exit strategy," Learner said.

"We are long-term believers in the recovery of the specific submarket as evidenced by our investment," Rostowsky said.

The purchase comes with an existing lease and extension options with Circuit City Stores Inc., which has had a store at the location for 14 years, said Fran Gitsham, manager of LW Tampa 857.

"We purchased it strictly as an investment property," Gitsham said. "We purchased it for cash and we went in feeling confident that with the lease obligation with Circuit City we obviously would receive lease monthly payments for a term income stream."

The company has no plans for further investments in this area in the near future, she said, adding, "We purchased it as a 1031 tax exchange property. We sold multifamily units in Southern California and with a portion of the proceeds from there we bought this property."

to be converted into condos

The condo conversion trend continues with another Clearwater Beach hotel soon to be replaced by upscale condominiums.

The motel will be razed and converted into 13 condominiums, priced at $700,000 each, Digiovanni said. Construction should begin within 10 months.

The largest transaction was the sale of 101,198 square feet of general purpose office space at 4003-4175 Fowler Ave. Summit Real Estate Investment Trust sold the premises to Art Hill & Co. for $99 per square foot, according to CB Richard Ellis.

Two other transactions of considerable size were the lease acquisitions of 34,484 square feet of general purpose office space at Bayport Drive and 33,000 square feet of warehouse/distribution at Chad Lane. 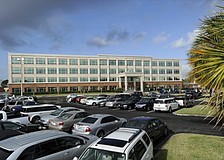