It was an emotional moment for Steve Gardner when he resigned from Bush Ross Gardner Warren & Rudy PA. It's been about 24 years since he co-founded the Tampa firm with John Bush, Jeff Warren, Jere Ross and Jack Rudy.

Steve Gardner brings a wealth of experience to the small practice from his work in areas of development, real estate project financing, condominium and homeowners associations and community development districts.

Admitted to the Florida Bar in 1969, Steve Gardner is an officer of the Tampa Downtown Partnership and is active in the downtown economic development activities through the Greater Tampa Chamber of Commerce. His announcement was a surprise.

"He was very emotional about the decision," says Warren, the firm's president. "It was something very hard for him to do. We wish him well. We want him to be happy."

Besides law, the elder Gardner also dabbles in real estate development. He's a co-owner of the Meridian, a 37-unit loft-style condominium development in Tampa's Channelside District.

Looking at the facial expressions of the panelists, Coffee Talk thought that moderator Thomas W. Cardy had released a skunk into the room.

All the investment banker did was ask a panel of local technology entrepreneurs if they ever use elected officials to help them get government contracts.

The occasion for Cardy's inquiry was a Feb. 8 workshop put on by the Tampa Bay Technology Forum called: "Doing Business with the State and Local Government."

The three-hour session was full of tips for startups looking to master the Byzantine contracting procedures of the public sector and break into the steady, dependable revenue stream that is government IT work.

But Cardy, managing director of Beach Capital Advisors LLC in Tampa, didn't think the workshop should adjourn without somebody attempting to address his ticklish question.

Dominguez and another panelist, Intuit Inc. sales manager Mike Hopt, were not keen on political neophytes in the local tech industry trying to pull strings at city hall.

That sort of thing should be left to the experts - the Fortune 500 company lobbyists crawling all over Capitol Hill.

It's inevitable: the older and smaller beachfront hotels will be gone within the next decade, predicts Joe Burdette, a developer and partner with the Consus Group LLC.

Hotels along Florida's beaches, namely Pinellas County, are being converted to condos at a brisk pace, he says. But existing full-service hotels will mostly stay.

Echoing Burdette was Missy H. Pike, president/CEO of the Tampa Bay Beaches Chamber of Commerce. Burdette and Pike were referring to a study released Tuesday, Feb. 8, that analyzed the economic impact of condo conversion in Pinellas.

"It's a snowball, three quarters down the hill," Burdette says. "The problem with this report is it's a year or two late."

With fewer hotel rooms, it's forecast that tourism development tax revenues would decline by as little as $400,000 or as much as $1.5 million. Conversely, property tax revenue would go up between $9 million and $60 million.

"The county and municipalities will have to decide what they want," Burdette says. "If they want new hotels to be built instead of condos they have to give incentives. Clearwater has done that by increasing the density pool."

Perhaps the answer lies in a compromise to keep tourism as Florida's leading industry. "I think condo-hotels hybrid keeps the tourist," Burdette says.

It fell to former Tampa City Councilman Charlie Miranda to try to sum up the life of Fred C. Barksdale for the Bay area's daily newspapers.

Barksdale, 83, died Feb. 5 of an apparent heart attack at his home in Tampa's Sunset Park neighborhood.

Miranda is quite the raconteur and knows the history of West Tampa politics as well as anybody still breathing. For the obituary writers, however, even Miranda couldn't do justice to such a crafty rogue as Barksdale.

Barksdale, a Tampa native, was a graduate of Stetson University's College of Law who practiced his profession like few colleagues in Hillsborough County. His specialties were divorces and motor vehicle infractions. The latter led to his professional undoing.

Despite a few disciplinary squabbles with the Florida Bar, Barksdale didn't encounter serious legal trouble until a 1977 Tampa Tribune expose of alleged ticket fixing in the city's old traffic court. That brought in the feds, who succeeded in sending Barksdale to prison in 1982 for tax evasion and obstruction of justice. Future Hillsborough Public Defender Julianne M. Holt testified at Barksdale's trial, under a grant of immunity, about her simultaneous employment in the 1970s as a Barksdale gofer and a traffic court clerk.

But Barksdale's true calling was politics, not the law.

He was a throwback to Tampa's ward-heeler days. Barksdale excelled at getting bodies to the polls on Election Day and enjoyed the favor of the powerful for all the rest of the year.

Some suspect Barksdale traded on that goodwill after he reported finding his mistress shot to death in 1973 at a children's clothing store that he had set up for her.

Barksdale acknowledged that police considered him a suspect at first. But city detectives lost interest in him and pinned the murder on a drifter who narrowly escaped the electric chair.

The conviction was later overturned by an appeals court that found the Hillsborough state attorney's office knowingly used false testimony to win it. 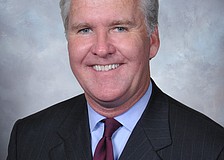