Salvador Diaz-Verson Jr. and two of his companies claim Bank of America improperly backed out of financing a land purchase for the Lakewood Ranch arena.

According to DVA Sportsi attorney James Dale Gibson, the $65 million Lakewood Ranch arena deal was days from falling apart when financing between DVA Sports and Bank of America apparently stalled.

In response, Salvador Diaz-Verson Jr. and his companies, DVA Arena LLC and DVA Sports LLC, filed a lawsuit Aug. 24 against Bank of America in Tampa federal court. It alleges a financing agreement between the two entities disappeared two days before the real estate closing for the East County arena.

And while the financial discrepancies ultimately have not hindered the arenais progress, the arenais ultimate cost may be significantly higher than planned.

iWe are still working to assess exactly how much damage there truly was,i Gibson said. iBut it will likely be in the hundreds of thousands of dollars.i

According to the suit, Diaz-Verson, the president and chief executive officer of Diaz-Verson Capital Investments LLC in Columbus, Ga., and former chief investment officer of AFLAC, contacted a Sarasota office of the Bank of America in May about financing the initial 60-acre land purchase for the arena development.

Bank of America and Diaz-Verson eventually reached an agreement, and on May 14, the bank issued a written loan commitment.

The commitment letter offered a floating-point loan of up to $4 million o or 50% of the appraised value of the property o with an interest rate based on the 30-day London Interbank Offered Rate, plus 250 basis points. Based on the August LIBOR rate of 1.6482%, Diaz-Versonis interest rate would have been at about 4.15%.

The loan also required him to have an interest reserve of at least $150,000 with Bank of America and to pay a $20,000 banking fee up front that would be applied to the closing costs for the loan.

The loan commitment had an expiration date of June 1, but the suit says bank officials agreed verbally with Diaz-Verson to extend the agreement until June 25, when DVA Arena was scheduled to close on the Lakewood Ranch land.

Bank of America officials say no such agreement was made.

During an afternoon meeting on June 23 o to discuss the upcoming closing o senior bank officials allegedly told Diaz-Verson the bank would not fund the real estate purchase. Gibsonis suit alleges that bank officials told Diaz-Verson the reason they would not honor the commitment was because it was Bank of Americais policy not to provide funding for the acquisition of unimproved property.

iI am comfortable that they (Bank of America officials) do make land loans,i Gibson says. iRecently, I got a letter from them that says the denial was because the loan commitment had expired. (But) we have e-mails and draft loan documents between Bank of Americais attorney and my client up to three days before the June closing date. Now, if the agreement had expired, why would the bank attorney be working on the closing documents? The reason was they had a verbal agreement.i

Diaz-Verson was left scrambling. It took several contract extensions from SMR before he had the financing in place to close on the land. Gibson says the entire arena deal was in jeopardy.

iWe were very concerned that the whole contract might fall apart,i Gibson says. iAt one point, we got a letter from the selleris (SMR) attorney saying the entire deal would be voided if we couldnit close by a set date.i

Gibsonis lawsuit charges that Diaz-Verson was damaged by having to agree to the different interest rate, terms, fees, charges, and attorney and professional fees.

The plaintiff is also seeking to recover the $20,000 bank fee, plus damages for the closing delay, fees to extend the closing date and detrimental tax consequences and harm.

Unspecified damages are sought for imental anguish, embarrassment and humiliation.i

The suit requests a trial by jury.

Shirley Norton, spokesperson for Bank of America, declined to comment because the bank not yet been served with the lawsuit.

Rex Jensen, president of SMR, declined to comment on the precarious financial situation cited in the suit.

iThat situation is over,i he says. iI would rather focus on the present.i

At an Aug. 31 press conference, DVA Sports officials announced a community-wide contest to name the ECHL team that will call the new arena home. The contest runs through September.

iWe donit want to force ourselves on the county and region,i Kish says. iWeid like them to embrace it.i

A panel of local celebrities will pick 10 finalists. Those names will then be submitted to the community in the middle of October for a final vote.

National Hockey League guidelines require that names and logos be checked with the comprehensive database of existing teams to prevent duplication or copyright infringement. DVA must submit the proposed name to the NHL by Nov. 15 for the 2005-06 season.

The teamis colors will be black, red and white. A name-the-mascot contest will follow the name and logo contest.

Building representatives also discussed the progress of construction on the Bradenton-Sarasota Forum.

Richard Marshall, vice president of Walbridge Aldinger o the company constructing the arena o says rain delayed construction by about a week. Currently, Walbridge Aldinger staffs 25 workers at the job site and another 75 for engineering and planning issues. About 400 workers will be at the site during peak construction times, which should run from April to August 2005.

Developer Chuck Madden says the concourse of the arena will be Category 4 hurricane hardened and able to accommodate about 1,200 people during a storm. The arena could be used as a shelter during a hurricane.

Madden says the arena should follow the example of Germain Arena, near Fort Myers, which has been utilized in the wake of Hurricane Charley.

iThere are still people today in the Germain Arena,i he says.

Brian McMillan contributed to this report. 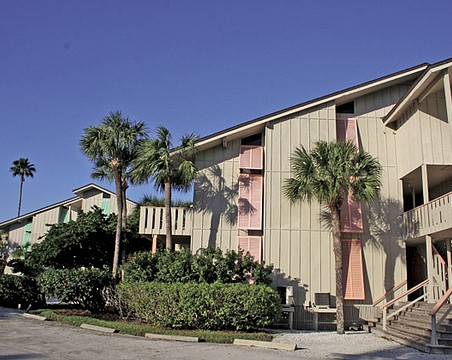 B of A files foreclosure on Colony assets

It's not all bad for Bank of America