iI know there is a deficit of dockage space,i Ravinsky says. iThis will offer secure storage for trailerable boats under 35 feet, which I hear is hard to find.i

The facility will include holding tanks, cleaning facilities and wash bays, he says, adding, iWe own several self storage facilities around the state, but we wanted to get a new location on the West Coast.i

The timing was right for Phoenix Development.

iWe bought it because of its proximity to I-75,i he says. iIn comparison to land prices where we are, the land price was very, very good. Since we put up our sign there, it has been reported that a Wal-Mart Supercenter is planned a mile away. (Also) a 250-acre development has been announced across the street.i

The site should be cleared next month and construction should start in January. The retail portion of the project is slated for the second phase of the development. The entire facility is scheduled for completion in about three years.

iI am very optimistic about what is happening there,i Ravinsky says. iI think (the tenant space) is going to be more along the lines of small retailers. There is possibility of a coffee shop there.

Phoenix Development mortgaged the land to the former owner, Ellenton Associates Ltd., for $600,000.

Truck Junction Inc. purchased a small 1,360-square-foot building and an acre of land, at 4791 Clark Road and 5735 Jason Lee Place in Sarasota from Naomi Wallace Living Trust for $1.25 million.

iWe are going to do some vast remodeling (at the new location),i says Gayanne Davis, comptroller.

Truck Junction Inc. mortgaged the land to the former owner for $834,239.

Neither U-Store-It Trust or Devon Self Storage officials returned calls prior to GCBR deadline.

iThere is an existing shell and sand mining operation there and 120 acres of native habitat on the east side of the property,i says Steve Suau, general manager for Sarasota County Watershed Management.

The county plans to lease the land to Venice Minerals and Mining for its mining operations, which are expected to close within three years, he says.

Suau expects the county to flood the property to create a lake, which would help handle flood water, storm-water retention for irrigation and/or even recreation.

iIt could also provide some additional storage for the water supply,i Suau says.

Curci plans to develop a 6,000-square-foot professional office building, he says, adding, iThe (division of) tenant space will depend on demand, but one tenant would be ideal.i

Construction is expected to start within a year, he says, and should take three to six months to complete. Estimated rental rate for the space is $17 a square foot triple net.

Curci is still negotiating, but he says itis likely heill use Sarasotais Canino Construction. Xavier Calderon is the leasing agent for the new building.

Curci, who used the corporate name of East Bradenton Healthcare LLC for the transaction, mortgaged the land to AmSouth Bank for $326,756.

The property is next to an existing Gettel Kia dealership at 6423 14th Street W., and David Rooks, general manager for Gettel Automotive, expects to expand the dealership onto the Bingo Hall property.

iKia is experiencing incredible growth,i Rooks says. iWe are selling 75 cars a month there now, and we should be able to go to 120 to 140 a month.i

Michael May, president of Quality Concrete and Armor Steel of Southwest Florida, says he is expanding his steel-building contracting business into Sarasota County and plans to build a new office on the Duncan Road site.

iWe are open for business up there now,i May say. iWe may also run Quality Concrete out of there. If Iim lucky we will be ready to move in there in two years. Steel construction is just a very cost effective way of putting up a quality attractive building quickly. A new building shell with slab can cost $20 a (square) foot.i

May typically employs a small in-house crew of six to eight people along with several subcontractors.

i Gloria and William Weed purchased a 1,466-square-foot office condominium at Peridia Office Park, Bradenton, from developer Borderlake LLC of Tampa for about $185 per square foot. Robert A. Brillon, of Realty World o Sarasota, represented the seller, and Gloria Weed, of Coldwell Banker o Lakewood Ranch, represented the buyer.

Broker Mary Beth Hudson and Realtor Greg Hudson will manage the office at the Sarasota Main Plaza on Main Street. Both were formerly with Coldwell Banker Residential Real Estate on Siesta Key.

i The city of Palmetto purchased vacant commercial land from WC Riviera Partners LC for $400,000. Mayor Larry Bustle says the purchase is part of the cityis acquisition of land in Riviera Dunes for an estuary park.

i Keith and Marilyn Goldstein filed a site plan to develop an 8,000-square-foot warehouse building at 2206 72nd Drive E., Bradenton, for Unicorn Video. 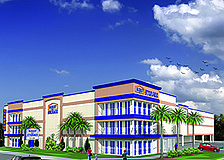