After a year and a half of delays, Liz Breuer is anxious to get started next month on The Savoy on Palm, an 11-story condominium tower.

At this point, The Savoy on Palm, a $36-million condominium project in downtown Sarasota, should have just opened. Instead the 11-story project is a dream on paper for Liz Breuer, president of Floria LLC, which expects to start construction next month.

From 2001 to 2002, Floria fought a contentious lawsuit that cost the developer more than 18 months and about $1 million. In spite of that, Breuer remains optimistic: Floria is ready to start The Savoy, and, after all, "it's just business."

Breuer gained the insight that has carried her through the twists and turns of The Savoy project from a short airplane ride in 1978, Flight 191. "I had just taken the CPA exam in Tampa, and I was on my way back home to Pensacola to prepare for a job in Tampa with Pricewaterhouse," she says.

The National Airlines 727 crashed into Escambia Bay while attempting to land at Pensacola airport in a fog. The plane landed in the water with a team of six crew members, 52 passengers and no life rafts.

"We had no idea we were going to crash," Breuer says. "The flight crew should have never tried to land. They saw the lights of a barge (lost in the fog) and thought it was the runway. The impact was intense. It was unbelievably frightening. All of a sudden I was standing in water. Thankfully, the person behind me kept pushing me toward one of the emergency exits."

Three people died in the crash and others were injured, including Breuer who suffered a concussion. "Fortunately there was a barge there," she says.

In the investigation following the accident, the National Transportation Safety Board determined the probable cause of the accident was negligence by the flight crew.

It was a wake-up call for Breuer.

"You have to appreciate every day you have and try to make the best of it," she says. "I guess it made me more determined to find that tough balance between my business and personal life. (The crash) is not something you ever forget. I actually think about it pretty often."

After the accident, Breuer completed her career transition from journalist to accountant.

She had worked as a broadcast journalist for WNDU-TV in South Bend, Ind., and as a writer and editor for Gosport, the newspaper of the Pensacola Naval Air Station.

"Maybe I was too idealistic," she says. "But I didn't like where things were going. This was right after the end of the Vietnam War."

So she obtained an accounting degree, which led her to a job at Pricewaterhouse, where she eventually advanced to audit manager.

"I also did some legal work for projects that had gone south," she says. "So I started to learn what worked and what didn't. I really wanted to get into the development end of the business."

Two years later, she joined Criterion Development, which developed a large part of Bloomingdale in Brandon.

In about 1980, Peter Wallenberg came to the West Coast of Florida looking for investment property. He eventually bought 25 acres in Charlotte County and land on Longboat Key. In 1982, Wallenberg's P. Wallenberg Development Co. started developing the Charlotte County property near Boca Grande as Placida Harbour Club, a multi-phase residential waterfront community. At about the same time, Wallenberg started developing a 40,000-square-foot retail development in Longboat called the Centre Shops and the infrastructure for nine single-family home sites.

"I inherited a mess of accounting records," Breuer says. "I locked myself in a corner and tried to figure out what everything had cost. It was basically a giant audit for about six months."

At the time, the Wallenberg companies were in the midst of developing two buildings in Placida Harbour and were getting ready to start a five-building phase. But the president of the two companies couldn't manage all the complexities of a multiphase, multi-product project like Placida Harbour, so he was let go, she says. Eventually, Breuer stepped in as president of both companies.

Her first project was to complete Placida Harbour properties, which was an "albatross" from a development standpoint. Breuer says one of her biggest additions to the development process of Placida Harbour was changing general contractors. "I really felt you could pay a little more and improve the quality of the project," she says.

Even so, she inherited the problem of creating a workable homeowners' association for Placida Harbour Club, a 114-unit condominium project; Placida Beach, a 30- unit Island condominium; and Placida Pointe, a 56-lot single-family subdivision. The project was sold in 1997.

While Breuer was working on Placida Harbour, Wallenberg was trying to relocate some of the Wallenberg family trust companies from England and Sweden to Tampa. Breuer leased space for the companies on Tampa's Bayshore Boulevard from Charlie Funk. Funk and his partner Jeff Meehan were interested in building residential and commercial projects in the Tampa market and were looking for an equity partner.

"The first project was Pinebrooke (Commerce Center)," Breuer says. "It was an existing park with 70 acres to develop. They were initially going to just sell off the parcels, but they soon recognized that there was a market for spec office buildings in Brandon. We did our own research and agreed."

With Wallenberg's backing and Breuer watching the books, the partners developed five buildings of about 250,000 square feet.

Wallenberg also financed the private equity portion of Funk and Meehan's Arbor Greene, a 1,300-unit master-planned community in Tampa. P. Wallenberg Development Co. recently sold its interest in the final piece in Arbor Greene after completing about 1,087 single-family homes lots in the development. In addition, the three partners sold land and house packages for 54 homes on State Road 64 in a development called Perico Bay.

"I kept telling him (Wallenberg) that we need to develop in Sarasota," she says. "It's the new land of opportunity."

The company bought a small office building on Second Street. Shortly, thereafter, P. Wallenberg Development Co. bought a former dance studio building at 556 S. Pineapple Ave. "We converted it into a retail building with three tenant spaces and leased it out," Breuer says.

In 2000, the company moved its offices to downtown Sarasota. The company also bought an acre commercial site on East and First streets for a moderately-priced residential condominium.

Then Breuer found The Savoy on Palm.

"I came across a rundown apartment site (at 427 S. Palm Ave.) with a 'For Sale' sign on it," Breuer says. "I was walking around the building checking it out when I saw the water."

After putting a contract on the property, Breuer started researching it. She discovered that another developer previously had the same idea of developing the property, but he had run into major problems where variances were required from the city.

"I was sure I didn't want to get involved in a variance for the project so I started looking at the property around it," she says. "On one side there was a 12-unit apartment complex (401 S. Palm Ave.). I heard that the apartment owner might be interested in selling. I went and talked to them and said, 'Look I know you can't develop your land without ours, and we can't develop our land without yours, so why don't you sell to us?' He finally decided to sell."

So with help from Tampa-based Curts Gaines Hall Jones Architects, Breuer and her staff started designing the 24-unit, 11-story high-rise condominium. Floria LLC, a partnership between P. Wallenberg Development Co. and Placida Properties Inc., was formed to develop The Savoy. In August 2001, Breuer filed a site plan. In November 2001, the Sarasota city Planning Board approved the project unanimously. Things were looking good. Then it fell apart.

A resident filed an appeal with the City Commission, because an employee in the zoning department failed to mail out a legally required notice of the determination letter. The city commission decided that the zoning director had to mail out the notice and reopen the 60-day comment period.

On the last day possible, a resident filed an appeal, and the project was sent to the Board of Adjustment. The board voted 2-2, after the fifth board member left the meeting. "From our perspective, a 2-2 tie meant the appeal failed and the zoning director determination stood," Breuer says.

One Burns Court resident and six residents of the Regency House filed suit in Sarasota Circuit Court arguing the vote was not valid.

"The circumstances that led up to the lawsuit are very unusual," says Mike Furen, an attorney for Floria LLC and chairman of Sarasota-based Icard, Merrill, Cullis, Timm, Furen & Ginsburg PA. "I have never been involved in a case where failure of a city employee to do their job created such a problem."

"At the time we had everything ready to go," she says. "But we still had this cloud hanging over us. We got the call from Mike Furen. He said, 'Liz I can't explain it, but the judge ruled that we have to go back to the board of adjustment.' We asked for a rehearing. The judge refused. We asked for a clarification to see if the person who was missing during the vote could review the transcript to make a decision. Unfortunately, her term had expired by this point, and we would have to go back to the very beginning with board of adjustment."

Furen appealed the case to the Second District Court of Appeal. "The picture that Mike was sketching was not pleasant," Breuer says. "So I told him to look into what we can do to make these people happy."

At the same time, Breuer shut the sales office down. Eight reservations were eventually canceled.

In the end, Floria LLC settled with the seven appellants. The appeals court dismissed a challenge by a separate Burns Court resident.

"The case was over toward the end of February (2003)," Breuer says. "Unfortunately it was too late in the season to do much selling."

In October, Breuer and her staff kicked off a major advertising campaign for The Savoy. Floria has 10 signed contracts.

"We plan to break ground in just a couple weeks," Breuer says. "There will be a 15-month construction period. We should know who the general contractor will be by the middle of March. I think Sarasota is ready for a cutting-edge building that feels like a boutique hotel, with concierge services."

Asked if the lawsuit and delays are still causing problems for the project, she says, "I still hear it." Someone recently asked her if the company was returning deposits.

"I said, 'No way. Where did you hear that?' This has just been a whole series of unbelievable events. But we are survivors."

New on the Block 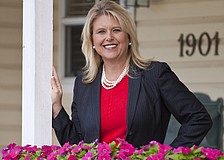