Current residence: Tampa. "I live on the same street that I lived on as a kid."

Parents: Hunt's father, an investment banker, is his boss. His mother was a homemaker when Hunt and his siblings were young. She now works as a paralegal.

Ambition: "I'd like to have this company continue to be successful, have good people that I enjoy being around and work in the company until I'm 80 years old."

Fun: "I love to go to the beach, not to sit there and bake, but go with my wife for walks. I love to be outside.

Charitable work: "Donations throughout the year."

Profile: Kendrick Pierce & Co., established in 1994, is a boutique investment banking firm. The Hyde Park company offers advice on mergers and acquisitions, capital raising and general finance. Typical clients are community banks just starting out to still young institutions with as much as $500 million in assets. Most are based in Florida, with a few in Georgia and the Carolinas. The company usually handles between eight and 10 transactions a year. In recent years, Kendrick Pierce has been involved with the formation of many new institutions, including The Raymond James Trust Co. in St. Petersburg and Coast Trust Co. in Tampa; and advised Tampa's First Citrus Bank in its $5.6 million initial capitalization and Sarasota's First Security Bank in its $6 million initial capitalization.

Focus: Advising community banks that are raising capital or going through mergers or acquisitions.

Staff: The company employs five professionals, including cofounders Hunt and his father, Dick Hunt, and two assistants. When the father and son formed the company, it was just the two of them working in a small office in South Tampa. Shortly after opening, the men moved into the Bank of Tampa building on Bayshore Boulevard before moving in 1998 to the Fleischmann Garcia building on Hyde Park Avenue.

Next: "To continue to focus on Florida and to branch into other Southeastern states - not to physically branch but to hire professionals who can cover Georgia and South Carolina."

Challenge: "The greatest challenge is dealing with multiple clients on a daily basis. Each has a different set of circumstances. It's fluid throughout the day. I might deal with three or four clients in the morning and three more in the afternoon."

Growth: "It's hard to grow without adding people. We want to add opportunistically. It's hard to get people to come to Tampa. I think that's because the investment banking world is so centered in New York that people go there and want to stay there. Tampa is not seen as the mecca of finance. It's a lifestyle. We try to find people who want this lifestyle, who want to move here. In the past four years, we've hired three people that have all been here locally. The people we have our sights on now will have to want to be here in terms of lifestyle. The downside is, in Atlanta or New York, you can throw a stone and hit 10 other investment banks. In Tampa you could throw a stone and not hit anything."

Work week: "I work Monday through Saturday, from about 7 a.m. to 7 or 8 at night. Saturdays, it's coming in to clean up. My office is a mess. I try to come in on Saturday and do expense reports and clean up."

Management style: "I manage myself and I think everyone else just deals with me. We all kind of work together in a group so it's more of a team effort with (me) as a team leader. Stylistically, I think people would say I'm usually late in telling them what to do compared to the time frame they're expecting. I think (my strength) is the knowledge standpoint, being able to help some of the younger team members. Next to Dick, I'm the most experienced. We have two younger guys underneath me. So my strength is having been around a while and conveying to them the knowledge gained throughout the years. My greatest weakness I have is probably being late in telling them (what to do), but no ranting or raving or screaming."

On stress: "Focusing on things that are fun. That might be going for a roller coaster ride at Busch Gardens, going for a walk, going to the beach. We reach points in here where it becomes stressful (but) it's a quality of life issue for all of us not to be overly stressed. The corporate culture is we're all adults and we know the amount of work we have to get done. So if I want to take off (a Friday afternoon), I can take off, but if I have to have something in by Monday morning, I'm going to have to come in before Monday and finish. We're big believers in recharging the batteries."

Mentor: "My father, without a doubt."

Lessons learned: "I wasn't as good at dealing with people 10 years ago as I am now, in terms of understanding peoples' motives and desires. That everyone has a different way of looking at a particular situation. And the emotional side of it and the people side of it was probably not something I was as in tune with. For example, if somebody's selling their company or selling their bank, different people involved will have different thoughts and different ways of looking at the situation. I wish I had known that 10 years ago."

Career history: "My father used to drag me around to board meetings when I was four years old. His first company was called the Hunt Group, which was sold to a company called Ryan, Beck & Co. in 1992. He dragged me around; I had a choice of sitting in the car or sitting in the boardroom and being quiet. So I chose air conditioning. When I was 15, I started coming in, and I'd run the copy machine. In 1989 I started working fulltime (for the Hunt Group)." In mid-'94, Hunt and his father took control of a trust company in Colorado, Trustamerica Group Inc., and at the same time, formed Kendrick Pierce & Co. The younger Hunt served as vice president of Trustamerica and its subsidiary, Trust Co. of America. 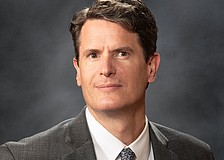