The incoming president of the Greater Sarasota County Chamber of Commerce shares his early impressions and vision for the county.

Steve Queior, president and chief executive officer of the Greater Fort Lauderdale Chamber of Commerce, leaves that post in three weeks to move to Sarasota. He was selected from more than 100 applicants for the top spot at the Sarasota chamber, a chamber that has suffered deficits, leadership disputes and instability over the last decade.

Previous chamber President Rex Richards resigned in April. Sarasota chamber leaders believe Queior (pronounced Quee-or), with 28 years of chamber experience, is the right person to bring stability to a chamber that is once again just finding its legs ¦ and its profits.

He will move here with his wife of 28 years, Katie, a nursing manager.

The Review: Why are you choosing to leave the larger market of Fort Lauderdale?

Queior: Bigger isn't always better. Fort Lauderdale is a great place. But consider that in Sarasota, there are about half a dozen municipalities; there are about 30 in Broward County. There are about four or five smaller chambers of commerce in Sarasota County, like the Venice chamber, but there are 18 to 20 in Broward County. It's harder to bring everyone together. Due to the complexity with how the Broward market grew up, it might take one to two years to build a coalition for a deal or project, and by the time you get to the decision, the original decision-makers may be gone due to the cycle of change, and you have to start over.

The appeal in Sarasota is that this community has one of everything - health care, educational resources, all those things. But it is reasonably sized enough so you can get to the various resources.

Q: When you interviewed in Sarasota, what impression did you get?

A: That it is classy. For a mid-sized community, there are broad and deep resources from the cultural arts to education. I am impressed with the commitment people here have to the market area and to the community. There seems to be a little more willingness for people to take time to work together and listen.

For example, the chamber officers have spent a lot of time in the last few months rolling up their sleeves and going to meetings and participating on committees that will be part of my job. They were not going to let those things slip while the president seat was empty. They stepped up and did extra duty.

Also, during my three to four interviewing visits, I would talk with Realtors and people in hotels. The word of mouth advertising for Sarasota is great.

Q: What do you see as Sarasota County's economic strengths?

A: The strength is the location - the Tampa Bay region is a very strong area in a strong and economically growing state. The quality of life elements are an asset. There is a book called "The Creative Class" that argues that the successful communities and regional economies are going to be those that support the creative class, not just artists, but software writers too. Sarasota is perfectly positioned, like Austin, Nashville and Boulder, to appeal to that class.

But you can put some things on both sides of the strength/weakness equation. There are a lot of talented people here. The challenge is to grow the labor force with the right types of skills to go forward.

Q: What do you see as the weaknesses right now?

A: Maybe I have not run across it yet, but I have not seen a lot of consensus of vision for the city/county community. Sarasota and the whole area are in an enviable place of being able to attract residents, business activity and tourists. Yet to have a sustainable economy, you need consensus among the residents, the businesses and the government as to where you want to be between 2010 and 2020. If there is a current consensus, I'll get up on it. If not, the Chamber is well positioned to lead that.

Q: How have you worked to help diversify Fort Lauderdale's economy?

A: We did a lot of work with international firms, which was one of the really creative things about Fort Lauderdale. I went to Germany on an inbound trade mission, and talked with companies there about putting a beachhead location in Fort Lauderdale. One Norwegian company opened North American operations in Fort Lauderdale - it started modestly, with only 12 employees, but the company executives wanted a nice place to spend a week or so each year.

In Fort Lauderdale, we are just getting into the biotech and Internet areas. It's important to broaden and diversify the economy and grow it to create higher wage jobs. At both the Fort Lauderdale chamber and my previous midwestern chamber (in Indiana), we created regional capital development clubs. Florida has been up and down in venture capital. Sarasota can be using its Tampa Bay Partnership connection and grow its own venture capital sources.

Q: What are you known for?

A: People describe me as a builder of or participant in strategic coalition. In the Midwest, we built a Regional Approach to progress with eight communities and publishers and businesses and chambers, so the Legislature would take more notice of us.

We built healthy communities, coalitions of labor, minorities, government and others, to work on particular issues. We built CONNECT, a coalition on education and training, bringing together training entities and schools and others to work on K-12 and secondary training issues.

In southeast Florida, we are building a growing council of commerce to bring together a multitude of chambers and trade associations to work on different issues. We created a minority business council to help grow that sector of the economy. I have a real teamwork approach.

Q: The Sarasota chamber has had an unstable recent past - is that daunting?

A: Anything we can learn from the past is good. But it is the past. I am very comfortable with the current and future leadership of the chamber and staff leadership. There is more work to be done than all these players will ever get to. Our goal is to work with the people already in place as strategically as possible to move forward.

Q: What can we expect from the chamber?

A: We are about to start a long rolling period of chamber incremental progress. I was a college wrestler. I won most of my matches by preparation, planning, conditioning and not making wild mistakes. It's a kind of continuous quality improvement approach, instead of doing something crazy and have it blow up. I'm looking for any short-term progress, but that will be balanced by mid- and long-term progress.

Q: After suffering a deficit, the chamber is reporting a profit this year. How will you ensure that trend continues?

A: On the revenue side, there are always opportunities to grow membership, which has other benefits besides financial. In non-dues revenues, there are marketing and advertising opportunities that are win-win situations, such as a company happy to pay for exposure on our website. We can also try to get grants.

On the expense side, we look at management discipline - being efficient and effective and watch the details and work the plan. It may sound like it's not heavy lifting. But just because the chamber has not-for-profit tax status, it doesn't mean we can disregard good business practices.

Chamber's No. 2 to Retire 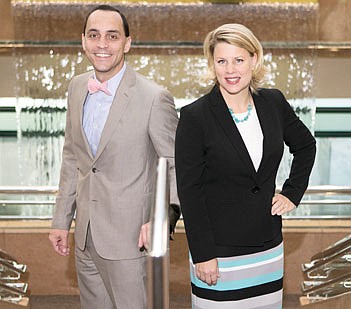 The 'greening' of Sarasota is game on

Chamber chairman never gets his chair