The sale will keep Quality Carriers’ day-to-day operations in the city and will preserve “over 99%” of current jobs, according to a statement. As part of the agreement, Quality Distribution’s other subsidiary, Boasso Global, will become a standalone company that will also be headquartered in Tampa. The Quality Distribution name will eventually be phased out, the release states.

The companies are not disclosing financial details of the sale, which is expected to close during the third quarter of this year, according to a spokesperson.

The sale allows Quality Carriers, which operates the largest dedicated bulk tank truck network in North America, to become a standalone entity under the CSX umbrella.

This, according to the statement, will give its customers “access to a wider range of cost-effective shipping options.”

One job that will be affected by the sale is that of Gary Enzor, Quality Carriers’ CEO and chairman.

Enzor, who called the deal “a tremendous positive,” will step down from both positions once the transaction is complete. He will retain a seat on Boasso’s board. Randy Strutz, Quality Carriers’ current president, will remain in his position as will the company’s senior leadership.

Joe Troy, a member of Quality Distribution’s board and CFO, will become Boasso’s CEO.

As for other jobs, only about five of the about 2,500 employees will be affected, according to the spokesperson, and “some of those five accepted alternative positions in the new set up.”

Quality Carriers’ network of independent owner-operators and affiliates will not see any changes to day-to-day operations, the company says.

Jacksonville-based CSX is one of the largest transportation companies in the country. It had $10.5 billion in revenue in 2020, down 11% from 2019. 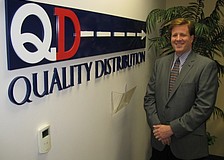