A pair of recently completed, high-profile investment transactions in Winter Haven and Polk City illustrate that Polk County continues to be a viable market for buyers ­— especially of industrial product with credit-worthy tenants.

The larger of the two sales involved a new Best Buy Co. Inc. distribution and service center completed in May. The 650,808-square-foot building, at 8906 Highway 33 North, in Polk City, was sold for $40.63 million to an affiliate of Phoenix-based Tratt Properties.

“We’re very bullish on the growth prospects for Florida and the whole Southeast region,” says Jonathan Tratt, the company’s founder and managing principal.

“And I think this building serves as a microcosm for everything that Best Buy has done as a company, to reinvigorate themselves and remain competitive. Theirs is really an amazing story.”

He also describes the Scannell Properties’ build-to-suit on 46 acres for Best Buy as a “state-of-the-art logistics facility” for an “e-commerce leader.”

In the other major sale, a New Jersey-based investment firm with decades of experience has acquired a Sherwin-Williams Co. distribution facility in Winter Haven, just east of Lakeland.

“We have a credit tenant with a long-term lease that’s mission critical,” says Profeta. “This asset supplies all, or many of, their stores throughout Florida. They’re not going to be moving out in five years, and that was one of the many things we liked about the property.”

Under terms of its triple-net lease, Sherwin-Williams could occupy the 400 Winter Haven Blvd. building through the mid-2060s.

Profeta says the property, which was purchased with 1031 tax-deferred proceeds from the sale of a New Jersey industrial portfolio, marks the company’s first in Florida.

But it may not be the last.

“We like Florida,” he says. “Obviously, the whole Lakeland and surrounding area is one of the top distribution submarkets in the entire country.”

“It’s really a locational story, when you get right down to it,” he says. “Central Florida is simply the best place to distribute goods from to a number of markets in any direction, given how many places one can reach within a five-hour time period via tractor trailer. For logistics firms, that time period is critical.”

He adds that unlike so-called “gateway” cities in Florida, Central Florida locations like Lakeland, Plant City, East Tampa, Davenport and elsewhere have not experienced sharp increases in the price of land.

“Though there has been appreciation this cycle, pricing throughout much of the Interstate 4 corridor has not caught up to other markets known for distribution, such as Jacksonville, Miami or Orlando,” Ralston says.

Pricing ­— and the existence of a credit tenant on a long-term lease — was one of the primary reasons his firm invested $87.65 million in early 2017 to buy a 1.02 million-square-foot fulfillment center fully occupied by Amazon.

Its deal for that Lakeland property, like Profeta’s July purchase, marked its first in Florida.

But the process of acquiring the industrial property opened his eyes to the benefits of buying in Central Florida.

“It’s a value proposition,” Tratt says of the area. “In the wake of the Amazon purchase, the more things I looked at there the more I liked what I saw.”

He notes there are many similarities in product type between the Amazon building and the one occupied by Best Buy.

Both buildings, for instance, have 32-foot-clear ceiling heights. Both have cross-dock loading. Both have ample trailer parking on site. Both were build-to-suits with modern-day distribution methodology baked into their design.

He even considers what he describes as the retailer’s below-market rent to be a plus over the long term.

“Without going into great detail, the rent on the building is exceptionally low,” Tratt says. “The tenant got a great deal, and I imagine they negotiated very aggressively and knew that they were desired because of their size and credit worthiness.

“But to me, that represents a value in and of itself,” he adds. “Because in a worst-case scenario — and I’m not suggesting this is going to happen, I happen to believe Best Buy will be around for a long, long time to come — if the tenant were to blow up we would still own a Class A building that would be valued in the marketplace because of its location, size and amenities.

“In today’s world, with so much change occurring, you just never know.” 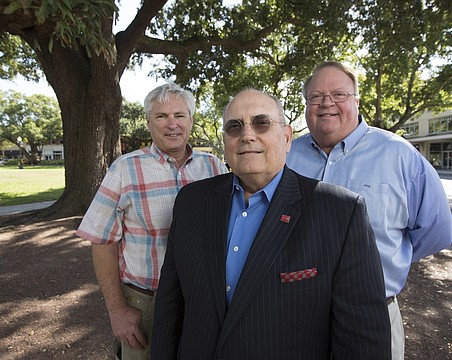