“Naked in the Glades” promises to be exactly what it sounds like.

“I'm going to throw naked people out there,” says Chuck Ardezzone, who will film their survival tactics in the swamp and shop it to the television networks.

Welcome to the world of reality television, where filmmakers like Ardezzone find intriguing characters, film them and gamble that the television networks will turn them into a money-making hit.

While “Naked in the Glades” is a work in progress, another reality show produced by his company, Naples-based ITZ Media Group (the initials stand for In Trouble Zone), will air later this year on Country Music Television. In five one-hour episodes, “Tobacco Wars” will follow two fifth-generation tobacco men who toil in remote Kentucky.

If “Tobacco Wars” or any of 20 reality shows Ardezzone has already created hit it big, the payoff could be huge. Consider that “Duck Dynasty,” the show featuring a Louisiana swamp family that makes duck calls, has generated $400 million in merchandise sales alone. The entrepreneur who found them sold his production company for $40 million.

Ardezzone, an actor with appearances in numerous films and TV shows, also has produced a movie called “Hybrids,” a comedy starring Paul Sorvino. “If it does $5 million we do well,” he says.

But all this production costs money. Ardezzone estimates he's spent $1 million on reality television shows and film production over the last 18 months. “We're creative and we want to do things that are fun,” Ardezzone says.

To fund the reality television and film production, Ardezzone built a successful business in Naples shooting television commercials for clients ranging from auto dealers to restaurants and real estate firms. “The commercials have been our bread and butter,” says Ardezzone.

But Ardezzone and business partner Frank Monti say they're looking for investors to share in the expenses and potential payouts of a big hit. With Tobacco Wars and three pilots sold to television networks, Ardezzone is hoping that will attract the $1.1 million he estimates he needs to create another 20 reality television shows.

Reality hits
Born and raised on Long Island, Ardezzone has appeared in numerous films and television shows in supporting roles. Those ranged from a fight scene with actor Ryan Gosling in “The Believer” to appearances on TV shows “Law & Order,” “Third Watch” and “Hope & Faith.”

Ardezzone, who carries an iPhone case in the shape of a knuckleduster, has played tough guys like cops, thugs and construction workers. “I'm not your leading man,” he laughs.

In 2001, Ardezzone visited his parents at the Pelican Bay development in Naples and met a woman who would become his wife, Heather. He moved to Naples in 2004 and started a small production company. “I was a broke actor,” he says.

Ardezzone had starred in a reality show that year called “Average Joe,” in which a dozen ordinary men try to win over a supermodel. Although he didn't win, he says the six weeks he spent shooting the show in Los Angeles taught him what happens behind the scenes. “I'm going to do a reality show,” he decided.

But to fund the shows, Ardezzone had to make money shooting commercials. One of his first clients in Southwest Florida was auto dealer John Marazzi, who at the time was running Fort Myers Toyota. “I had this crazy idea that we wanted to break the world record on pre-owned sales for one month,” Marazzi says.

Together, Ardezzone and Marazzi created a reality show where they filmed the sales at Fort Myers Toyota and bought television time on the local NBC affiliate to air it. The show was a success as people lined up to buy cars and be featured on the show. Marazzi sold a record 719 used cars in one month, beating the world record that he says was 600.

Marazzi says Ardezzone has the twin skills of creativity and business acumen. “Normally creative people are so out there that the ideas don't work and they're not applicable to business,” Marazzi says. “He has that innate ability to come up with creative ideas that make good business sense.”

When Marazzi became a partner in the Nissan dealership in Naples, he invited Ardezzone to build out a production studio in empty space in the dealership's second floor. “I got free space, and he wins because he's got us 24/7,” Ardezzone says.

“Normally an automotive dealership would do one spot and run it for 90 days,” Marazzi says. “We had three or four spots running every week. What it allowed us to do is move at the speed of light.” The result was the Nissan dealership broke sales records, as a new commercial would hit the airwaves every three days. “My Nissan store ended up outselling the Fort Myers store,” Marazzi says.

But Ardezzone's passion remained in reality TV shows and films. He started producing sizzle reels, which in television lingo is a five-minute film that reveals what the show is about.

With 20 sizzle reels, he and business partner Frank Monti shopped the shows to the various networks and cable television companies. If a sizzle reel captures the fancy of a network, it may agree to buy a single episode called a pilot to test with its audience.

So far, ITZ has sold three pilots to Discovery, A&E and TBS (you can view them online at introublezone.com.), including a reality show called “V8 Muscle Bikes” that pits two competing garages installing car engines on motorcycles.

If a pilot is successful, a network will buy a season, which usually consists of eight half-hour episodes. For example, CMT bought a season of “Tobacco Wars,” which will air as five one-hour episodes later this year.

Ardezzone's success so far has garnered him favorable press in the trade journals such as Hollywood Reporter and Variety magazine. “Now, every network is taking my calls,” he says, noting that being in Naples is an advantage because people remember that he's not in New York or Los Angeles. “We're the guys in Florida,” he says. “In L.A., they're a dime a dozen.”

Networks are particularly keen to feature family-owned businesses, where tension and conflict often erupt. “They're not crazy about hillbillies anymore,” he says.

ITZ recently held a party for investors at its new production studio in an industrial area of Naples near the airport. “To do 20 more we need more money,” Ardezzone says. It can cost $50,000 for a sizzle reel and as much as $500,000 for a half-hour episode of a pilot.

Ardezzone says one hit could easily pay for 10 episodes that don't make the cut. In a first season, you can double your money. Subsequent seasons and merchandise sales could be a windfall for everyone, including the talent that negotiates a percentage of sales, he says.

Movies are riskier because of the higher expense, but the payoff could be even bigger. The film “Hybrids” is due out later this year, but it could be a $5 million payoff, he says.

Investors could buy into one reality show or 10. “I'm open to both right now,” Ardezzone says. Typically, investors get their money back and split any profits.

Despite the long hours of shooting and editing, you can sense the excitement at the ITZ studios that something big is going to happen. “I like to have fun at work,” Ardezzone smiles. 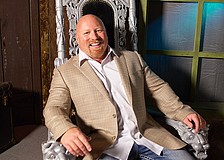