Headed for a Fall?

Headed for a Fall?

The Sarasota metropolitan area is in danger of experiencing a painful drop in home prices.

That's what an economist for a Cleveland banking company thinks. Richard J. DeKaser, senior vice president at National City Corp., says Sarasota is one of 16 U.S. markets where residential property values are rising too fast for household incomes.

When that has happened elsewhere in the country, DeKaser says there was usually a market correction that depressed prices within a few years by as much as 27%.

"This study shows that some cities currently may be in the midst of a housing 'bubblette' and there is greater risk in these areas for corrections," DeKaser says in a news release that accompanied his findings.

One of those cities is Sarasota. DeKaser estimates that Sarasota housing is overvalued by 22%. Based on historical trends during the past 25 years, DeKaser says a market with a 20% or higher premium is significantly overvalued and could be due for a fall.

By contrast, Tampa residential real estate is slightly undervalued, according to DeKaser.

Half of the 16 overpriced cities are in California, with Los Angeles and San Francisco home prices ahead of household incomes by 30% or more.

Sarasota has the distinction of being one of only three Florida cities to make DeKaser's sour 16. The other two metro areas are Miami and West Palm Beach.

It wasn't always that way.

In 1980, Sarasota housing was a bargain. DeKaser's data show area homes were undervalued by 45% a generation ago.

Prices stayed reasonable, if not undervalued, for much of the 1980s. Sarasota residential real estate didn't consistently escalate into double-digit overvaluation until the early 1990s. Even after that, prices retreated for a while, in comparison to income.

Since 2001, however, Sarasota's overvaluation has climbed steadily to the current high.

The median price for a Sarasota home in 2004 was $445,216, according to DeKaser's regression analysis. He says the normal price should have been $364,295, based on what the area's median household income suggests the average buyer could truly afford.

Five years ago, the median price of a Sarasota home was below $300,000, according to DeKaser.

Since 2000, median household income in Sarasota has risen 13% while housing costs has shot up 52%.

Judy Schomaker, president of the Sarasota Association of Realtors, sees no cause for concern.

"I definitely don't think we're overvalued," says Schomaker. "It's a seller's market. It's one of the best sellers' markets we've seen in a long time."

"To me, this is more of a correction in the other direction," says Najmy. "We're going from undervalued to more of what the market should be."

How could DeKaser, who previously worked at Bank of Boston, Data Resources Inc., and the U.S. Department of Commerce's Bureau of Economic Analysis, be so wrong?

Schomaker points out that Manatee County, which is part of the Sarasota metropolitan statistical area, probably drags down the overall income levels. In addition, some of the investment returns of Sarasota retirees may not be fully reflected in DeKaser's household income numbers, she says.

Owner-operated small businesses, sometimes based at home, are the backbone of the local economy. Those residents can adjust their taxable income by using depreciation allowances or keeping family automobiles on the company books.

That would throw off the accuracy of raw data that a researcher such as DeKaser might obtain from the Internal Revenue Service or U.S. Census Bureau, according to Jonsson.

Bankers say they have noticed no shortage of creditworthy mortgage applicants. "I'm not turning away very many people who aren't being qualified," says Jonsson.

"The construction people cannot keep up with demand," adds Najmy.

Schomaker says Sarasota is a special place that defies easy categorization from a national vantage point.

"We have opera, a symphony, a ballet, one of the best museums in the state," says Schomaker, sounding like the real estate saleswoman that she is. "It's a small city with some of the most gorgeous beaches in the world. You don't find all that in many cities of Sarasota's size."

DeKaser used computer modeling to try to compensate for factors such as cultural amenities, wide income disparities, weather and other factors within the 99 metro areas he examined.

Economists should focus on individual markets and avoid generalizing about the entire country, says DeKaser. "National price declines are rare," he says. "None has been recorded in the past half century."

If DeKaser is right about Sarasota, though, how do homebuyers continue to afford the outlandish prices?

Do buyers tend to be affluent outsiders who can hide a good chunk of their passive income from the IRS, and thereby cloud DeKaser's statistical radar?

Or have speculators descended on the Sarasota market to drive up prices and lug away fast profits before the collapse of perhaps unsustainable values?

Schomaker acknowledges there are a lot of buyers who aren't moving in right away. But that doesn't mean they are quick-buck artists.

Northern Baby Boomers are buying winter homes up to 10 or 20 years before they retire to lock in mortgages at today's low interest rates. "They're afraid they're going to be left out," she says. "It's a hedge against the appreciation that we've been seeing in Florida."

So a downward spiral in Sarasota housing prices is impossible, right?

That same sentiment could have been floating around desirable locales such as Eugene, Ore., and Seattle in 1980, Hartford, Conn., in 1988, and Boston in 1990.

Those were peak years of what turned out to be localized real estate bubbles, says DeKaser. Within as little as four years, market corrections brought prices in all four cities down by at least 20%, he says.

A Cleveland bank says Sarasota is among the most excessively priced housing markets in the nation.

Income gains on the horizon 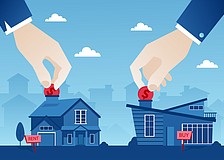 Report: Cheaper to rent than buy in several areas 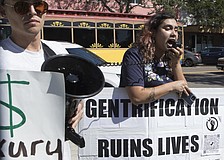