The ADP Group's growth mirrors the area, leaving the company with a large backlog and looking to change.

Instead of a sparsely used retail office complex, the partners see a sparkly development of condominiums, a hotel, retail and office buildings and a roundabout. In place of a crack house surrounded by rundown homes, they see corporate headquarters in a quaint growing theater district.

Where others saw a design firm bleeding red ink, which owed a quarter of a million dollars to creditors, they saw an opportunity. They were right.

In the past 20 years, The ADP Group Inc. has gone from a debt-ridden design firm to Sarasota's largest architecture, interior design and land planning company.

ADP's name is now attached to the biggest projects in the city: Plaza at Five Points, Plaza Verde, the interior redesign of an Arthur Andersen office building, Sarasota Memorial Hospital's master facilities plan, The Rivolta Group's Rivo at Ringling and Patrick Kelly's proposed Sarasota Harbourplace project at the Sarasota Quay. Because of a relationship with Halfacre Construction Co., the firm is designing an $8 million warehouse-distribution center for Anheuser-Busch Cos. in Tallahassee.

This year alone, sales have jumped up 60%, and the firm has grown from 20 full-time employees to 32, along with three contract employees. Currently, the firm has more than $175 million of development planned or under construction.

No one can accuse the partners of not having vision and that vision has allowed the company to capture marketshare for 20 years.

The framework for The ADP Group was a small architectural design firm called Architects Diversified Inc. (ADI), founded in the late '70s.

After a stint as the head architect for the Ramar Group, Town joined ADI in 1980. Eventually Town opened the company's first Sarasota branch office and managed it.

Shortly after that, Franklin, an architect and urban planner, went to work for ADI setting up a new subsidiary land planning company - Land Resource Strategies Inc. The goal of the new company was to assist developers in getting their projects through the regulatory and permitting review.

In 1982, Suarez joined LRS as an architect and planner primarily to aid in the company's major land planning projects.

"I had run a small architecture firm in Puerto Rico," Suarez says. "I was working 12 hour days. When I sold that company I told (my wife) I planned to slow down and go to work for somebody else. We (the partners) all have some background in managing a firm."

Although, ADI was working with a number of the major developers in town, including Pat Neal, Arvida and Piero Rivolta, it was struggling financially. Its owner had amassed about $250,000 in debt and decided to sell.

"We had to make a choice. Either we would buy it or we had to find another job," says Town. "Born out of necessity we became fast friends." So in 1984, the three principals acquired the company.

"We paid him a dollar and acquired the debt of the company," Franklin says. "When we went to get financing First Florida Bank went out on a limb for us. (It) gave us a line of credit and enough capital to pay the immediate debt to our vendors. They had an understanding that we would be going through a transition."

That transition didn't take long. By its first anniversary the company - called The ADP Group after its main services: architecture design and planning - had eliminated the debt and was turning a profit.

"We wouldn't have done it if we didn't think we could turn it around," Franklin says. "For one thing we got more aggressive in collecting receivables. We had a substantial client base for a small firm; we just built on them. We have been very fortunate to maintain some of relationships on an on-going basis. Bob (Town) went out and got more business."

At the same time, the partners consolidated the business's Bradenton office into its Sarasota location, across from city hall, and made other internal changes to improve operating costs. The company employed a total of eight people.

But all of the partners believe the biggest changes came in the area of pricing and customer service.

"It was more realistic pricing ... more proper pricing," Houk says. "Before the pricing had been unrealistic - along with the scheduling. The new pricing was much more accurate and our customers could count on it."

Town and Suarez coordinated the design staffs, while Franklin provided permitting and regulatory-use assistance as well as overall management of the firm.

In 1988, Houk, an architect who had been general manager of building systems for a BirdAir Corp. manufacturing facility, a division of Owens Corning, interviewed to take a project architect position with The ADP Group. But it was Houk's record keeping and business management experience rather than his design talent that interested the firm.

"He came at the perfect time," Suarez says. "At that point we were too small to have a business manger and too large not to have one."

Houk jokes he was hired after he promised never to pick up a drafting pencil. He took over the company's human resources, marketing and business management services.

One of the ways the firm made its reputation was through its relationship with the city of Sarasota and county. The firm worked closely with the land planning and development regulations, including working on a vision plan for the redevelopment of the city.

In the mid-'80s, The ADP Group was pushing the city to designate a theater and arts district on the west side of downtown. "We helped the city write the zoning district guidelines," says Franklin. "We thought it made sense because of the Florida Studio Theatre and the opera house."

The partners describe the downtown area at the time as depressed with almost no private sector investment.

But, then toward the end of the '80s, the company took the plan to the next level - actually developing in the dilapidated neighborhood at Cocoanut Avenue and 2nd Street.

"There were a lot people saying this was crazy," Suarez says. "This was a crack house next to several old single-family houses when we bought it. This was before the creation of Five Points Park. This was going to be the first building in the newly created district."

The development was not well timed. Between 1990 and 1991, with the collapse of the savings and loan system, real estate investment capital dried up.

With Town, a licensed contractor as well as an architect, working with the construction crew to keep costs low, and an extra line of credit, the firm was ultimately successful.

"We had the first signature building here and were the first to contribute to the public art fund in the theater and arts district," Franklin says.

Further, Franklin says the recession forced the partners to refocus the company less on private developers, which at the time made up more than 95% of its business, and more on health care, nursing home and education clients - industries that are more recession proof.

Aside from its own office, The ADP Group has left its mark on the Sarasota County in a number of ways. The firm has been the project planner on the 15-year redevelopment of the Sarasota Quay leading to the firm's current connection to Kelly's Sarasota Harbourplace. The firm also designed the new Chamber of Commerce building, the Southwest Water Management District headquarters, Morton's Gourmet Market, the redevelopment of Southgate Plaza, Sarasota High School, Southside Village, the first two North Port schools and North Port's first fire station

"(The North Port projects) were in the mid-'90s; we saw that the city was going to grow significantly," Suarez says. "We saw with this capital investment we could help to develop the image of the community."

Asked why clients come to the firm, the partners pointed to their varied experience and track record.

"People know we can take a property all the way through the review process," Franklin says. "Very often I am the first person contacted because of our capabilities. We have such a strong basis in land planning, permitting and government relations. We have all these services under one roof."

"Our (employee) turnover rate is almost zero," Houk says. "We have had a couple of people make career changes. But it's really a family firm. We don't add staff unless the backlog is there. Fundamentally though, the people, who come to us, know we can handle the work. That we deliver. We have a solid track record."

The partners also established relationships with civic, governmental and social organizations. Its principals are members of the county Chamber of Commerce, the Argus Foundation, Sarasota County Openly Plans for Excellence, the American Institute of Architects, the Education Foundation, the Boys and Girls Club and the United Way. The firm has also been active politically joining a group that opposed a bus transfer station downtown and served as a plaintiff in a legal challenge to the city's comprehensive plan.

"With our country club work we are trying to be very proactive," Franklin says. "We are really marketing this statewide. Along with our growth we plan to expand this into the Caribbean."

"It had a really big impact on us more personally than anything else," Franklin says. "You can prepare a firm to handle the business transition of a death of one of its partners, but you can never really be prepared personally. It was very difficult for all of us."

The biggest impact of the death to The ADP Group business-wise was in the county club market; the firm has since hired several staff members to help with that market.

For the past 20 years, Suarez and Town have continued to manage the design teams, but that is about to change following the recent heavy activity.

"We have gone from eight to 35 (employees) with a business structure that was fairly horizontal," Suarez says. "But we are looking at restructuring now that we have grown so much."

This change also involves an additional marketing effort in order to create even more of a public image. The new larger company has the benefits of offering economies of scale in terms of training and technology.

"We don't want to have another year like last year," Houk says. "This has just been a year from hell for all of us. We were all borderline burnouts. We want our growth to be much even tempered. We are going to have to use a vertical integration. This also forces us to be more choosy in our backlog."

"We are all in our 50s," Franklin says. "We plan to promote from within. We are looking at a number of personnel. Our goal is to allow them to buy into the company. But that is five to 10 years from now." 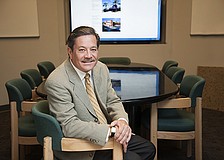