iWe are hoping to start sometime after the first of the year,i Rodgers says. iThe parcel has already been rezoned.i

The Rodgers family was the developer behind the 1,355-home Pelican Pointe Golf & Country Club in Venice. Gran Paradiso I and II mortgaged the property to Colonial Bank for $45 million.

On an additional 810 acres in the 7,800-acre Thomas Ranch, DiVosta Homes plans to develop another village-concept with a 2,000-home project called VillageWalk of Sarasota.

Both properties are in a special taxing district, which allows the developers to assess an additional tax to cover infrastructure costs.

iWe are probably going to build a shopping center,i says Brett Hutchens, president and CEO. iWe know itis a good purchase. We have been negotiating on it for a couple of years now.i

Asked what broke the logjam, Hutchens responded, iWe probably wore each other down.i Casto, which used the corporate name of Casvak River Club for the transaction, mortgaged the property to Branch Bank and Trust Co. for $3.65 million.

Hutchens says so far about 90% of all the retail in the Main Street at Lakewood Ranch has been leased. The Whole Foods Market, located in Casto and Zenith Insurance Co.is One Hundred Central and Whole Foods Market Centre in downtown Sarasota, is scheduled for a grand opening early this December.

Osprey-based Tervis Tumbler Co. purchased about 6.5 acres off Knights Trail near the intersection of Laurel Road and Interstate 75 from Triple Diamond Commerce Plaza LLC for $1.8 million. Company officials say they plan to develop a 60,570-square-foot building, which is more than twice the size of its existing Osprey facility.

iBecause of our strong growth over the past five or so years, we have been continuously adding personnel, materials and equipment to meet demand,i says Tervis Tumbler Chief Financial Officer Laura Spencer.

The manufacturing building is being financed through a tax-exempt industrial development bond and a letter of credit from Bank of America.

Sarasotais George Palermo Architect Inc. designed the facility. The new building layout is loosely based on the Sun Hydraulics building in Sarasota.

The company is investing about $7 million to build the facility and add equipment that will expand company production. Construction is expected to begin before year-end, with completion planned for the summer.

The company plans to renovate and enlarge its existing Osprey location to make room for a larger Tervis Factory Store.

The firm is renovating the interior and plans to move in during June, says Gary DiDonna, Prime Financials chief financial officer.

iWe have 19 employees right now, but we plan to be close to 35 employees in the next year or two,i says DiDonna. iThis office was established three-and-a-half years ago with four peoplei

In the short term, the financial-services company plans to sublease 3,000 square feet.

The company sold more than 1,500 homes priced at $1 million and above throughout the state and its luxury home division, Coldwell Banker Previews International, has closed nearly $3 billion in luxury homes for the third quarter ending Sept. 30.

iThere has been speculation over the past few months that there was too much inventory at the high-end of the market,i said Sue Louis, Coldwell Bankeris Sarasota Bay Regional senior vice President, iBut as I have said, it is a unique time in Sarasota. We have more projects going on now than at any other point in our regionis history. There is more opportunity for luxury home buyers than ever before, and according to our data, there is no shortage of demand.i

Since the Ritz-Carlton Sarasota opened in November 2001, developers have constructed or proposed more than $1 billion in new development downtown.

Coldwell Banker officials say they expect continued strong demand in the luxury market because of demographics. The company reports that the number of families nationwide earning at least $100,000 annually will rise from 15 million to 20 million by the end of this decade. Only 9 million households were in this category in 1990, according to the National Association of Realtors.

At the same time, older affluent baby boomer households, headed by people ages 55-64, will increase by more than 60% within the next several years. This group will top 4.2 million people in 2010, nearly doubling the nearly 2.7 million members today, according to RisMedia, known as The Relocation Information Service Inc. and a leading independent provider of news, information, reference publications and consulting services in the real estate and relocation industry.

i Lennar Communities has broken ground on Stoneybrook at Venice, a residential development on 545 acres at the northwest corner of North River Road and Center Road in south Sarasota County. The development will feature a mixture of 750 single and multifamily homes. Construction on model homes from Lennar Homes and US Home Corp. has begun.

Lennar Homes and U.S. Home have built more than 12,000 homes in 25 neighborhoods in Sarasota, Manatee and Charlotte counties.

i Bradenton-based Bruce Williams Homes, the largest locally owned homebuilder in Manatee County, reported sales of 376 new homes from through Oct. 10, which represents more than $114 million.

Peter Mason, vice president of sales and marketing at Bruce Williams Homes, says new home sales in 2004 are running about 75% ahead of last year. iIn 2003 we sold a total of 251 new homes,i Mason says. iFor 2004, we passed that mark two moths ago.i

i Moore Employer Services has announced plans to move its headquarters into a 4,200-square-foot space at 1215 Manatee Ave. W. The company employs 11.

i Bradentonis Bruce Williams Homes plans to construct a new 5,000-square-foot office building in downtown Bradenton adjacent to the homebuilderis corporate headquarters that will serve as the new home for its design center. Peter Mason, vice president of sales and marketing for Bruce Williams Homes, says the new center will occupy 3,600 square feet in the new building. The remaining space will be allocated to the homebuilderis mortgage company and affiliated companies.

Bruce Williams Homesi DesignStudio is currently located in the WhisperBend community on State Road 70 in Bradenton.

David Fields, co-owner, says adjacent waterfront property is being bought. The company plans to develop large spec homes on the water in the $3 million to $6 million range.

i Kourosh and Saba Attari purchased a gas station at 4460 Tallevast Road, Sarasota, from ABC 1 LLC for $2 million. The partners mortgaged the property to Landmark Bank of Florida for $1.42 million.

i Bradenton-based Bruce Williams Homes has formed its own residential mortgage company.

Peter D. Mason, vice president of sales and marketing at Bruce Williams Homes said the homebuilder entered into a joint venture relationship with First Continental Mortgage Co. of Houston. The joint venture, Great Home Funding LLC, will offer mortgage financing to about 200 homebuyers over the next 12 months for an average of about $200,000. 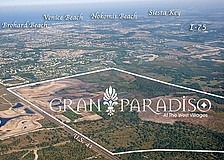