After a slower start than some of its peers, LandMark Bank's directors learned a community banking lesson - the importance of a locally known CEO.

One of the two banana-yellow PT Cruisers was in the automobile repair shop. That's about the only thing bad that was happening at LandMark Bank of Florida on a recent Friday.

Two consecutive years of profitability have wiped out the losses of the first two years and given LandMark a modest overall operating profit of $130,000 for its brief history. LandMark, with $129 million in assets, is the first of the four community banks that opened in Sarasota in 1999 or 2000 to have recouped all of the initial organizing costs and deficits incurred before 2002, , according to Quale and Suplee. It also was the only bank that opened in Sarasota or Manatee counties in 1999 or 2000 that was able to report cumulative earnings by last Sept. 30. (See GCBR, "We're Having Fun," Jan. 2-8, 2004.)

Among the Sarasota quartet of young banks, LandMark was second to The Bank of Commerce in average annual deposit growth, according to Danielson Associates Inc., a bank consultant that has an office in Fort Myers. Only The Bank of Commerce, with net income of approximately $694,000 in 2003, was more profitable than LandMark among local peers of similar vintage. LandMark reported net income of approximately $528,000 for the year, more than double 2002's profit.

From a single shopping plaza location at Bee Ridge and McIntosh roads, LandMark will grow to four offices by this fall. "We're beginning to find that, with that branch coverage throughout the Sarasota market, our retail, our consumer business is beginning to increase significantly," says Quale. "As we mature, we're becoming much more of a retail bank, which falls into play with our branches."

Quale says the bank focused on commercial lending in the beginning but won't turn away retail banking business. "The consumer portion is just naturally growing," he says.

LandMark has attempted to stand out from the area's pack of young, independent banks by using inexpensive promotional vehicles - literally. For about $17,000, including the fresh coat of metallic paint, LandMark put its first PT Cruiser on the road shortly after Quale took over as the presidency in 2002.

"We were not a household name at that point in time," says Quale. "That's how the PT Cruisers got started."

As if to copy Coast Bank of Florida in Bradenton, the first to use branded PT Cruisers in the market, LandMark also put a pair of the stylish retro-hatchbacks - painted yellow and blue - on the road for courier pickups. The colors have become the official signature of LandMark. Even the bank's downtown office on South Washington Boulevard carries the theme. Quale says the branding has worked in raising the market's awareness of the bank.

Meantime, inside the bank, LandMark has been fine-tuning its operating costs. It spends about 75 cents for every $1 of revenue it brings in, which bankers call a 75% efficiency ratio. That compares to the Bank of Commerce's efficiency ratio of 66% and 75% and 83%, respectively, for two other Sarasota newcomers, People's Community Bank of the West Coast and SunCoast Bank.

Quale is steeped in community banking. An engineering major at the University of Wisconsin, he switched to economics as he earned tuition money working at a bank in Baraboo, Wis., Quale's hometown, 45 minutes north of the Madison campus. It was invaluable experience, Quale says. "I knew everybody in town, and you just began to expand on the relationships," he says. "Your reputation in the community is paramount."

In 1987, Quale visited Sarasota and decided he had enough of Wisconsin's snow and cold. "It was the right size town," he says. "It was not too large, not too small. It had a whole bunch of amenities that were real attractive." He moved here a year later and hooked up with Alabama-based SouthTrust Bank.

Quale worked in commercial lending and branch management for 11 years at SouthTrust. But he says he yearned to get back into community banking. "What I really enjoy doing is the customer relations aspect of it," he says. "Being able to look the person in the eye and tell them what the end result was going to be. Tell them what we can do and what we can't do."

Quale signed on with the organizers of LandMark, whom he had met while working at SouthTrust. He helped recruit a well-connected board of directors, headed by Suplee, a longtime Sarasota CPA, and including notables such as real estate developer Thomas G. Dabney II, currently chairman of the Southwest Florida Water Management District; Robert W. Brown, managing partner of Sarasota-based Atlas Insurance Agency; Kathleen M. Toale, manager of the Sarasota funeral home company, Toale Brothers, Inc.; John M. Steele, a Sarasota physician; and Annette Ayers, an associate at Michael Saunders & Co. The original board is still intact, with three additions in the intervening four years.

The first LandMark chief executive officer was Lee K. Waring III, a former Barnett banker with more than 20 years in the business. But Waring had worked his entire career on the Atlantic Coast of Florida.

"Lee was a great guy, instrumental in organizing the bank and played a very valuable role for us," Quale says today, but "Lee was not from the community and didn't really know people in the community."

Waring, now executive vice president and Palm Beach County CEO of Gulfstream Business Bank in Delray Beach, referred all questions about his LandMark tenure to Suplee. "He put us in the deal," says Suplee, who also praised Waring before criticizing the former LandMark CEO. "But he was not from Sarasota and was not well known."

That made it more difficult to generate sales and deposits. At year-end 2001, the second year of LandMark's operations, its deposits stood at $49.3 million. In contrast, after 15 months, People's Community Bank, headed by its home-grown founder, Neil McCurry, had generated $71 million in deposits.

Says Quale: "We simply needed to put a face with what the community knew and the business people in the area could associate with."

The youthful-looking Quale, 40, was that face. After 14 years in Sarasota, Quale had the contacts - an absolute requirement to survive in a competitive market. In turn, profitability at LandMark has coincided with Quale's elevation to CEO.

Along with adding locations to fuel deposit growth, LandMark wants to put more consumer-oriented employees on staff. Mario V. Pezzella, another former Barnett hand who became a vice president for commercial lending last fall, is an example cited by Quale. There also is internal pressure to expand to south county, according to Suplee. Two directors, Ayers and Gerald L. Pennington of Penn Products Inc., both live there.

But LandMark is mostly only expanding product lines for now. The bank has created or acquired home-lending and wealth management arms to enhance the service options for customers.

Is LandMark for sale or a target for acquisition? Quale doesn't see the bank being acquired. "We are not for sale," he says. "We are truly building this bank for the long run."

Preferably, in a yellow PT Cruiser - once it comes back from the mechanic. 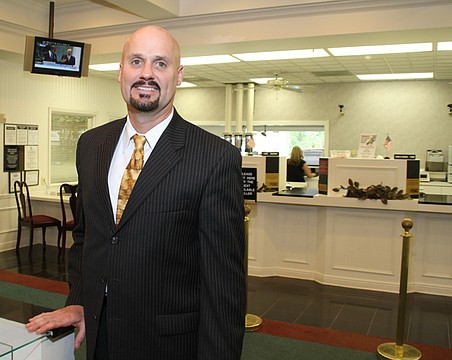 Not so newsy: Bank needs capital 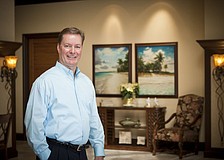