Special to the Review

The woman in the black SUV is in a panic. She just placed her order but the worst possible thing has happened.

"I forgot my money! Oh my gosh! Hold that order!"

How embarrassing. How ¦ lucky for her that the man who took her order, company co-founder Joe Timberlake recognizes her as a regular at the North Howard Avenue store.

"Pay us tomorrow," he says, handing her a steaming cup of java to go.

"I love this place!" she shouts. How does Timberlake know his customers so well? The drive-thru business may be an impersonal one where drivers pull up to a menu board and bark orders at it 50 feet away from the service window. But the fast-coffee drive-thru business - or this one at least - eschews distant ordering systems in favor of face-to-face service. (And keeping the menu to just 20 items makes life simple for all concerned.)

Most mornings, Timberlake can be seen working at the North Howard or Martin Luther King Boulevard locations, walking up to cars, greeting customers, taking orders and making change. If he's not out there, the store manager is. Starbucks may have a bazillion more locations, but that company's CEO, Howard Schultz, probably can't identify his loyal customers by their car.

"You wear a lot of hats in a small chain," Timberlake says. "When I'm on site, I'm taking orders. I know all the customers. Of course, the employees are eager for us to have more stores to get me out of there."

Tim Slamkowski, a 26-year-old advertising salesman, is an Indigo Coffee regular. "I think it's funny they come out to the car before I get to the window," he says.

When Timberlake, 52, and his partner, Jeff Darrey, 55, look down the road, they see Indigo Coffee becoming as ubiquitous as Starbucks. They believe coexistence, rather than head-to-head competition, will be the rule. The Indigo customer, they say, is one who is diverted from 7-Eleven and McDonalds for convenience, and Starbucks for taste.

"We don't really feel we're a direct competitor with Starbucks," Timberlake says. "Starbucks says they're the third place people drink coffee after home and office. We believe the third place is the car."

There are six day parts or opportunities for selling coffee products to commuters, according to the Indigo Coffee business plan. The day starts in the morning with people going to work and taking kids to school, continues through the midday on the way to lunch and the way back to the office, and concludes by picking up the kids after school or heading home from work. "In the morning, people want a caffeine jolt. In the afternoon, they want cooler and sweeter," Timberlake says. The bonus day part comes later in the evening with customers who want a frozen coffee treat after dinner instead of dessert.

The first two Indigo Coffee locations - opened May 25, 2002, and Feb. 7, respectively - swap high-visibility interstate locations for a few security issues. While their signs can be seen from I-275 by thousands of cars daily, the West Tampa neighborhoods aren't the safest. The company benefits from routine police coverage in the morning when stores open at 5 a.m. "We take care of them with free coffee," Timberlake says. In addition, there are video monitors that enable employees to see 360 degrees around the building.

There is another drawback to the interstate locations: a wreck brings business to a standstill.

Next year, the company will expand into communities where security, at least, may be less of an issue. The third store will open in Tampa's Westchase in January. Then it's a location on Gulf-to-Bay Boulevard in Clearwater, followed by sites on North Dale Mabry (a site has been selected and will soon close) and South Dale Mabry (not selected).

"An 'A' location will be in the Carrollwood market, where you have 60,000 cars daily and enough business generators to keep us busy all day long," Timberlake says.

By the end of 2004, six stores will open. Two years later, expansion plans project a total of 30 stores, half in Atlanta, the other half across Hillsborough, Pasco and Pinellas counties.

"We're also looking at Bee Ridge Road and 41 in Sarasota," Timberlake says. "That's a good market down there. The busiest Starbucks east of Texas and south of Atlanta is on Bee Ridge. Second is on 41. It's a good coffee market."

Timberlake and Darrey are looking at sites on Fourth Street in St. Petersburg, as well. "We only need a small sliver of land and there are a lot of creative land deals that would work for us that wouldn't work for other types of business. We can go on a shopping center pad, or we can go in between two properties. We need a minimum of 10,000 square feet. But we need high visibility and a minimum 30,000 car per day traffic counts."

It costs roughly $500,000 to open an Indigo Coffee. The company's plan is to buy land then sell it back in a leaseback arrangement with investors at triple-net, 11-12%, with a 10-year lease with two five-year options, thereby reducing its per-unit nut to $300,000.

Of course, Indigo Coffee is somewhat spoiled by its first two sites. The I-275 stores have 100,000 cars passing by per day. The funky, deep blue buildings are 25 feet high and visible from the highway.

"This is the Jeff side of the partnership," Timberlake says of his partner, Darrey. "Not only the marketing but the creative side with the building's design. Jeff brings the flair and the uniqueness of the building. He found an architect in Racine, Wis., and convinced him to design our prototype, one that was brandable, not unlike McDonalds' arches. Our wing and our distinctive Indigo logo and colors makes us easy to recognize and easy to brand."

Still - more coffee stores? In Florida? With Starbucks opening on every corner, in Albertson's groceries, in airports and just about everywhere else, why more coffee?

"Margins with coffee have always been great," Timberlake says. "Starbucks changed the culture in America and made it OK to spend more than $3 for a cup of coffee. People in today's world don't mind indulging themselves and paying more if the product is good, delivered quick and by smiling people."

The margins in the coffee business are around 25%, according to Timberlake. At a drive-thru, however, the same number of employees that can efficiently serve 200 cars can also serve 600 cars. "We're a double drive-thru, so you can double and triple your time efficiencies with good teamwork," Timberlake says.

Timberlake, who is married and the father of one, and Darrey, who is married and the father of four and grandfather of 10, have been friends for seven years, dating back through Timberlake's days as chief operations officer at then-Clearwater-based Hops Grill and Bar (1995-2001). Darrey's day job is running Marketing Associates USA in Westshore, where he is founder, president and CEO, and his clients have included Pepsi-Cola, Johnson & Johnson, and Frito-Lay.

"We have common core values," Darrey says of Timberlake. "We believe in the same things. We each recognize our individual areas of expertise and respect one another in that regard. Joe is a phenomenal operations person. With his background - 25-plus years in hospitality - he knows how to build teams and franchises."

The pair's first co-venture, with Bob Mullen, was one of conscience, not profit - the Trinity Cafe in Tampa.

Trinity, which opened Oct. 15, 2001, serves 200 homeless guests daily with silverware, tablecloths and flowers on their tables. In two years, it has served 104,000 meals. The nonprofit leases space from the Salvation Army at the corner of North Florida Avenue at Palm. Timberlake left Hops in 2001 amid a downsizing, restructuring and relocation of the parent company out of Clearwater.

"I found myself absorbed in this ministry," Timberlake says. "We were talking about a hospitality venture at one point and I said, 'Jeff, what do you think of double drive-thru coffee?'"

He liked the idea. Darrey, a three-times-a-day Starbucks addict, can tell, for example, if an espresso is too bitter or weak. Darrey was interested in buying a Starbucks franchise in the early 1990s, but his own business kept him too busy to pursue it.

"My background is operations, his is marketing," Timberlake says, "so we thought we'd be a good fit."

Timberlake's severance agreement allowed him the cash and time to pursue the coffee idea that had been brewing for several years. They researched coffee, interviewed consultants and did taste tests with focus groups.

They also learned how to perfect the 19 coffees, teas and Italian soda products that eventually landed on the Indigo Coffee menu.

"The science of making an espresso drink is a craft that's not unlike bartending," Timberlake says.

The business plan envisions a national company rather than being satisfied with two local units. Drive-thru coffee sales looked like a natural. "Nobody had grabbed the concept and was running with it on a grand scale," Timberlake says. "Our concept was to be the biggest drive-thru coffee seller in the industry."

Bob Nichols, president of Brokers Unlimited in Hawthorne, helped source brewed coffee systems and espresso machines for Indigo. And he introduced Timberlake and Darrey to Jack Ovadia, The Beanz Man, in Sarasota.

The company has 18 full-time employees, including enough managers to run its first five stores. Several came from Starbucks, but that's not a background Timberlake necessarily wants to hire in the future.

"We would rather train them from scratch because we believe we do a better job," he says.

Timberlake brings a multitude of skills from Hops. "I've started markets from one restaurant and grown them to multiple restaurants," he says. "I was the partner for Hops in Colorado and built that market to one of the best."

Jerry Kolar, president of Tampa-based Kolar Systems International, is one of the company's first outside investors. He knew Jeff Darrey through a mutual interest in the startup of First Citrus Bank a few years ago.

Indigo Coffee won't release annual sales information. But its break-even goal is for each unit to reach $600,000 in annual sales. Neither store open to date has reached that number yet, but Timberlake says it is in reach, perhaps by year-end.

How hot can this company get? The plan is to stick with company-owned stores for the foreseeable future and eschew franchising for as long as possible.

"In three to four years, we should be ready do to a public offering," Timberlake says. "Or Indigo could be ripe for an acquisition." 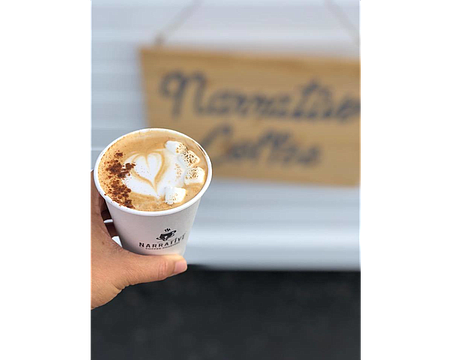 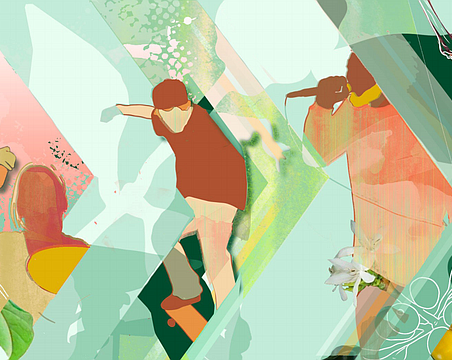 Coffee giant opens community-focused shop — one of only 19 nationwide 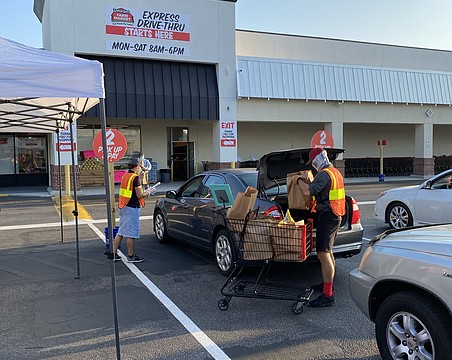 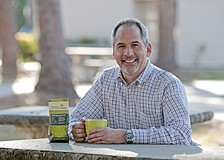 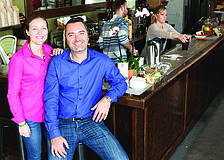 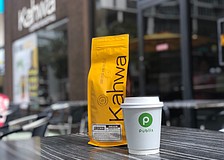 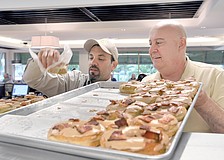 Where the rubber meets the road