Special to the Review

That's what happens when a 46-year-old regional institution known for style, selection and price spreads its wings for the first time: loyal customers and friends show up with credit cards ready to show support.

Grant, for example, spent $275 on many pairs of shoes, including active shoes for herself, dress shoes for her husband and sneakers for her stepdaughter. A customer of the original St. Petersburg store for eight years, Grant - a commercial real estate investor and mother of three boys and two stepdaughters - likes the wide range of shoes styles and sizes found at Peltz.

Peltz Famous Brand Shoes dates back to 1957, when Bernard and Gonna Peltz were a young married couple. He was from Tupelo, Miss.; she was from Cleveland. They met at the University of Alabama, where Bernard told Gonna, "Wherever we move to, in whatever town we move to, 'Peltz' is going to mean shoes."

They settled on Florida and nearly set up shop in Boca Raton, before making a last minute bet on a Central Avenue location in downtown St. Petersburg. Two sons and two daughters were raised in the family business; Mark, the oldest boy, followed his father immediately. Andrea, the oldest daughter, married an international attorney and moved to Miami. Barbie, the youngest daughter, and Gary, the youngest son, went off to college.

"My children grew up thinking they were famous because the name of the store is 'Peltz Famous Brand Shoes," Gonna says, laughing. "It's not a big town, but not a small town, but everywhere they go, everyone knows the Peltz name."

Bernard saw his dream come true; in St. Petersburg - and beyond - the Peltz name became synonymous with shoes. It was the place with the widest selection of sizes and shoes, the most knowledgeable sales help and the best prices.

Then tragedy struck. Bernard died in 1982 at the age of 49 after battling cancer for several years and the family dynamic was forever changed. Mark, then 28, immediately stepped into his father's shoes; he asked Barbie and Gary to come home from college and pitch in. But the fit wasn't a good one for Barbie, who eventually started her own insurance agency and is now a full-time mom. Gary, then 21, liked the business and became a co-owner with Mark, seven years his senior. No one was terribly surprised by the brothers' relative ease in running the business; each started working in the stores when they were 8 or 9 years old.

"We were close in that we got along," Mark says of the point at which he and Gary became partners. "But until that time, being seven years apart, he was my little punk brother. But I wouldn't want anybody else for my partner now."

Over the years, responsibility for different facets of the business "just kind of fell into place," Mark says. "My brother is in charge of all financial matters, computer issues, our Internet site and television advertising. I handle inventory control, newsprint advertising, and most of the buying. We both do buying, but I do most of it. We do it together. I don't want to do what he wants to do, and he doesn't want to do what I want to do."

Seventeen years ago, the brothers made a bold decision to follow population and shopping shifts in St. Petersburg when they left the location their father founded and moved west to a location adjacent to Tyrone Square Mall on 22nd Avenue North.

A year ago, the biggest change yet hit the St. Petersburg store as it went from a full-service salon to a warehouse format. Gone is the emphasis on stylish in-store displays and waiting for a salesperson to fetch the appropriate shoe size from an out of sight stock room. Today, the Peltz store in St. Petersburg is piled floor to ceiling with shoeboxes.

"What really changed is the way the consumer shops," says Gary. "Today's customers want to be served in an environment like this. But we didn't want to be completely self-service. They can wait on themselves or wait and someone will help them. We're giving the consumer everything we think they want."

"When you walk into a department store," Mark asks, "do you want to ask for every shirt you want to try on and wait for the salesperson to bring everything out to you? Of course not. It's the same in shoes. Customers want to be impulsive and try a pair on at their leisure, not ours."

There's a humiliation factor to be avoided, too. Customers can try on a really ugly, but irresistible pair without drawing undue attention.

And there is a practical side, too. The new warehouse format frees up staff for customers who need extra attention. "Before, they had to help everybody," Mark says. "Now, customers don't have to have help. We're in an adaptive society. If you don't change with the wishes of society, you're going to go out of business. The Kodaks of the world that didn't adapt to the tactics of the Fujis of the world weren't competitive and now they're suffering."

The new format is a proven winner in sales but was met with mixed reviews from those closest to the store. Gonna Peltz, for example, didn't like the change.

"My husband wanted a homey, crowded store," the founder's wife says. "The original store had nails in the ceiling and handbags hanging down. He wanted people taken care of. He wanted a more personalized service. I'm from a different generation. I was very proud of the way it was."

Not to suggest a family feud, but Gary thinks his father would approve.

"Dad 's first store was originally like this," he says. "Then we went to a salon type, then salon with racks, and now we're like this. We went full cycle."

"I'm all for the change," she says. "They can point me in the right direction and I can get my business done. I also like the Clearwater store's design because you can see over to the next aisle so you can be multi-tasking."

Mark likens the format change to other necessary business upgrades. "We could have said, 'We're never going to get computers because this is the old way of doing business.' Do I adapt and change or do I still keep buying the same old brands because of something my father did 25 or 30 years ago?"

And while Gonna Peltz liked the stores the way they were, her boys can do no real wrong in her eyes. "They do a beautiful, wonderful job," she says. "I worked in the store and helped out when my husband passed. I had no idea how complicated it is."

In many ways, the shoe business is a local one, unlike clothing. Peltz, with its 10,000-square-foot stores and 50,000 pairs of shoes in inventory, competes almost effortlessly with both salon-style national chains found in malls or warehouse-style national chains in freestanding locations.

"We're independent," Gary says. "But we're competing right alongside the big box stores. We're getting the same prices, if not better."

"We have personal relationships with shoe manufacturers because of what we are," Mark says. "We will get deals the national chains can't get because they're too big. There are advantages to the size we are. Because we're not 200 stores, we can adapt to what customers want from us. We suffer no disadvantage because we only have two stores."

Where does Peltz Famous Brand Shoes go from here? Will it eventually take its new format into Tampa, Lakeland, Bradenton and Sarasota?

Maybe. Maybe not. But certainly not in the coming days and weeks.

Clearwater was also tough because every time the Peltz brothers settled on a site along U.S. 19, the Florida Department of Transportation announced plans to build an overpass there.

"The problem was ingress and egress," Mark says. "They're building overpasses everywhere up there. ¦ But at the new Clearwater Mall, there are eight ways to get there. We felt we had to do it."

The Peltz name actually is famous around the Tampa Bay area because several relatives from Bernard Peltz's generation independently owned and operated shoes stores under the Peltz name in Clearwater, Tampa and Lakeland. (Bernard Peltz owned a piece of each of those stores; when he died, his shares were bought out.)

But following multiple deaths and retirements in the family, relatives closed the other stores.

So, will there be more stores following the successful Clearwater opening?

"One at a time," Gary says. "One at a time. It's like when somebody has a baby, everybody asks, 'Are you gonna have another?' And the answer is, 'If things run smoothly.' "

Gary and Mark, incidentally, each are married and have three children. Maybe the answer lies there.

"It's been very successful in Clearwater so far," Mark says. "But at this point, no immediate plans."

That doesn't mean that if you live outside of Pinellas County, you can't do business with Peltz Famous Brand Shoes. Few of its in-store retail customer know this, but for the last three years, the Peltz name has been an increasingly popular online shopping destination for shoe buyers around the world.

"We have 8,000 unique visitors per day online," says Gary, who is responsible for the family's e-business. "I think they initially come for information, which ultimately makes them buy."

Peltzshoes.com attracts 90% of its business from outside of Florida and has five full-time, dedicated employees handling order fulfillment. Gary won't disclose sales figures for the physical stores or the Web site, but will acknowledge that the Internet contributes a "significant figure. We consider the Internet site a separate store, a separate profit center."

But most in-store customers know nothing of the site. There is no sign of the peltzshoes.com URL anywhere - intentionally.

"We're not promoting it in the stores," Gary says. "In the stores, I want to sell them right then. Not when they get home and have a chance to look at other people's Web sites." 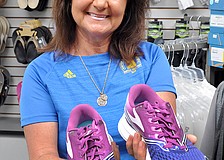 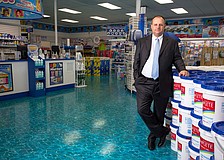 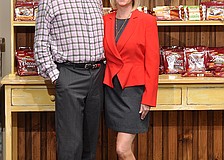