All in the Family

All in the Family

Sarasota's Atlas Insurance has been in business for 50 years, with a 287% increase in sales in the last 30 years. The company's secret: Focus on what they do best.

Lee Brown started Atlas Insurance in 1953 because his wife told him he was spending too much time playing cards at the old Elbow Room bar on St. Armand's Circle.

Brown, then in his 40s, had sold his wholesale liquor business in Louisville, Ky. only a couple of years earlier and moved to Lido Beach to retire. Brown and his wife, Mary Lawrence Brown, were enjoying the golden Sarasota days of the Lido Beach Casino and the Ringling Towers. Brown was making money buying and flipping real estate.

Mrs. Brown had won the Lido Beach Casino Tarpon Tournament - against male fishermen - in 1948 by catching a 140.5-pound tarpon. She won a car. When one local Louisville newspaper asked her if it was the biggest fish she'd ever caught, she replied: "No, Lee was about 165."

But fishing and real estate investing were not enough. Brown knew the Ludwig family, a third generation insurance agency family in Sarasota, and he liked the idea of owning an insurance agency.

McCulley's job was really to feed leads to the company. They needed someone who actually knew the insurance business and was licensed to sell insurance, so they hired Marion Taylor, a woman who knew the pricing and the companies. Taylor was the company's office manager until about 1972, when she retired.

In that first year, Brown was joined by his son, Robert P. Brown, who had just married after graduating from college in New Jersey. "Dad immersed himself in the real insurance side of the business," says Brown's grandson, Robert W. "Back then, insurance companies really trained the independent agents. They went through underwriter training. Not many do that anymore. Then, my dad started selling also."

Insurance sales in those early days did not involve slick marketing campaigns. Instead, the Browns sold their personal lines of insurance - property, liability, auto, and boat insurance - to the people they saw every day at the bank, at the post office, at lunch. "It was the coffee shop crowds," says the youngest Brown. "They saw the same bunch of guys at the coffee shops every morning, at the post office every day. They built relationships that way. This past year was big for us because we finally closed our post office box and we moved out of downtown."

Brown's grandchildren and other family members worked at Atlas during their summers, taking pictures of properties, typing policies, anything that needed to get done. For Robert W., the youngest of Robert P.'s four children, it stuck. After graduating from the University of Florida in 1986, he joined Atlas and has run its operations for about a decade.

"I liked the idea of controlling my own destiny," says the grandson Brown, now 39. "I saw what my dad was able to do for us while having plenty of time to spend with family. I didn't realize how special that was when I was younger, but now I do. Plus, I always loved this town; I love to fish, boat and hunt. Once someone asked me why I would stay here, when I could travel the world. I told him that Sarasota has everything I want. I mean, it was Dec. 26 and we were standing on the beach in shorts playing bocce!"

But Atlas has had its challenges over the last 50 years. Particularly, Hurricane Andrew in 1991 put significant stresses on the industry. "Insurance companies were leaving Florida and none were coming in," says Rob W. "There were very real capacity problems. Companies were dropping condo coverage. Insurance agents did OK because companies were raising premiums, but it was really tough telling people that they really had no choices. One of the reasons people use independent agents is because they think they get more choices, but not then.

"Those same capacity problems came up again after 9/11 - insurance companies became spooked about writing large properties in case of catastrophe. The workers compensation and aviation coverage markets suffered then as well, because the reinsurance market fell out after 9/11."

The industry fallout from Hurricane Andrew made the Browns reevaluate their focus. The company that started primarily with personal lines had naturally transitioned into more commercial lines, reaching a 50-50 balance between the two by 1991. The hurricane, however, spiked homeowner prices, which made the numbers lopsided. The company knew it needed to refocus its marketing efforts on commercial lines.

Instead of appealing to residential Realtors, company salesmen approached more commercial Realtors. They targeted the service industry in particular, increasing its client base of contractors, dental and medical offices, wholesalers and others. The company brought in new employees with commercial lines experience and contacts to build the business.

The results are in the numbers.

In 1971, when the company sold mostly personal lines and had eight employees, it realized gross sales of $695,000, about 25% of which became gross firm profit through premium commissions. By the end of 2003, with commercial lines heavily supporting the company's business, Atlas expects to break $20 million in gross sales. The company now has 30 employees, and its commission percentages are lower - closer to 15% - but the dramatic profit increase is still undeniable.

But the sales increase is not solely the result of a focus on commercial lines. It is also the direct result of a strategic merger in 1994 with Darren Howard, once a competitor from another agency. "To attract insurance companies, you have to have certain mass," says Rob W. Brown. "Insurance companies would rather follow the 80/20 method - have 80% of their business come from 20% of their agents; they don't want a lot of small agents. There are a few ways to generate the numbers you need. Small firms can get larger, sell or merge." Howard is now a trusted vice president of the company, with essentially equal authority and ethical standards as the Browns.

Another major development came in 1997, when Atlas helped create its sister company, Atlas Financial, half-owned by the owners of Atlas Insurance - the Browns and Howard. Atlas Financial sells the complimentary services of life and health insurance, as well as employee benefits packages and financial planning. Atlas Financial's managing partner is Orion Marx, a specialist in those fields who owns the other half of the company. The creation helped fulfill Atlas' goal of being able to offer nearly every insurance product and related service to its clients.

But it can't offer literally everything. The youngest Brown admits that he had a lot to learn when he joined the family company. First, he wanted to try to write everything. "I learned, however, that part of building a solid reputation is knowing that you can't be everything to everyone. If we can't do it well, we pass it along. If something is off the wall and we have no expertise in it, we can't try to learn it right then. Instead, we can facilitate helping the client match up with someone who can help, even though we may not make any money off of it. Clients remember that. It's a lesson I learned over time."

Another lesson the grandson learned from his grandfather, now 94, and his father, now 72, is to have faith in the industry cycles. "We were looking at the corporate minutes from 1970, and back then, insurance companies were re-evaluating their windstorm guidelines. One company was not writing as much wind, and policies had to be moved to a new company. We were also dealing with workers compensation insurance issues back then. These are the same issues we are dealing with today. We used to have problems with lead paint, then asbestos, today it's mold. There's always something threatening to do in the industry, but the cycles also always stabilize."

Though Atlas frequently receives acquisition offers, it's not interested. In fact, part of its marketing strategy is to focus on its longevity and consistency. The company has low turnover among its employees, partly because of the vast investment the company makes in them - Atlas spends more on technology and employee education than its peer group. The core ownership doesn't change, the service is unaltered, and Browns still run the company.

In the future, Atlas has its eye on one day going to a paperless office, having invested heavily in technology, in part to avoid unnecessary increases in staffing. They predict steady 15% annual growth in business in the coming years because of their continued effort to focus each salesperson's target accounts and industries. They are also bringing in additional salespeople who will expand into new markets and lines.

Whether Atlas Insurance will continue to be a family business is unknown. Howard's and Brown's children are too young to show a real interest. "If our kids want it, it will be available to them," says the founder's grandson. "If not, that's OK too."

The Browns' place in Sarasota history

aAtlas Insurance founder Lee Brown and his family have been involved with much of Sarasota's history. Here are a few of the highlights:

Lee Brown sat on the board of directors of Sarasota Bank and Trust, which later became Ellis Bank, then NCNB, then NationsBank and now Bank of America.

Brown's son, Robert P. Brown, was a founding director of West Coast Bank and served as a director of its successor, West Coast Guaranty Bank from 1998 to 2001. That bank is now part of the FNB bank family.

Atlas co-founder John McCulley, a Realtor, sold the Oyster Bay lots for Sidney Newman. Brown bought a couple of them, and the Brown family was partially raised on those lots.

John D. MacDonald, late author of the Travis McGee series, was a client and friend of the family. As a result of their relationship, family members, their stories, and verbatim conversations they had with MacDonald often showed up in his novels. Robert P. Brown's daughter, Beth, a veterinarian, appears in one novel as a green-eyed, blonde vet student. Her father is "Old Rob Brown from the hills of Kentucky." MacDonald dedicated the novel Condominium to Lee Brown's wife, Mary Lawrence Brown. 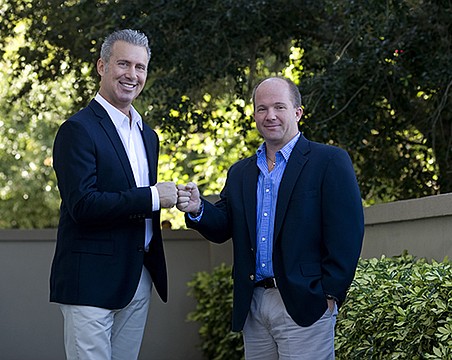 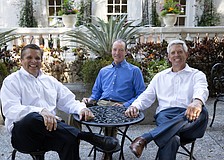 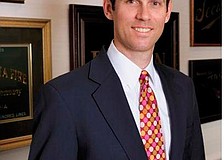 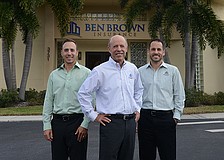