TAMPA — The Brookings Institution recently chose the Tampa Bay region as one of seven cities included in its first cohort for the Brookings Metropolitan Export Exchange.
The exchange will help create and execute strategies to increase the region's exports, a news release explains.

According to 2011 data from the U.S. Department of Commerce, Tampa Bay was the 32nd-largest merchandise export region in the nation, with $9.6 billion in exports, and it's growing. The region's 2011 exports show an increase of 18.4% over 2010.

“While Tampa Bay makes up 25% of the state's economy, we represent only 15.6% of Florida's merchandise exports. That gap provides a real opportunity for growth for our region,” John Schueler, executive director of corporate/economic development at the University of South Florida and chairman of the Tampa Bay Partnership's regional business plan efforts, says in a release.

Brookings' exchange comes from its 2011 export initiative, which engaged regional civic, business and political leaders to create an export plan for their regions. The Metropolitan Export Exchange is a six- to 12-month program that will use help regions design and implement customized plans to increase exports in their areas.

So many products, so few destinations abroad

Exporting ranks low but can improve 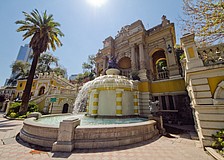 Trading places: All aboard for Chile