Enterprise Florida awarded $850,000 total in grants to 11 communities with military installations. According to a release, the state awards the grants based on a community's plan to fulfill the needs of its military installation or help diversify its economy away from being dependent on defense spending.

“Florida continues to be the best place in the nation for military service members and their families to live and work,” Gov. Rick Scott says in a news release.  “The Defense Reinvestment Grant helps maintain vital missions at Florida's military installations while fostering a cooperative relationship between the military and the community.”

Politician on a mission 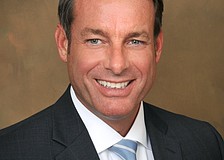