Palmer Ranch is in the middle of a condo conversion rush. Three of Palmer Ranch's five apartment buildings are being turned into condos.

Outside observers say the trend points toward the 320-unit Citation Club, located right next to the Camden, as the next complex ripe for conversion. That would leave the 249-unit Mayfair on Palmer Ranch as the sole apartment complex in Palmer Ranch.

Obviously the change from rental to condominium units is not merely an ownership change. Units in The Savoy on Palmer Ranch, which was renamed the Serenade on Palmer Ranch, were sold for between $184,000 to $268,000.

"We obviously think this will cause an uptick in demand for (future) apartment developments," says Mark Royall, vice president of Palmer Ranch Holdings. "Our market condition is really unique. Our predominant buyers are retirees. Our median age is in the over 60-crowd."

It took the loss of an employee who was being groomed for the chief operating officer job to convince Lee Wetherington he needed to diversify his company's top operational position.

It also didn't help that the Lee Wetherington Cos. Inc.'s had been growing like gangbusters the past four years: revenue shot from $30 million in 2000 to $171 million for 2004.

On Feb. 23, Wetherington, who was recognized as GCBR's 2003 Entrepreneur of the Year, stepped down as CEO to work exclusively as president and chief creative officer.

"This frees me up to work on the models and the interior design which I enjoy," Wetherington says. "I will also work as chief community officer, working on the civic side of the company, such as with the YMCA."

Former COO Bill Hager was named CEO. He will focus on the companies more long-range goals, such as land acquisition.

Wetherington says he's just giving more responsibility to the people who deserve it.

Two-thirds of small businesses provide health insurance benefits for their employees, according to a new study from the International Profit Associates Small Business Research Board.

Beyond general economic factors, health care costs were cited by small businesses as the single most important issue this year - 18% saying this would have the greatest impact on their businesses in 2005.

Employer health care costs have increased an average of 15% each year over the last five years, according to surveys by The Kaiser Family Institute and The National Association of Health Underwriters. Despite concern about escalating health care costs, 88% of those in the IPA SBRB poll said they would maintain or increase the amount they are contributing to their employees' health care insurance costs.

Banks have had happier depositors and borrowers during the past two years, according to the University of Michigan's latest quarterly American Customer Satisfaction Index.

The American banking industry had the same score as last year, 75. But that was the highest score that the industry has attained since 1994.

In the battle of Charlotte, N.C.-based banking giants, Wachovia Corp. got the best of Bank of America Corp. in the latest Michigan survey. Wachovia's score went up 2.6% from last year while B of A's dropped by almost the same percentage.

Throughout the entire U.S. retail sector, Fornell says there has been a stark drop in consumer satisfaction. That doesn't bode well for a country with an economy that has been propped up by consumer spending in recent years.

The way Irish American Properties is acquiring property for the Fruitville Road roundabout it would seem that it was a done deal. But the project has a number of hurdles to pass. According to Sam Freija, manager of traffic engineering, Sarasota will study the traffic and congestion patterns and consider possible roundabouts at Gulfstream Avenue and Fruitville.

"We just don't know yet how a roundabout at one location will affect the possible need for another," Freija says. "Our (traffic) study will address that and will look at several other alternatives. There are still a lot of unknowns."

The city is looking at possible funding for U.S. 41 roadway improvements from the Metropolitan Planning Organization's congestion management assistance fund, clean-air funds, roadway beautification funds and other federal and state sources, he says.

Irish American's Roundabout Properties LLC paid $4.9 million for the Quayside Inn on the southeastern corner of Fruitville and U.S. 41 and the 8,000-square-foot retail building to the northeast.

The sole remaining corner of the roundabout not deeded to Irish American is the Splash Sun & Fun at 231 N. Tamiami Trail.

Research shows a roundabout can increase road capacity by 50% compared to a typical signalized intersection, Freija.

Coffee Talk thinks Sarasota officials might want to talk to Clearwater first, though. The Clearwater Beach roundabout has caused so many accidents it's the subject of jokes. Apparently all roundabouts aren't created equal.

Health Care Costs: Up, Up and Away 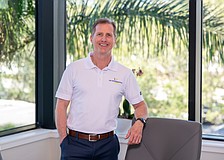 Marketplace of Ideas: Two myths about ObamaCare and small business