CallMiner develops and markets software for call center usage. The technology uses speech recognition technology to listen to every call center or customer service center telephone conversation. It then creates a searchable database of the discussions. Users can mine those databases to detect trends, find out what customers want, determine the effectiveness of marketing campaigns, monitor call center agent performance, etc.

More significantly, CallMiner is about to close an OEM (original equipment manufacturer) relationship with a business partner, under which the partner would sell CallMiner's software as its own, co-branding the product with CallMiner. The undisclosed partner with whom CallMiner is negotiating would give CallMiner products immediate access to the partner's 1,200 existing customers, 60 salespeople, and new European subsidiary, opening up a huge pipeline of future business for CallMiner. That deal is expected to close this month and be effective by the beginning of 2004.

In the first half of 2004, CallMiner expects to complete six to eight deals that are currently in negotiations - two may even close this month. To the extent that an average price tag could be placed on each deal, Doc Simmons, CallMiner's vice president of business development, says the average price of each deal might be about $250,000. For 2004, Simmons says the company projects revenues of between $3 million and $6 million. By 2005, Simmons expects revenues to jump to between $10 million and $18 million.

The company has already raised its angel financing and will seek its first round of institutional financing in February; they are looking for $2 million to $5 million in first round financing. To that end, CallMiner has been accepted into the Florida Venture Forum program, one of only 20 companies accepted into that program this year. The Florida Venture Forum pairs accepted companies with an actual venture capital financier to help them through the process of raising first-round financing.

After eight years of research and development, The Gemesis Corp. is finally gearing up for major commercial operations. Retired Brig. Gen. Carter Clarke started the Sarasota company in 1995 with the goal of producing commercial gem-quality cultured diamonds. It is the only U.S. company producing the diamonds for retail sale.

Gemesis Corp. uses machines to replicate the conditions under which diamonds are created in nature. The machines apply about 850,000 pounds of pressure per square inch and extreme heat to a tiny synthetic or real diamond, graphite and a metal catalyst over the period of four to five days. The process grows a yellow diamond up to three and half-carats in size, which is then cut and polished for sale. These gems typically retail for 75% less than mined colored diamonds.

"This has been a great year," says Carlos Valeiras, CEO and president. "We have made some significant advances. There are a lot of adjustments you have to make." At last count, the company had discovered at least 500 different variables that must be taken into account when creating a single diamond.

Through trial and error, the company has been able to not only increase the cutable diamond yield, but also the clarity. "We used to have about 25% that would not be cutable," says Valeiras. "Now that number is about 5%. And the percentage (of our gems) that are over one carat has gone up three times."

The company is finally taking major steps to put the yellow diamonds in independent jewelry stores. To date, the stones are sold in five retail locations: (Shrode Jewelers) Sarasota; Scottsdale, Ariz.; Detroit; Toledo, Ohio; and Cleveland. The company plans to have eight to 10 stores by Valentine's Day. The company is projected to be profitable in 2004. More than $10 million has been invested in the development of the Gemesis machines and the diamond producing process.

Meanwhile, Gemesis has not abandoned its R&D roots. Its staff is currently working to create blue, pink and red colored diamonds. Development of a blue gem is the farthest along and could be ready for distribution as early as next year. In addition, the company is also researching ways to produce larger yellow-colored gems.

One of the company's more intriguing side applications for Gemesis' technology is for use in conjunction with Chemical Vapor Deposition (CVD) for computer semiconductors. Diamond wafers would be able to handle very intense heat, conditions that would melt conventional silicon chips. This technology is years if not decades away, but its promise has helped hype Gemesis and its competitors, leading to national attention from national media, such as MSNBC, CNN and Wired Magazine.

The impressive advent of wireless (WiFi) systems brought along a tremendous security headache for the heads of corporate IT departments. Once a user taps into a system through a wireless device, the entire network becomes exposed, broadcast everywhere. With an exposed system, it is just too easy for an unauthorized person to tap into it without detection and lift data. Highwall Technologies has the antidote to that security headache.

Highwall Technologies created a firewall for wireless (WiFi) systems. The technology detects and locates all wireless network users, whether authorized and unauthorized, thus enabling management and security of the network. Highwall's products find the holes and the hackers and provide the information a systems manager needs to ensure a secure systems environment and prevent unauthorized access.

It captures key information on every device that connects, receives or transmits wireless data in the covered area. The Highwall Scout is an advanced multi-sector antenna that provides "the only true wireless device location capability in the market today." The products cost $3,000 each.

Highwall Technologies already has its system up and running in several large companies including New York's Computer Associates, Texas-based EDS (Electronic Data Services), and Illinois-based Union Health Service Inc. The company expects to close a deal with Sarasota Memorial Hospital soon as well. By the end of 2004, Highwall Technologies predicts it will have about 200 customers, with revenues of $5 million.

Highwall Technologies purchased the technology, created by local inventors, about a year ago. They applied for about nine patents on the technology - still pending - and officially formed the company in June 2003. Highwall has some competition in the WiFi firewall field, but it's not strong competition. Highwall's products have a 20:1 advantage over the competition in range, and only Highwall offers Location, the ability to specifically locate a single WiFi device. For example, if an unauthorized user is accessing a wireless network, Highwall's products can identify the precise location of the offending device used to gain access.

Highwall Technologies was the first company to receive investment from the Startup Florida Dinner Club Investment Fund - it received $275,000 from Startup Florida. The company has raised about $500,000, mostly used for research and development and initial product manufacturing and marketing.

Startup Florida's Rich Swier and retail industry technology expert Ken Goldberg are the key principals of Highwall Technologies. Only half in jest, the two say they are open to any offers to acquire their company. "The bidding starts at $20 million," says Goldberg, with a grin.

In 2001, Shepherd released the "Market Intelligence On-Line Suite," which helps eliminate long lead times and the high cost of becoming productive. It provides market intelligence to all levels of airline management, with expanded systems available for each higher level of airline executive. Airlines can use the technology to evaluate and respond to emerging opportunities, trends, or problems and make resulting market projections.

For example, one of the company's most widely-used MIDT system is MarketMaster, which helps with competitive analysis and sales planning. MarketMaster enables an airline to compare their booking performance with a competitor or ally. It can also detect booking trends, the source of traffic flowing to and from the airline's network, the strength of the airline's network, and potential sources for revenue opportunities. It allows global analysis of existing routes and new route options based on the airline's historical market share performance and their competitors' performance by class of service mixes. Airlines of all sizes can evaluate the size and potential for certain markets and match or compete with existing competitor schedules in that market. Current users of MarketMaster include South African Airways, Flybe (based in Exeter, UK), Air Zimbabwe, bmi (formerly British Midland, London), Qatar Airways and Scandinavian Airlines.

For regional or smaller airline carriers, who have more limited market information requirements than major carriers, Shepherd Systems has recently announced the launch of ClarityTM, a smaller-scale version of the MIDT system. The program tracks market performance for an airline and its competitors, and enables the carrier to monitor trends and projections for planning purposes. Carriers using Clarity include Oman Air, Aloha Airlines, SN Brussels Airlines and Midwest Airlines.

The company has a separate program called the Booking Information System, which provides travel-booking data from a variety of sources, including a database of 130,000 travel agencies. Airlines like Lufthansa use the sales intelligence data to target specific markets, increase sales volumes, eliminate paperwork and provide portable data access during sales calls.

All Shepherd solutions are available on-line or through the Internet, eliminating customer need for either specialized hardware implementation and maintenance or acquisition of software licenses.

In 1998, this company was purchased by and became a wholly owned subsidiary of Galileo International, which was in turn purchased by giant conglomerate Cendant Corporation in September 2001. Despite these purchases, Shepherd still operates fairly autonomously in Bradenton.

These engineering innovators have been creating a variety of unique products for more than 15 years, combining their experience and knowledge of electronic, software, mechanical and chemical engineering. For example, Viking developed the ultra-low power microelectronics for "exploding money packs," the most widely used bank security system worldwide. The company designed one of the first piezoelectric valves and associated controls more than ten years ago; the valve is still used by some major military organizations.

The company's most recent proprietary innovation is ViVa, which the company Web site describes as "Viking's proprietary solid state actuator, the future of electrical valve actuation." ViVa is an electromagnetic engineering innovation providing a new, energy-efficient alternative to the old technology of magnetic solenoids. Solenoids, introduced about 100 years ago, are still the current on-off device for electromechanical motion - motion-powered by electricity. Solenoids are coils of wire wrapped around a core that forms a magnet when electricity is applied. Solenoids are the basis for electrical relays that control refrigerators, air conditioning, photocopiers, many automobile functions, etc. It would be normal to see many thousands of solenoid-operated devices in a modern factory, but they are power hungry.

ViVa serves all the function of a solenoid, but better, faster and by using a lot less power. ViVa's power consumption is as low as 1% of comparable solenoids. Unlike existing comparable technology, which can heat up to 100 degrees or more, ViVa emits virtually no heat, which is very important for many new high-tech products, such as miniaturized devices and heat sensitive materials like medical and scientific instruments. ViVa can operate in less than one millisecond, up to ten times faster than existing solenoids. It also provides proportional operation along with standard on-off operation, giving the controls up to 20 times more range.

ViVa is first being targeted for fluid control, like control of the valves that control water flow in dishwashers and washing machines, but its potential applications are much broader. In recent tests, one customer replaced the solenoids of their existing valve products with ViVa and they obtained a 270% better performance and reduced power consumption by 95%.

The enthusiasm of company employees is palpable. The company has applied for about 20 patents for ViVa, though none has yet been issued. Company representatives say they expect ViVa to be to solenoids and the electromechanical motion industry what solid state electronics were to vacuum tubes - it will replace the old technology and make it obsolete. They say that instead of having to "create the market," as is the case with many new technologies, the market already exists, in that they only have to begin replacing exising solenoids.

So Real, It's Scary 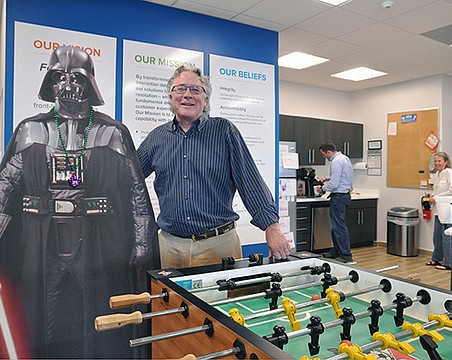 Listen to your customers