Key takeaway: First National Bank of Pasco, a small community bank with just five branches and a focus on commercial banking, has taken steps toward making the leap into the world of fintech.

Core challenge: The bank’s deal with Aiden Florida Bancshares Inc. was supposed to have closed already, but the sputtering global economy and rising interest rates have slowed it down.

What’s next: Jim Esry, a newly hired executive, has been tasked with evaluating fintech products and services that can fuel the bank’s future growth. He says the Aiden merger should be finalized by the end of the year.

First National Bank of Pasco, a Dade City-based community bank with $276 million in assets that specializes in commercial loans and financial services, has been around since 1986. Thirty-six years might not seem that long at first glance, but when one considers the rapid pace of consolidation in Florida’s hyper-competitive banking industry, that’s quite a feat of longevity.

However, FNB of Pasco’s resistance to merger and acquisition opportunities finally ended earlier this year when its parent holding company, Florida Bancshares, agreed to sell a majority of its outstanding stock, somewhere between 65% and 85%, to Aiden Florida Bancshares Inc., a company based in Rancho Santa Margarita, California, about 50 miles southeast of Los Angeles. Tech entrepreneur Fadi Cheikha, who also owns US Alliance Group, a fintech company that specializes in payment processing services, owns Aiden.

The deal hasn’t closed yet but Jim Esry, who joined FNB of Pasco in July as chief enterprise risk officer, a newly created role, says it should be finalized by the end of the year.

“The initial goal was to get it done maybe by mid-year but then things in the global economy slowed it down a little bit,” he says. “Everything takes much longer now that the Fed has raised rates so much in the last six to eight weeks. It just complicates things.”

The prospect of joining a well-established, stalwart community bank at the outset of its embrace of fintech was enough to lure Esry from Lafayette State Bank in Mayo, where he served as president and CEO of the bank in rural Lafayette County, between Gainesville and Tallahassee. He’s known Cheikha for several years and was excited to join the team.

“Globally, the process of moving money from one place to another has evolved significantly over the last few years,” Esry says. “And traditionally, community banks have kind of stayed out of that because it’s complicated; it’s technical. I’m excited that we’re going to kind of get into that space, because it gives us opportunity to differentiate ourselves.”

But what’s the incentive for a small community bank with five branches to join the fintech party? And why now?

The answer, Esry says, is less complicated than you might think. Community banks are being acquired with increasing frequency — some have even been bought by credit unions, a trend Esry bluntly characterizes as “terrible” — and FNB of Pasco shareholders wanted to strike a deal that would allow the bank to proactively control its destiny.

“Our shareholders were concerned about maintaining [our status as] a local community bank,” he says. “When bigger banks come in and buy smaller banks, they start closing branches and they start moving services. But smaller communities require more expertise and are typically not profitable from a big-bank model. The deal with Aidan is structured in a way that the core of First National Bank Pasco is going to stay First National Bank of Pasco — we’re not going away; we’re not being absorbed into another bank or anything like that. That was appealing to our board and our shareholders.”

He adds, “for a traditional local bank, our board members and our directors are very forward thinking.”

Esry will be vital to FNB of Pasco’s path forward. As chief enterprise risk officer, he’s charged with evaluating fintech products and services the bank could offer in the future.

“I get to look at some of these innovative ventures,” he says, “and dissect where the risks are to the bank and then come up with strategies to mitigate those risks.”

FNB of Pasco President and CEO Steven Hickman, in a July statement, says Esry “brings exactly the expertise we need in this moment” and that the bank will “benefit from tremendous fee income opportunities generated from fintech businesses. The timing is excellent.”

At the macro level, Esry sees his role in simpler terms.

Another area community bank is sold 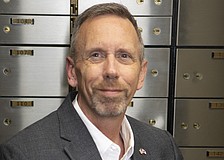 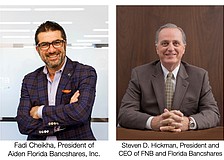 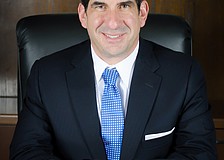