After years of looking at a piece of property, Wolfson Development is finally constructing a new build-to-rent community in Fort Myers.

Key takeaway: The Wolfson Development Co. will build 300 build-to-rent units in Fort Myers, along with a commercial center and apartments, on 70 acres across from The Forum.

Core challenge: As the economy tightens and buying a home gets tougher, build-to-rent communities are becoming more popular because you get the benefits of suburban living without the obstacles to buying. But will there be enough renters to meet the growing inventory?

What’s next: Wolfson hopes to break ground on the housing and commercial portions of the plan within the next year.

Anyone who’s read the news in the past couple years knows that buying a house, unless you have piles of cash lying around, is harder than ever.

Interest rates are climbing, inventory is thin, and prices are at record highs. And although there is some hope for relief on the supply side, affordability remains one of the biggest barriers to buying a home.

One way a growing number of potential homebuyers are bypassing the obstacles in is turning to build-to-rent communities that offer the benefits of home ownership and neighborhood living without the financial burden required to buy.

And soon, residents in Fort Myers will have one more option if they are in the market for a build-to-rent community.

A Miami-based build-to-rent developer has bought a 70-acre parcel of property on State Road 82, just off Interstate 75, across from the master-planned community The Forum, according to Fort Myers-based LSI Cos. which brokered the $30 million sale.

Adam Wolfson, CEO of the real estate investment company, says the commercial portion of the project will be complimentary to residential use, meaning there won’t be gas stations or self-storage facilities.

Wolfson says his company currently has about 1,800 build-to-rent units under construction in Florida. That includes Encanto Isla, which has 214 units on two properties totaling 25 acres in Buena Ventura Lakes, outside Orlando. It is also behind Cantabria Bradenton, a development on 36 acres in Manatee County with 172 attached town homes and 12 detached single-family homes.

Cantabria, in fact, played a big role in the Fort Myers project.

Fort Myers is the midway point between Miami and Bradenton. Wolfson would stop at a Starbucks in the Forum when traveling to see Cantabria and would drive along the north end on State Road 82.

“I kept looking at it going, ‘man, that is a perfect site. I love this area. I love the Forum,’” he says.

“I think what they’re doing there, that big mixed-use project, gives people access to retail, restaurants, it gives them something, that sort of typical downtown experience and really provides a sense of place.”

Wolfson felt the land, which he eyed for five years and actively pursued for two years, had the right scale for a build-to-rent community. So he reached out to Justin Thibaut, president and CEO of LSI.

“I kept calling him saying, ‘can we get a chance at this?’ And we kept making offers, but, you know, Amazon was behind it,” he says.

When Amazon backed out earlier this year, the owners told Wolfson that “we’ll give you a chance at it. But you’re going to have to move as big or as fast and as diligently as some of the larger institutional folks that have interest in the site.”

“We were up for the challenge and we got it done.”

Wolfson hopes the project will be built quickly. He says the property came with a development order in place that’s favorable and that the city will be accommodating as long the project doesn’t stray beyond the zoning.

“We don’t want to change anything, we want to go straight forward with it,” Wolfson says.

“Ideally, we can get out of the ground within 12 months. We’ll probably start with the commercial and the build-for-rent at the same time. And then perhaps the multifamily shortly thereafter. But the primary goal is built-for-rent.”

Wolfson is only one of the developers in the build-to-rent business near The Forum.

In June, Halstatt Real Estate Partners and Soltura Development Group, the developers behind the Odyssey by Soltura, said they were moving forward with a second phase of the build-to-rent community and were building an additional 160 homes.

The development will be about a half-mile west of the first phase in The Forum. It is to be called Altair by Soltura

The second phase of the project will include the 160 one-, two- and three-bedroom single-family rental homes with private backyards and outdoor patio space adding 533 square feet of space to each unit. The community itself, which will sit on about 12 acres, will include a clubhouse, community social and fitness programming, a pool, a fire pit and a dog park. 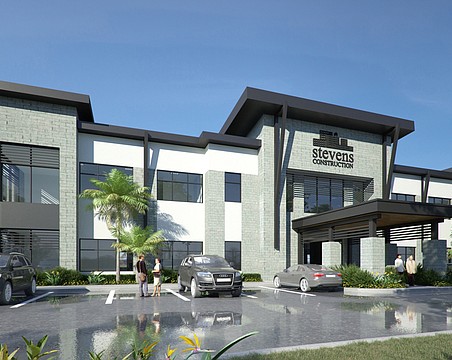 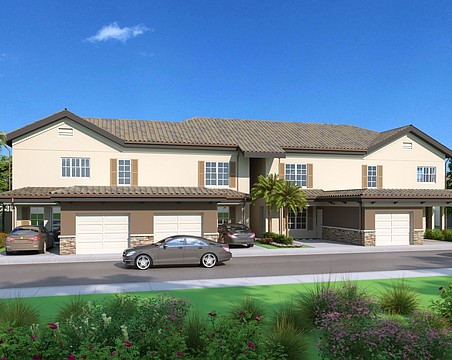 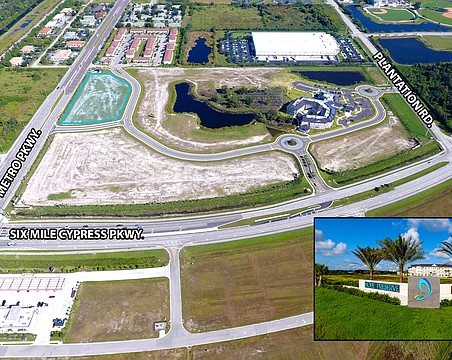 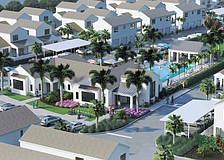 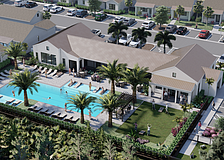 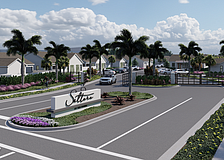 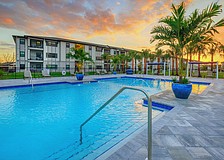 Mosaic at Forum Apartments is listed for sale 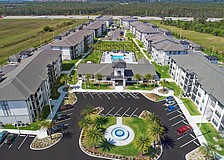