A deluge of obstacles leads a couple to put Mixon Fruit Farms up for sale. "This is so hard. Anyone who knows farmers knows they love their land," Janet Mixon says.

Key takeaway: The owners of Mixon Fruit Farms in Bradenton are considering selling the farm and business, which has been operating for more than 80 years.

Core challenge: A long list of obstacles, from citrus diseases to Hurricane Ian, had made the business ever-more complicated and ever-less profitable.

What's next: The husband-wife team behind the business, Dean and Janet Mixon, will consider offers to buy the land. Most of the potential suitors are interested in building residential communities there.

To keep their Mixon Fruit Farms thriving, Dean and Janet Mixon dipped into unfamiliar territory over the last 16 years. That included hosting weddings, creating a wildlife viewing area, growing bamboo and being a producer of broghies.

It hasn't been enough.

An Oct. 20 press release announced their intentions to consider the many offers they have to buy their property.

"This is so hard," Janet Mixon says, speaking from their farm Oct. 24. "Anyone who knows farmers knows they love their land."

She says her husband never gave much thought to selling the property. But a stream of negative factors affecting agriculture has changed his thinking.

Also, this wouldn't be the first time the Mixons sell the land, or at least some of it. In 2006 they sold 280 acres between 15th and 27th Streets East to the Metro Development Group, which had planned about 1,400 homes there, according to a Business Observer article. The developer sold the property to a New York City real estate investment firm in 2013, citing the real estate market crash as to why the site wasn't developed. The 2006 transaction left the Mixons roughly 40-50 acres for a grove, gift shop, packinghouse and café.

In their release, Dean Mixon says the North American Free Trade Agreement, that came into effect in 1994, created an environment that allowed the citrus diseases now plaguing Florida to enter the U.S. He said COVID-19 created hiring and staffing issues, and Hurricane Ian just "knocked off half the fruit" from the farm's trees.

The Mixons emphasized they have no standing offer on the property and they aren't likely to reach any agreement until they find out what can be built on their land. Janet Mixon believes most of the builders who have made offers are interested in building residential communities.

She also said says anyone who books a wedding with Mixon's Fruit Farms through 2023 should be assured no changes will be made until 2024 at the earliest.

At its height, the Mixon farms, owned by Bill Mixon and his sons, Dean and Don Mixon, included about 350 acres and the market for produce. Janet Mixon says they all had expertise in different areas — Bill was great at researching agricultural concepts; Don oversaw the actual work on the land with the crews; and Dean was a "computer genius" — and that made them an effective force.

The 2006 land deal, however, which stemmed partly from a citrus tristeza virus that hit the Mixon's crops hard in the early 2000s, caused Dean Mixon to do some serious thinking about the farm's future. He and Janet got married in 2003, and they prayed about whether to continue the farm and market. They decided to go forward."I am a big memory maker," Janet Mixon says. "I wanted the farm to go on."

They made Mixon Fruit Farms into a wedding venue to attract new business. They added a children's playground, and had to add astroturf in 2015 because all the kids were playing in the mud. They built a pond to enhance the grounds. In 2008, they added animals and a tram tour.

Their farm now is down to about 40 acres. Besides the oranges and grapefruit, bamboo takes up about 10 acres. It was supposed to be a boost to the farm, with the citrus industry suffering from greening.

In 2021, the Mixons began producing broghies, a disc-shaped, low calorie, fat free bread substitute made by taking corn or wheat pellets and putting them under enormous pressure and heat. The Mixons are considering an expansion of their broghie business, if they do have to sell Mixon Fruit Farms, to help some of their 20-some employees keep jobs.

But they also are facing time.

"We are both in our 70s," Janet Mixon says. "Dean does everything around here, and he loves going out there. Last summer, Dean put in all the irrigation for the bamboo."

"It already was hard getting citrus last year with all the farms going out of business," she says. "And this time, the hurricane knocked out farmers we have been doing business with. The hurricane beat us to death."

On top of the other hardships, Janet Mixon's younger brother, Don Sandhoff, died in a helicopter crash June 22 in West Virginia.

"Nobody wants to lose their business," Janet Mixon said. "Selling a farm is awful when you feel you have done everything possible to make things work." 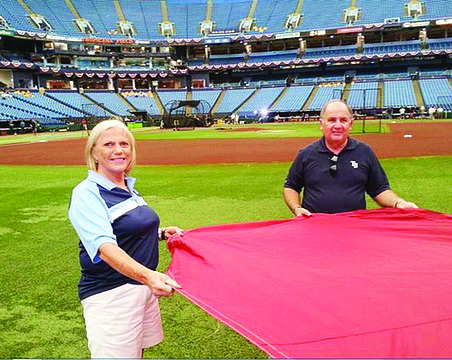 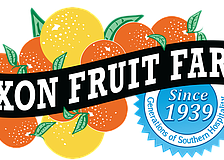 Well-known Bradenton fruit farm may be looking to sell 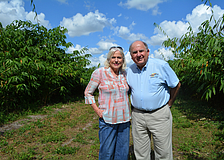