Southwest Florida Chicken Salad Chick franchise owners Kendal Potesta and Scott Pace, with plans to open six locations in the region, bring a variety of experience to the quest. Pace worked for a Wall Street consulting firm, while Potesta owned her own consulting firm, advising clients on operations, HR and financial issues. They have experience in the restaurant and grocery sector.

A Fort Myers couple is popping out new Chicken Salad Chick locations at a rapid rate.

Since opening their first location in Fort Myers three months ago, another location popped up in Estero with yet another one expected to open in Port Charlotte by Jan. 10.

And they are not stopping there. Franchise owners Kendal Potesta and Scott Pace have their sights set on opening another location in 2023 and two more by 2024. So far, they’re looking for sites in Cape Coral and Naples.

One big challenge? Finding locations to meet the growth goals.

“This area is growing so fast,” Pace says. “You've got new businesses in the community (that) want to take really good locations. There’s not as many to choose from that you might have in a larger city. You have to wait for development to catch up.”

There are two key factors that make for the near-perfect Chicken Salad Chick location: it has to be in the main hub or commuting area and the general layout is taken into consideration.

In Fort Myers, the location is right off Colonial Boulevard, a high-traffic commuting area from Cape Coral to Interstate 75. “We touch a lot of people throughout the day,” Potesta says.

Estero is a similar situation, located right off of Interstate 75. “We’re at a great commuting area where people are, at some point, going to be heading that way,” she says.

The layout has to offer perks like a nice patio or space for a drive-through option.

“We know every single day we’re going to execute on great food,” Potesta says. “We want to do the best we can to match that with a beautiful surrounding and restaurant.”

Since opening that first location, in Fort Myers Village Walk, the response has been strong. It was the No. 1 restaurant in sales volume in the entire Chicken Salad Chick system the week it opened, the couple says. Alabama-based Chicken Salad Chick, with more than a dozen Southern-style chicken salad variations, has 220 locations across 17 states.

The Fort Myers location was greeted in the most Florida way: by Hurricane Ian. After shutting down for 10 days, the owners decided to give back to the community. Through a match donation between the customers and owners, the location donated 2,000 meals to frontline workers and first responders helping with recovery efforts.

That community spirit has followed along to the Estero location, off Corkscrew Road just west of Interstate 75. As sort of a test run for employees, the restaurant hosted a benefit for Golisano Children’s Hospital, which has locations across Southwest Florida. The restaurant raised $2,700 for the hospital while workers went through training on real customers. The first day the location was open, they served over 1,000 guests. Just to compare, a typical day brings in about 700.

Finding employees, despite labor shortages, has been the easiest task for these three locations, the couple says.

“We’re able to attract a lot of really good talent,” Pace says, noting that staff enjoy that everything is made by hand with the only equipment being a steamer. “They can make really great food and they don’t go home smelling like grease.”

But tasks like construction delays have been ever-present. The Port Charlotte location, for example, was originally supposed to open three months ago.

And costs keep rising so additional offerings like drive-throughs are harder to come by: each location requires a roughly $1 million investment. “Drive-thru locations are quite a bit more expensive to lease, buildout and employ,” Pace says.

Aside from the economics of it, the drive-through option may not be the best bet for the couple anyway.

“COVID-19 changed the rules when it came to restaurants,” Pace says. “Drive-throughs became really popular because of convenience and less contact with individuals. One thing we’ve seen though is with our brand people love coming into our restaurants. Of course, we want to get a drive-through whenever possible for convenience, but at the same time, many of our busiest locations throughout Chicken Salad Chick are non drive-through locations.” 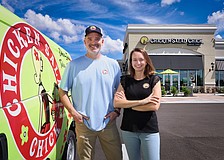 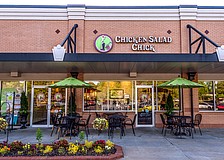 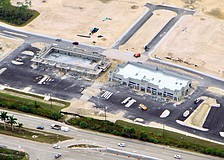 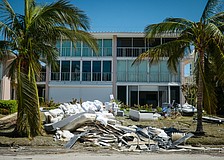