MarineMax strikes lease deal with airport that will create 300 jobs

MarineMax Inc., one of the nation’s leading boat and yacht retailers, has reached an agreement to lease 9.5 acres of St. Pete-Clearwater International Airport property for a project that will create more than 300 jobs and generate millions of dollars of revenue over the 50-year span of the deal.

The Pinellas County County Commission on Tuesday approved the deal, according to a news release. In 2021, the county requested economic development proposals for the land, and Clearwater-based MarineMax (NYSE: HZO) was the sole respondent. Its plan, which was developed in conjunction with local companies Intrepid Powerboats and Wannemacher Jensen Architects, calls for the construction of 132,000-square-foot, state-of-the-art manufacturing building; a 400-vehicle parking garage; a travel lift well for hauling out and launching yachts; and a waterside docking facility.

The project, the release states, is expected to create 280 jobs for trades workers and 20 administrative support staff positions, in addition to 315 temporary construction-related jobs. MarineMax will lease the property at a rate of 60 cents per square foot, or $248,987.40 annually, though rent will be discounted for the first five years of the agreement as the company and its partners develop the site.

“We are very pleased to bring this economic development opportunity forward with one of the few undeveloped parcels of waterfront land in Pinellas County,” St. Pete-Clearwater International Airport Director Tom Jewsbury states in the release. “The MarineMax project is a job creator for both construction and manufacturing, and the 50-year lease provides a new significant source of revenue for the airport. We look forward to the development of this property and the economic returns it brings to Pinellas County.”

The property, located 900 feet east of Bayside Bridge, north of Roosevelt Boulevard and west of the airport’s airfield, was originally developed in the mid-1970s as a restaurant and banquet facility. That business eventually closed and was subleased to The Turtle Club. After that establishment shuttered, the county terminated the lease and demolished the remaining structure.

Boat firm swims in the big-time

MarineMax gets $30M of credit 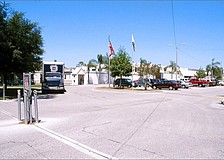