The market for new banks in Florida and nationwide is exceedingly dry. A pair of ambitious bankers hope to make it rain with some new entries.

Kevin Darmody flatly admits it: when he tells someone he’s part of a team opening a bank, “people question if we have all our marbles.”

The doubts stem from a myriad of obstacles. The pandemic, of course, is one, and hiring right now is tougher than ever for any business. Specific to banks, launching one is usually a capital-intensive proposition with multiple regulatory hurdles. More challenges: low interest rates are cutting into bank margins and the rapid increase in digital banking has further commoditized an already fickle industry, making customer retention tougher.

‘We believe a business owner should have two banks and one of those needs to be a local community bank.’ Bill Blevins Gulf Coast Business Bank.

One more obstacle? The level of capital required to launch a bank is up threefold from 15 or even 10 years ago, when a community bank could start out with $5 or $10 million. "Those days are gone," says Gulfside Bank President and CEO Dennis Murphy, who raised $23.5 million over eight weeks when he founded his Sarasota-based bank in 2017. "Today you need closer to $20 million."

For all those reasons, the community bank startup sector is like a desert of late, at least compared to the heydays of the 2000s. More than 1,300 banks, 132 on average each year, were chartered and opened from 2000 to 2009, according to Federal Deposit Insurance data analyzed by Banking Strategist. That replenished the pool of banks lost to mergers and failures at a rate of over 30%, reports the banking industry data and analysis firm. Then the recession flattened banking, and new ones along with it. In turn, from 2010 through the first quarter of 2021, a mere 60 banks have been chartered and opened nationwide. That’s a 3% replenishment rate.

Yet Darmody and his group, Waterfall Capital Investments, behind Clearwater-based Waterfall Bank, might be onto something — and soon counting lots of marbles. Expected to open in October, Waterfall is one of a handful of community banks, in Florida and nationwide, to counter the prevailing narrative of a drought of de novo banks. (In banking lingo, a startup is called a de novo, Latin for anew. A de novo bank is a new charter, not an acquisition, and is under a stricter set of capital and regulatory standards for either its first three or five years.)

Beyond Waterfall, six of 29 de novo bank applications filed with the FDIC since 2020, some 20%, have been from Florida, according to S&P Market Global Intelligence. Two of those, Waterfall and Fort Myers-based Gulf Coast Business Bank, are on Florida’s west coast. A third de novo, St. Petersburg-based Climate First Bank, opened in June. Florida has also had five banking charters approved since 2017, reports Banking Strategist — the most in the country.

One reason for the optimism, says Darmody and other de novo entrepreneurs, is they believe the market, with so few community banking options left due to mergers and consolidations, is ripe for new players. “Interest in the bank has been extraordinary,” says Climate First Bank CEO Ken LaRoe says, citing not only the de novo status but also the bank’s focus on environmental regeneration. “I’ve been getting calls from all over Florida and across the nation from people eager to invest in our mission.”

In addition to investor and client interest, a new report from law firm Troutman Pepper found that de novo banks, for a host of reasons, might be about to have a moment. For one, de novos are cutting down the time it takes to turn a profit, from 8.6 quarters on average to 6.8 quarters. “In combination with the trend toward digital banking transactions,” states the May report, “the reduced investment required for facilities and staff has aided de novo banks, which appear to be in the right place at the right time.”

Murphy points to another positive factor in de novo banks: the ability to help local businesses be better businesses. "I'm a big believer in the community bank model," Murphy says. "These banks really do a great service for the community. We are able to impact clients and help them achieve their dreams without boxes our bureaucracy."

A look at the early days of both Waterfall and Gulf Coast Business Bank shows some similar challenges, with different models and strategies.

Bill Blevins, behind Gulf Coast Business Bank, is doing something he’s never done in nearly 35 years of banking: start a bank. And like the story of Hernan Cortés destroying all his ships upon arriving in the New World in 1519, to show the crew there was no turning back, Blevins says “I’ve burned all the ships — like Cortez. I’m all in.”

And like Darmody at Waterfall, Blevins is often queried about why he’s starting a bank now. His answer, in large part, goes back to the market need. In an investors’ prospectus, for example, the bank cites Southwest Florida’s population boom: 22% from 2010 to 2018. That means lots of new customers for area businesses and, in turn, Blevins believes, new clients for the bank.

Another important factor in the why? Consolidation. To wit: In the past 15 years, the number of Lee County-based community banks has fallen from 12 to 2, while in Collier the tally has dropped from nine to one, according to the investor prospectus. The last Southwest Florida community bank was founded more than 12 years ago, the prospectus adds.

For startup advice, Blevins, 58, leaned on some area bankers who have already gone through the de novo process — one a while ago, one more recent. For the longer-range view, Blevins reached out to Craig Albert, founder and CEO of Sanibel Captiva Bank, which was founded in 2003. For a newer perspective, he contacted Murphy at Gulfside Bank. The gist of the advice: find what you are good at and hyper-focus on it.  And if it isn’t a core competency, outsource it. “I know I’ll never be the smartest guy in the room,” Blevins says, “but I surround myself with people who are the smartest people in the room.”

That’s why Gulf Coast Business Bank, he says, will offer clients lines of credit, SBA loans, equipment financing and other related services. “I can’t compete against a 3% car loan like a credit union can offer,” he says.

Blevins says a good target for the bank is to reach profitability in year three, 2024, when he projects it will have $160 million in deposits and nearly $180 million in assets.

One bite at a time

A key to Gulf Coast Business Bank’s strategy lies in not necessarily fighting bigger competitors, like national and regional banks, but accepting those lenders. Citing both the chaos from the rollout of PPP loans in spring 2020 and the 2008-2009 recession, Blevins says not over-relying on one bank is a must-do — in good times and bad. “We believe a business owner should have two banks,” he says, “and one of those needs to be a local community bank.”

Blevins, a Louisiana native, worked for banks in Dallas before coming to Southwest Florida in 1987. First he worked for big banks, doing commercial loans and overseeing lending teams at Bank of America and Wells Fargo. He later spent a decade at Encore Bank as Lee County market executive, staying on for three years after Lake Michigan Credit Union acquired the $400 million-asset bank in 2018.

Blevins seeks to raise between $20 and $25 million for Gulf Coast Business Bank. Through late August, he had about $14 million in soft commitments, and his goal was to get another $2 million a month through February 2022, when he hopes to open. “It’s a daunting amount to raise,” he says, “but it’s kind of like eating an elephant: you do it one bite at a time.”

Leaning on his informal banking advisors, Blevins says his aim with the bank’s board was to find a mix of experienced bank board members and invested community leaders. He also aims to rotate people on and off the board, to avoid groupthink, stale ideas and stagnant contacts. Gulf Coast Business Bank board members include Sandy Stilwell Youngquist, a prominent Southwest Florida restaurateur and former director with Florida Shores Bank; B&I Contractors President Gary Griffin; Seagate Development Chairman Bill Price; attorney and former Fort Myers Mayor Jim Humphrey; and real estate developer Guy Paparella, the board chair.

Blevins says the bank is on scheduled for its early 2022 opening, and he and board members are currently meeting with regulators about once a week.

About 130 miles north of Blevins, Darmody, in Clearwater, is also gung-ho about the market for a community bank. “We think there’s a great opportunity here,” he says. “A lot of people are moving down from the Northeast and Midwest and buying houses, and they all need banking services. If we can get out and shake hands and kiss babies, we can really make a difference in the market here.”

The backstory to the bank stems from Pinellas County entrepreneur Benjamin Atkins. The president of Waterfall Capital Investments, Atkins has overseen some 25 nursing homes through Clearwater-based Traditions Senior Management. Atkins was also an original investor and board member of Trulieve, a $700 million Tallahassee-based medical cannabis company.

Darmody, 63, who started his financial services career with Bear Stearns in 1980, met Atkins through mutual friends. After leaving Wall Street in 2018, Darmody worked with Atkins on some turnaround projects at both Traditions and Trulieve. At one point Atkins, says Darmody, told him, “nobody seems happy with their bank. So he said ‘let’s build a better mousetrap.’”

Darmody has some new bank experience: he helped launch and then for nearly 25 years he helped oversee Custodial Trust Co., a Bear Stearns banking subsidiary. Bear Stearns shut down in 2009, and Darmody moved on to other firms.

‘A de novo bank isn’t for everyone. It’s not just something where you come in and tweak a few things. You have to come in here with a mindset of a startup.’ Kevin Darmody, Waterfall Bank

But Darmody kept the Bear Stearns ethos — a mix of David vs. Goliath underdog drive, sharp elbows and a counterintuitive spirit — close to his heart. “I’m through and through a Bear Stearns guy,” he says. “We were all PSDs — poor, smart with a deep desire to be rich.”

That attitude facilitated an environment that led to long-term success on cutthroat Wall Street. “One thing we did that other banks didn’t do was we really listened to customers and were able to get things done they needed really quickly,” he says. “The Bank of Americas, the Wells Fargos and Citibanks… not so much.”

Darmody says he’s been putting in 12 hour days in the startup phase, commuting on some weekends to his other home in New Jersey. The biggest challenge, so far, has been hiring people. The bank has 32 employees. “A de novo bank isn’t for everyone,” Darmody says. “It’s not just something where you come in and tweak a few things. You have to come in here with a mindset of a startup." 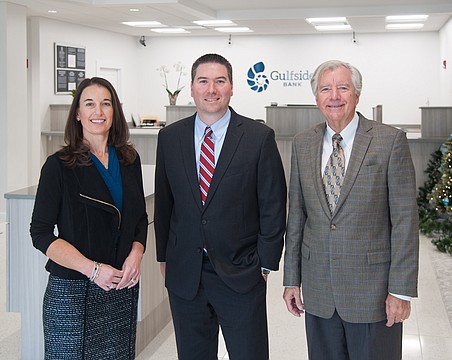 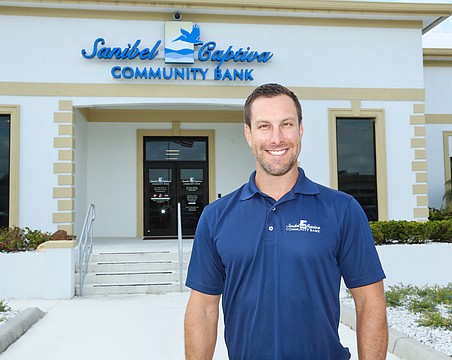 'Capitalism at Its Finest'

'All About the People' 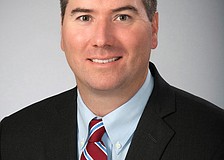 Banks across the region shore up capital levels 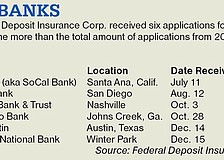