Darrell Turner’s had plenty of time in the spotlight, running one of the largest tree firms in the Sarasota-Manatee region for 35 years. At its peak in the early 2000s, the Bradenton-based company, Turner and Tree Landscape, did $20 million a year in sales and had 170 employees. The company filed for bankruptcy in 2016, and, while still operating, was acquired later that year.

After a short stint for the firm that bought his company, Fort Myers-based Juniper, Turner hasn’t stopped working. But now his roles are away from the spotlight, serving, essentially, as a business development director and rainmaker for hire for contractors and developers. Turner is using his four decades of networking — he’s so good at it the Gulf Coast Builders Exchange named its membership award after him — to connect companies with projects.

During the pandemic Turner, 61, is as busy as ever, saying several companies have “made some tough choices” to cut back on marketing and business development. “I’m a good alternative to someone full-time with benefits,” Turner tells Coffee Talk.

Turner’s work has paid off. He helped Aqua Plumbing land a pair of commercial jobs, each worth more than $3 million. He helped NDC win a job to build a $32 million multifamily project in Orlando and worked with Mosaic to secure some $85 million in projects. Several other deals are also in the works. One key to his success, he says, is he doesn’t have a minimum value to chase for work, so he can remain nimble on all opportunities.

While Turner says has misses the people he worked with at Turner Tree, and their families, he doesn’t miss the stress of the middle of the last decade. Back then, new business had dropped from 35 calls a week to three or four, he says, and by the end, the land it owned was worth more than the business.

Besides, Turner is more in his element now, connecting and doing deals. He’s holding about 12 in-person meetings a week, from coffees to breakfasts and lunches, in addition to four or five zoom or virtual calls. “I’m less stressed now,” says Turner. “Life is better.” 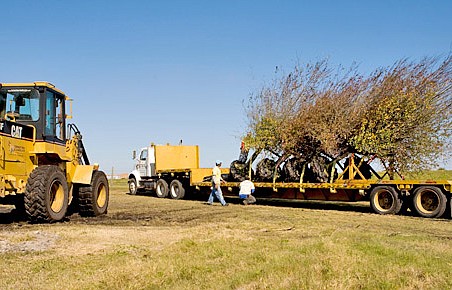 Landscape firm fights its way back

Turner holds out branch to unemployed