A pair of new office buildings planned for Tampa suburbs come in response to steady demand and a dearth of new supply.

Tampa’s Westshore District is expected to contain at least a pair of new office buildings by the end of 2021, in response to a lack of new construction and steady demand.

“We believe the timing is right, because there’s been no new office construction in the Westshore area for the past several years, dating back to the early 2000s,” says Randy Forister, the director of commercial real estate for the aviation authority and Tampa International Airport.

“We think we have a very, very strong project — one that’s at the entrance to the airport and one with key visibility and amenities that will include a fitness center, a café and conference space,” Forister adds. “And, we think we have a location that’s superior to any others in this area.”

VanTrust, which maintains a Florida office in Jacksonville, has in turn tapped J.E. Dunn to help design and construct the building from a HOK design.

VanTrust, which has developed in roughly a dozen states but whose work in Florida has been limited to a pair of projects in Jacksonville and Daytona Beach, submitted the lone proposal for Skycenter from among three finalists.

The aviation authority intends to occupy three of the bulding’s nine floors, or about 112,000 square feet, upon completion in 2021. It also intends to spend about $42 million outfitting the space with high-tech equipment capable of controlling airport systems from the building.

Nearby, Tampa-based Zons has unveiled plans to develop a 13-story mixed-use development with a considerable office component on a nearly one-acre site it acquired in 2015.

Construction of the planned Skyview Plaza, at 3413 E. Frontage Road, is expected to begin in early 2020.

Christopher Kasten, a Bush Ross attorney and a member of the Skyview development team, says the $90 million project will be completed during the first half of 2021.

Kasten also believes that neither Skycenter nor a handful of other office-dominated developments will have much of an impact on Zons’ plans.

“There’s so much pent-up demand in the Westshore area, it’s really never been a better time to be a landlord there,” he says. “So I don’t see the aviation authority or others having much of an impact on our project.”

In addition to four floors of Class A office space — each with a 25,000-square-foot floorplate — Skyview will contain a 138-room Cambria Hotel, ground-floor retail and restaurant space and several floors of parking.

The Cambria Hotel, only the third such property to carry the Choice Hotels’ flag in Florida after Miami and Dania Beach, will contain amenities such as a conference center, outdoor covered lounge areas and an infinity swimming pool.

“The Cambria will allow office tenants to bring in clients or guests and have them stay on property while also being in close proximity to the airport,” says Joanne Leblanc, a senior associate with Colliers International Tampa Bay, who will be leasing Skyview’s office space together with Mary Clare Codd and Juan Vega of the same firm.

“And with all the national attention that Tampa is getting, it bodes well for the property to be so visible — we have 150,000 vehicles a day passing by there — and to be near the airport,” Leblanc adds.

Both Skycenter and Skyview will seek rental rates of more than $40 per square foot, in line with the handful of other office developments being contemplated in the suburban Tampa area.

Among the other projects that have been proposed are Cousins Properties’ six-story, 180,000-square-foot Corporate Center at International Plaza V; Bromley Cos.’ trio of office buildings within its $500 million Midtown Tampa development, also near the airport; and Vision Properties’ Renaissance Center VII office building, in the corporate park of the same name.

Each project comes as Class A office vacancy rates in Westshore have been whittled down to about 5%, and large blocks of contiguous space desired by larger companies are increasingly harder to find.

Both Skyview and Skycenter also represent the kick off to larger developments.

At the airport, the aviation authority will connect the new building to a “people mover” that will be linked directly with Tampa International terminals, part of a $2.6 million master plan.

In addition, the aviation authority is contemplating hundreds of new hotel rooms on its 3,300-acre property, where a 2.6 million-square-foot rental car facility recently debuted.

When the $122 million Skycenter building is complete, the aviation authority intends to raze its current administrative space to make way for new curbside service to enhance traveler convenience.

The multiphase master plan is being designed so the airport can accommodate as many as 34 million passengers annually. Last year, a record 21 million travelers used the airport for flights.

Zons also has future plans beyond Skyview. Kasten says a Social Security Administration building adjacent to Skyview will likely be razed after 2021, when the agency’s lease there expires.

If that occurs, Zons intends to construct a $45 million office project there, also containing about 100,000 square feet of office space. 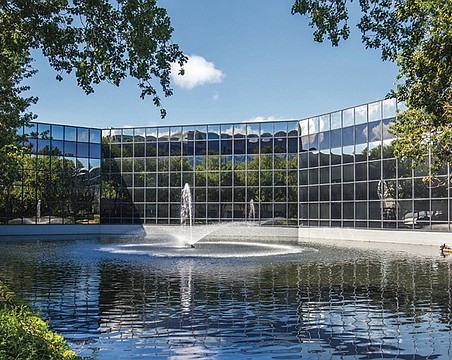 Westshore riding a wave of activity 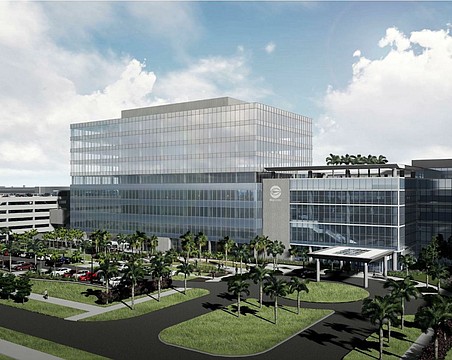 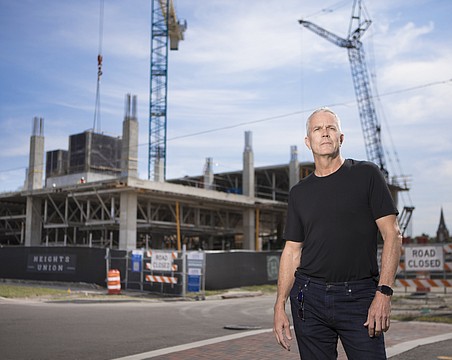 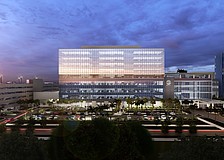 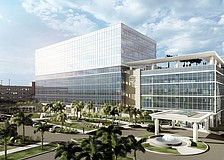 The Sky's the Center 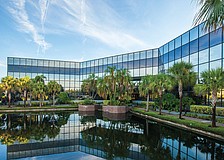 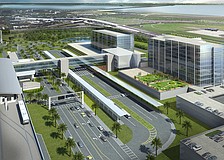 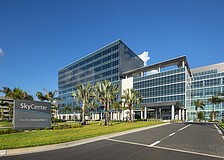