ACI Worldwide’s technology began as a solution to prevent an accidental nuclear missile launch. Now the firm aims to prevent competitors from creeping into its space.

During the Cold War, the federal government engaged a group of software engineers to devise a technology to provide real-time communication between Strategic Air Command in Omaha, Neb., the White House and nuclear missile silos in North Dakota. The goal: prevent an accidental launch.

It was the birth of fiber optics.

Key: Securing 20% of the world’s electronic payment activity through innovation.

When four of these engineering pioneers moved on, they knew their technology could have three additional primary applications: hospitals, the stock market and the automated teller machine. That, in turn, was the genesis of Applied Communications, now known as Naples-based ACI Worldwide.

“These guys were going to build a platform for all of those industries, and they ended up becoming famous for the ATM application, which was really way before its time,” says Phil Heasley, CEO of ACI. “They saw the technology and they used it. That was our origin. That's how we began as a company.”

ACI, in essence, was fintech before fintech. It's been 43 years since the company first introduced the ATM technology that allows customers to withdraw funds directly from their accounts through a machine that communicates with the bank, and directly with the customer’s account, in real time. Since then ACI has established itself — and remained — on the cutting edge of the electronic payment industry, growing into a worldwide billion-dollar company of 4,000 employees with offices on six continents.

Part of the company's strategy is to not just be in the electronic payment industry — but to reshape it. Electronic pay systems such as those developed by ACI, for example, permit new ways of commerce that were impossible until now. Demand, therefore, drives the company’s work to the same degree its products create demand.

“There is a lot of demand for what we do just because of the world moving away from cash and check to electronic payments, generally speaking,” says COO Craig ​Saks. “The flip side is we enable some things that were impossible in the past. Immediate payments will be a great example of that going forward.”

Of course, being such a dynamic company means there is a lot of space left over for risks and obstacles. In addition to the requisite risks associated with software such as undetected defects and government compliance, in a recent filing the publicly traded firm (symbol: ACIW, recent share price: $24.89 ) listed securing new customers; potential reluctance to migrate from on-premise to on-demand software solutions; contract renewals; or failure to complete new projects as factors that could adversely impact performance.

Among those risk factors, Heasley pointed to migration of customers from legacy software as a window in which they could also migrate to another company. “We are hopefully as painlessly as possible ushering out the old way of making payments, which is a little bit of a headwind for us, while growing with the new way of payments,” says Heasley. “Some of the stuff we do we have to discontinue and some of it we have to migrate over.”

The company, says Vice President of Investor Relations and Strategy John Kraft, has been able to maintain and even grow profit margins, from $49.2 million in 2016 to $81 million in 2017, despite what the executive calls a "whipsaw" over the past two years: in 2016 ACI made a divestiture and had a one-time "gain" from the sale. But in 2017, Kraft says in an e-mail, ACI settled a longtime lawsuit "that cost us a chunk of change." The company had a $29.3 million legal cost in 2017, SEC documents show.

ACI was founded in Omaha, where its largest office remains, one of dozens of research and development, data center, service and sales offices it operates. Executives moved the corporate headquarters to Naples in 2012, following for quality of life improvements.

Heasley, 68, and Saks, 47, attribute the growth to continuous innovation.

“I think we’ve always been right at the cutting edge,” says Saks. “Over the last 40 years, payments have evolved into many different choices, and you will struggle to find another company that has been able to integrate and co-mingle as many different ways to pay in as many different places around the world in a single technology solution. That really gives us an edge in the marketplace.”

ACI’s technology operates in the background, facilitating the exchange of money at multiple touch points of a transaction. There are roughly 1.3 trillion electronic transactions made per year around the world, according to Heasley, and ACI is involved in about 250 billion of them in at least one aspect. The company serves 17 industries from airlines to utilities with 57 products, and its universal payments solutions include retail, e-commerce, bills, real-time, immediate, merchant and risk management.

“Our customers like to say we’re an arms dealer because we equip almost everyone who competes against each other.” Phil Heasley

“Virtually every merchant, no matter how small, goes through the authorization process for a purchase, and therefore they have a relationship with the acquirer who is going to use their card,” says Heasley. “The chance we are involved at one stage or more in that transaction is about 20%.”

From banks to restaurants, here is a sample of ACI Worldwide customers:

By virtue of the growth in electronic purchases with established relationships, either at brick-and-mortar stores or via e-commerce, that 20% share grows organically. ACI earns 4/10th of one cent on average per transaction touchpoint with a maximum of six to seven points each, says Saks, including fraud protection and foreign connection service.

About 40% of ACI’s clients purchase its services on-demand. The remainder purchase software packages priced by a fixed number of transactions. Pricing includes options such as security and maintenance. Many customers, Heasley says, buy more transactions prior to the end of the contract.

“If you think about it, we don’t get paid very much per transaction, but if you are pushing 800 to 900 transactions per second or more, it adds up to something,” says Heasley.

The company provides software its clients can install and operate or an option that allows ACI to run their transactions. Clients include some of the world’s largest retailers, financial institutions, e-commerce providers, game systems and payment facilitators. Heasley says ACI works with nine of the 10 largest retailers in Great Britain, a similar number in France and is involved in nearly all electronic transactions in Mexico and Canada.

Of its 4,000 employees, Heasley says about 2,000 are engineers, stationed around the world, tasked with updating and developing software while keeping ahead of fraud. They’re also developing the next trend in electronic payments, immediate payment with no lag time in money transfers between accounts.

“One of the major evolutions in the payment world today is around the notion of immediate, real-time payments, the ability to move money from my account to your account instantly,” says Saks. “That's a very important next step in the world of pay. It's the ultimate end stage where all payments are going to go.”

Many countries, says Saks, are actively promoting, and in some cases enforcing, immediate pay. “We've had a really good run with participants in that movement,” Sax says. “We've supported banks and central infrastructures in immediate payment deployment on every continent. We have a wonderful footprint and great experience in the evolving world of immediate payment.”

All of that electronic financial activity creates points of entry for fraudulent activity. ACI’s engineers participate in “red teams” that attempt to hack into the company’s software to learn how to better prevent fraud.

“Anytime you have a new technology, you have a new class of criminal," Heasley says. "With sailing ships came pirates. With trains, train robbers. With the stagecoach, bandits. Every time you create a new innovation, you bring along the corresponding bad guys because you create opportunities for the dark side every time you do for the light side. It’s human nature, and it’s not going to change.”

How ACI took its headquarters from Omaha to Naples, via a six-year stop in New York City, begins with Heasley’s prior position as chairman of Visa from 1996 to 2003. As a customer of ACI, Heasley says he felt it was an underutilized technology. ACI was headquartered in Omaha at the time.

“I couldn't get Visa to see the value of real-time payments,” says Heasley, who joined ACI in 2005. “I became involved with (ACI) and then I told the board of directors you can’t be a global company and expect people to find their way to Omaha.”

The board voted to relocate the headquarters in 2006 to New York. There it remained until ACI purchased Atlanta-based S1 Corp. in 2012, a company 40% its own size; it considered moving there as the economics of operating a small yet global company in New York became untenable.

Three of the six top executives who moved with the headquarters to Naples in 2012 already had homes in the Collier County city, Heasley among them. Two of them have since retired. Saks was the company’s first hire to its new headquarters in early 2012, “and for a while I had the office to myself,” he says.

“I think we've been very good for the local community because we have brought in very senior people,” says Heasley. “The entire top layer and most of the second layer are here, and then we have a pretty good percentage of the third layer. The larger we get the more sophisticated we become.”

That level of sophistication includes experienced marketing and pricing personnel. In addition to employees, Heasley says Naples has proven to be an attractive draw for customers for corporate events.

“Getting customers to come to analyst day or to come to visit you we say, ‘Do you want to come to Omaha or Naples?’” Heasley says. “We get very good turnout here.”

Now with 105 employees in Naples, ACI is expanding into a second building at its Kraft Road headquarters. 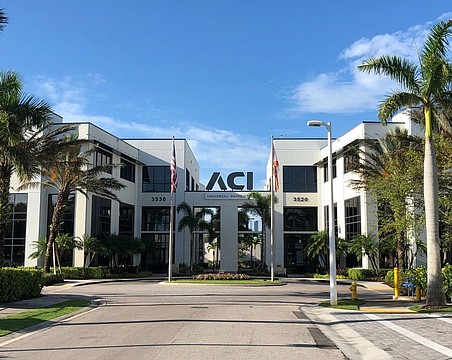 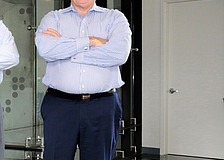 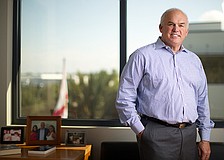