The list includes a $102 million Amazon warehouse in Lakeland on the Tampa end of the county and an Amazon “sortation center” in Davenport on the Orlando end. Both centers opened last year.

But builders are also seeing more education and health care projects, mostly because an improving economy has loosened up both private and public dollars. Those projects will be key to a sustained recovery in the county, and help move Polk away from a reliance on distribution projects.

“Construction is on an uptick from previous years due to an increase in private business having a few good years since the downturn in the economy,” says Bruce Scamehorn, CEO of Tucker Construction in Winter Haven. “We've also seen a steady continuation of projects for bid from the public sector throughout Polk County.”

The City of Lakeland permitted 2.85 million square feet of warehouse and industrial buildings over the last two years — nearly as much as the previous seven years combined. Polk County issued 15,197 building permits in 2014, a 12% increase over the previous year. The county hasn't experienced numbers close to those since 2006-2007, Building Director Chandra Frederick says.

Homebuilding has also picked up after prices began to stabilize, although new permits and construction remain at 21% and 35% of their peak levels, respectively, according to an analysis by the Central Florida Regional Development Council. There were 2,547 residential permits issued last year in Polk, with a total construction cost of $500.4 million, about the levels seen in 2007-2008, the CFDC reports.

The homebuilding resurgence will lead to new school construction projects while Polk's population continues to grow, says Frank Kendrick, whose NuJack Companies Inc. counts education structures among its specialties. And with the Florida Legislature freeing more capital dollars for schools, companies like Kendrick's have been busy with updates to existing schools.

NuJack, for example, was the general contractor on the $100 million Innovation, Science and Industry Building at Florida Polytech. The 160,000-square-foot oval dome designed by famed architect Santiago Calatrava startles I-4 travelers not expecting a futuristic structure when passing through cow pastures. NuJack also completed a $6 million stadium for Southeastern University last fall.

Kendrick says NuJack positioned itself for growth during the downturn by expanding to southeast Florida. Unlike the Lakeland headquarters, the firm's West Palm Beach office focuses on community redevelopment agency projects. “Our pond was getting crowded, so we found another place to fish,” Kendrick says.

Now, with business picking up, Kendrick plans to hire at least four more people, to add to the staff of 13. While he acknowledges some of his subcontractors have difficulty finding skilled craftsmen, Kendrick says there's been no shortage of talent for NuJack's engineering and supervisory openings.

Kendrick notes health care work should soon be another revenue source for construction firms in the county. That includes a major project at Lakeland Regional Health worth more than $250 million.

To Kendrick, the most immediate challenge facing the construction industry in Polk is the possibility that local governments might impose new impact fees. The county government issued a moratorium on impact fees in 2010 to spur construction, but the November failure of a ballot initiative to fund road building has led to calls to reinstate the fees.

Otherwise, Kendrick is optimistic about the next two to five years, seeing balanced growth among all construction sectors. Says Kendrick: “A rising tide raises all ships.”

Central Hub
Polk County construction firms have attempted to diversify from working on distribution projects. But Polk's centralized location between population hubs is why large companies, such as Amazon, utilize it for distribution.

In addition to the two Amazon centers that opened last year, other large distribution projects in Polk County include:

Southern Wine and Spirits has begun work to expand its current 653,000-square-foot distribution center along the Polk Parkway in Lakeland by 440,000 square feet. Cost of the project is $55 million. 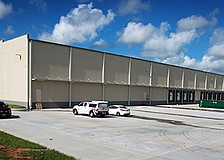 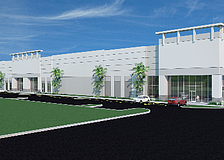 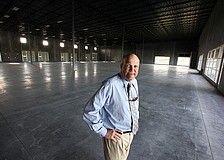