Efforts to manufacture solar energy systems in China and Europe have drawn a lot of attention, but a Lake Mary-based company is making a bid to become a global player in the industry.

BlueChip Energy LLC and its subsidiaries manufacture photovoltaic panels and install solar systems for commercial and residential use. The company is also building a 40 megawatt solar farm in Lake County that will provide energy for about 8,000 homes.

“We have the complete solar chain from start to finish,” says Lawrence Hefler, director of corporate marketing for BlueChip Energy. “We're the only manufacturer of photovoltaic panels in Florida and one of the few in the U.S.”

BlueChip subsidiary Advanced Solar Photonics (ASP) is the manufacturing arm of the company and has the capacity to manufacture up to 75 megawatts worth of solar panels each year. Helfer says the company plans to add another 25 megawatts of capacity in the near future.

Most of the panels produced by ASP are sold wholesale to project developers in Europe, Hefler says. The manufacturer sells the rest of its panels to commercial and residential users in the U.S. by BlueChip.

“The way our company is structured, we can match the Chinese prices,” Hefler says. “Plus we have a large enough capacity we can manage our costs.”

BlueChip's challenge is market price, something that challenges the industry because the systems need to be affordable for mainstream consumers.

In the Southeast where sunshine is abundant, consumers pay lower prices for electricity generated from coal-burning power plants than other parts of the country. So it could take years for installation costs of a solar-powered system to pay off.

Hefler says educating consumers about solar costs and negotiating with utilities to buy back power at competitive prices can overcome this challenge, as will increased competition to drive costs. The state of Florida could assist, Hefler adds, by developing a Renewable Portfolio Standard (RPS) that sets a goal to have a certain percentage of energy generated by renewable energy sources — for instance 20% by 2020.

Hefler says a commitment by the state to set a renewable energy goal would help spur private investment in solar technologies.

BlueChip Energy is taking its own advice when it comes to using renewable energy. Hefler says the company is currently installing panels atop its 260,000-square-foot manufacturing facility and on 24 acres of nearby land. All together the panels will generate 10 megawatts of energy, enough to power all of BlueChip's operations.

Its largest undertaking is its 40-megawatt solar farm on 140 acres in Lake County. The company has inked an agreement with Progress Energy to sell the power generated from the farm to the utility.

The farm will be built in stages with the first 10 megawatts to come online in 2012. All told the farm will have 174,000 photovoltaic panels, making it the largest in Florida, and the third largest in the U.S.

Hefler says the company has nearly tripled its workforce to 96 employees in the last 18 months as both manufacturing and installation has grown. To date, the company has installed more than 100 residential and commercial solar systems. 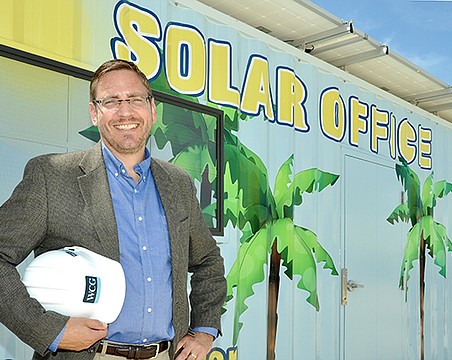 It's always sunny at Lockheed Martin

Bring on the sun 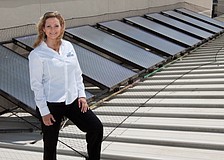 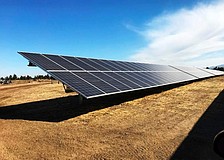 New solar power plant to be built in area