Two-year colleges across Florida are trying to break though the education establishment. One Gulf Coast school is primed for battle.

Lars Hafner chuckles at the memory: First- and second-year college students so excited about the name change at their school that they were lining up in droves to take iPhone pictures of themselves in front of the new sign at the school's entrance.

That's the scene Hafner saw in July, when the school he presides over, State College of Florida, changed its name from Manatee Community College. Says Hafner: “The students haven't missed [anything] in this transition.”

The name change was the backdrop to an even larger campus transformation: The school will begin offering a four-year degree in nursing in January. It has only offered two-year degrees since it was founded in 1958, in areas such as building construction and paralegal training.

Hafner hopes to add six more bachelor's degree programs by early next year, including ones in energy technology management and public safety administration/homeland security. All the new baccalaureate degrees require approval from the state board of education.

“The needs in the community were not being met,” says Hafner, hired as SCF's president in July 2008. “It was an easy decision for us to move forward.”

But adding more programs to the school's offerings is proving to be a perilous venture. The foremost hurdle is its largest and most recognizable competitor — USF Sarasota-Manatee.

The local branch of the larger Tampa-based campus opposes most of the four-year degree offerings SCF is seeking to add. Indeed, USF Sarasota-Manatee President Arthur Guilford told the Florida Department of Education that a four-year nursing program would duplicate what his school already offers.

While USF Sarasota-Manatee officials say they aren't trying to start a turf war with SCF, they also oppose five of the six four-year programs SCF is proposing. The main gripe is that duplicating course and degree offerings can bring down the amount of state funding each college receives.

“The state college system and the university system are designed to complement one another, not compete with each other,” USF Sarasota-Manatee spokeswoman Chris Manring says. “To have a duplication of effort just doesn't make fiscal sense.”

To be sure, SCF isn't the only community college on the Gulf Coast or in Florida that is looking to move up in the education establishment.

In 2001, St. Petersburg College was the first community college in the state to offer bachelor's degrees through a bill passed by the Florida Legislature aimed only at that school. In 2007, the state allowed nine community colleges to begin offering four-year degrees, including Edison College in Fort Myers.

As of 2009, 14 of Florida's 28 community colleges either offer four-year degrees or are hoping to do soon.

The goal of the expansion was to provide another source of workforce training that the four-year schools could not or would not offer. Some of the bigger schools, however, complained that the move was undercutting their enrollment figures.

Legislative hoops
Hafner, in meeting with local business and government leaders, says he always thought of four-year degrees as a logical step for SCF. Just like USF officials, Hafner downplays an “us vs. them” nature to the budding controversy with USF, saying that he and SCF's board wouldn't have gone for the changes unless community leaders asked for it.

“The job of this college,” says Hafner, “is to turn [quickly] and provide those needs.”

Besides, adds Hafner, SCF isn't about to start offering psychology or history degrees. By state regulation, it's only allowed to offer four-year degrees in workforce disciplines.

Hafner presents a formidable foe in any college battle: His past-life experiences include playing college basketball and serving as a state representative in the Florida House for 12 years.

Hafner grew up in St. Petersburg, the son of a preacher. After considering following his father's career path, Hafner instead attended St. Petersburg Junior College and then, after two years, the State University of New York at Buffalo. Hafner was the basketball team captain at both schools.

Then, in graduate school at the University of Maryland, Hafner got into politics by working for U.S. Sen. Paula Hawkins, R-Winter Park. By the time he was 27 years old in 1987 Hafner was in elected office himself, having won the seat for District 54 in St. Petersburg. A Democrat, Hafner won his first election by 147 votes.

Hafner became a leading voice for his party in Tallahassee during his 12 years in office. Committees he chaired or organized included the Tampa Bay Democratic Leadership Council and the House Democratic Caucus.

The rise in Hafner's legislative career mirrored the climb in his academic administration career. He started out as a professor at St. Petersburg College, working his way up to the provost position.

Serving in the state house during a period of major growth and transition for Florida is something few of Hafner's current peers can claim. “It gives me a unique perspective on the college system that most people wouldn't have,” says Hafner, 49.

Budget constraints
While SCF's name change and degree-offering expansion as dominated the news, Hafner has other issues to deal with, also.

First off, the school's budget, like other colleges and universities that rely on state funding, has taken a recession-era hit. The total budget for the school for the 2009-10 fiscal year is $53 million, down from $61 million in the previous fiscal year.

Hafner approached the budget cuts by thinking like a business owner: The school evaluated all its costs and looked for any way it could save money. One way, for example, was to eliminate using paper course schedules by making the entire catalog available only online.

Another mission was to raise the school's productivity by making sure classes were more filled up. In the past year, Hafner says SCF's classroom productivity levels have hovered around 93%, after being less than 70% in previous years. That alone has saved the school $200,000, says Hafner.

The budget cutbacks, meanwhile, stand in contrast to the school's growth spurt. In that area, the school has been a state leader, passing 10,000 in enrollment last year with 430 employees. It's the second-fastest growing community college in the state by percentage growth and it's in the top five in raw numbers.

That's a long way from 1958, when the school had 502 students and operated as Manatee Junior College out of a local high school. The school moved to its own campus within a year and later grew to add locations in south Sarasota County and east Manatee County.

An 'emerging problem'
The potential additions in baccalaureate degree offerings, however, remain the most significant aspect of Hafner's presidency so far. Even though he leads the effort, he says he prefers to let the community leaders who have asked for the programs do the persuading.

Those leaders include Bradenton Deputy Police Chief William Tokajer, who says that as it is now, local police officers have to go to St. Petersburg or Tampa for a four-year degree in a specialized law enforcement discipline such as homeland security. That kind of degree, says Tokajer, is essential for the Bradenton Police Department for recruiting and promoting its employees.

Robert Garcia, an executive with Tampa Bay Trane, an air-conditioning sales and service company, has similar feelings about SCF's proposed bachelor's degree in energy technology. “That's one of the most difficult spots for me to find people to work with,” says Garcia. “It's almost impossible.”

USF Sarasota-Manatee officials say the energy technology degree is the one degree proposal they aren't opposing, as they believe that program would be unique to the area. But USF does plan to oppose the other degree offerings
SCF is proposing, like it did for the nursing degree.

The battle could grow contentious, not only in Sarasota-Bradenton, but in other areas of the state as well due to the various government entities and boards that have a stake in what school is allowed to offer what programs.

That lack of structure in the system, not just in the local area, is the sign of a true issue, says State Rep. Keith Fitzgerald, D-Sarasota.

“This is an indication of a problem emerging all around the state,” says Fitzgerald, a political science professor at New College in Sarasota. “The problem is, there is no referee.”

The problem could end up being batted around in Tallahassee in the 2010 session, although Fitzgerald thinks it's unlikely there will be any agreement on what to do. Some legislators will want to create too much oversight, while others will want to continue the path started by Gov. Jeb Bush of giving individual schools and colleges more autonomy.

“In the long run, someone will have to address this problem,” says Fitzgerald.

State College of Florida, in transforming itself from a two-year school to a four-year college, is attempting to add as many as seven new bachelor's degree programs.

The Florida board of education approved SCF's first degree proposal, a bachelor's in nursing, in March. A second potential degree the school is proposing is in energy technology and management, which would teach energy conservation and techniques for people working in the commercial and residential buildings industry.

Administrators at USF Sarasota-Manatee wrote a letter to the board of education opposing the nursing degree, saying it would duplicate a program their school already offers. School officials say they won't oppose a degree in energy technology, but they do think SCF's five other proposals duplicate programs and degrees already offered at their campus.

Those degree proposals include:
• Health services administration: Prepares graduates for a management-level job in a health care facility;
• Public safety administration/homeland security: Courses include terrorism prevention and crisis and disaster response;
• Applied science in technology management: Brings business principles to the IT field;
• Early childhood education: Prepares graduates to work as a teacher or administrator in pre-school and other programs;
• Exceptional student education: Prepares students to serve as special education teachers and to work with children with disabilities.

Ringling College of Art and Design Keeps on Growing

While the two largest higher-education schools in the Sarasota-Bradenton region fight out a battle of degree offerings, another college in the area has been growing into one of the largest of its kind in the country.

The Ringling College of Art and Design has grown its student base, revenues and majors over the last two years faster than most other specialized schools in the country. In the process, the college has raised its national profile to the point where it is now talked about among top-tier arts and graphics schools such as the Rhode Island School of Design; Parsons; and the School of the Art Institute of Chicago.

Ringling now has 14 majors, up from six in 2006. New offerings include digital film; game art and design; and the business of art and design. The business-focused degree is a favorite of Ringling President Larry Thompson, who has said one of his missions is to put an end to what he calls the myth of the starving artist.

“We are infusing business with art,” Thompson said during a recent tour of the school for local business leaders and executives. “It's something no one has ever done before.”

The student count at Ringling is up as well. Enrollment is at an all-time high for the 2009 fall semester, with 1,318 students. The school had 850 students 10 years ago.

Two other aspects showcase the growth at Ringling: Internally, the school's annual revenues are up 31% since 2006, from $37.1 million to $48.7 million last year.

And externally, signs of the schools' growth are visible throughout its 42-acre campus a few miles north of downtown Sarasota, off U.S. 41. That includes a new academic building and a new residence hall, which totaled $50 million in capital costs.

Says Thompson: “We're an economic engine all by ourselves.” 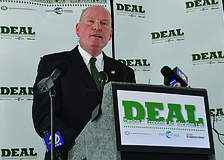 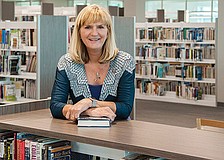 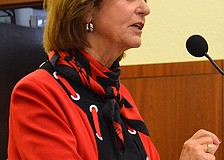 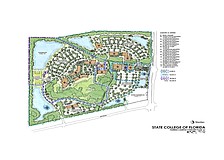