The role of court-appointed receiver in an investment scam case — such as an alleged $400 million Gulf Coast-centered fraud — is one part Sherlock Holmes and one part Robin Hood. Burton Wiand plays both roles.

The last weekend of January was a muddle of fury and rage for anyone who invested money with Sarasota financier Arthur Nadel: The money manager was arrested Jan. 27, accused of bilking investors out of $400 million in a crippling Ponzi scheme.

While Tampa attorney Burton Wiand had seen news reports of the arrest, he thought he would spend the weekend watching European soccer games on TV and hanging out with his kids. Maybe take the boat out.

But a phone call from a high-ranking official with the Securities and Exchange Commission put an end to those plans.

The SEC wanted to know if Wiand would consider being the court-appointed receiver in the case, a job that would entail him finding ill-gotten gains and giving back money to hundreds of victims.

In essence, Wiand would become the legal voice for all of those enraged and furious investors.

Wiand was one of three Gulf Coast attorneys on list of potential receivers given to U.S. District Judge Richard Lazzara. The judge choose Wiand in part because the attorney had almost been there before: In 2005, Wiand was appointed the receiver in the case of Howard Waxenberg, a Bradenton hedge fund manager who collected more than $70 million from investors and clients nationwide in dealings authorities later determined to be a Ponzi scheme.
Waxenberg killed himself in 2005, just as the scam was unraveling.

Now, just like in the Waxenberg case, Wiand, an attorney with Fowler White Boggs, has been assigned the arduous and expensive task of recovering millions of dollars in assets, figuring out who is owed what and returning the money.

A costly effort
Wiand is taking on the task through legal letters, lawsuits and threats of lawsuits — including a third party suit Wiand recently initiated against Holland & Knight, one of the largest law firms in Florida.

That lawsuit, filed Aug. 31, alleges that Holland & Knight attorneys, who had represented Nadel's investment funds, breached their duty to investors by ignoring the accused fraud Nadel was perpetrating. Holland & Knight has denied the allegations.

Wiand has a team of eight Fowler attorneys and associates working at least part-time on the Nadel case. There's also a small army of forensic accountants, IT professionals and stock-trading consultants looking into all aspects of how Nadel ran his operation.

The bill for the first five months of receivership work recently surpassed $1 million, a fee that could triple by the time the case is closed. So far, in five months on the case, Wiand has recovered about $2.1 million from investors who profited off Nadel's accused crimes. Money will not be distributed to victims of the fraud until all the funds are collected, a process that could take several years.

The overall arch to Wiand's strategy is to talk tough and back it up quickly with legal action — an approach befitting the son of an FBI agent who was the number two man in the bureau's New York office when J. Edgar Hoover ran the agency.

“Nadel set up several shadow bank accounts [but] we are now getting a pretty clear picture of what investors put in and what they lost,” says Wiand. “And there are some people who made significant money out of this. We will become very familiar with them.”

'False pretenses'
Nadel is so far the only individual to face criminal charges in the case. But as in any Ponzi scheme, investors who profited from the accused fraudster's crimes can be legally obligated to return the money, even if they had no idea a crime was being committed. Many times that falls under state and federal laws that allow receivers to file what's known as a clawback lawsuit, where people that made money off a crime could be ordered to return their profits.

“The money that was distributed was all stolen money,” says Wiand. “Nadel took it under false pretenses.”

The legally backed ability to pry money from one entity and give it to another puts a court appointed receiver in a fraud case in a powerful position. In many respects, a receiver is the second-most powerful person in a fraud case, right behind the judge.

“It's very much like a bankruptcy trustee position,” says Drew Clayton, a Sarasota attorney who has argued cases against Wiand. “He not only has to figure out where the money went, he's got to get as much of it back as he can.”

And many who know Wiand, either through working with him or against him in court, say he's the ideal attorney to handle the complexities of the Nadel case. John Fedders, the former director of the Securities and Exchange
Commission's enforcement division, supervised Wiand for four years and speaks highly of his ability to get results in difficult situations.

“Burt is one of the most outstanding SEC enforcement lawyers of the last 30 years,” says Fedders. “He was a star.”

Fedders, who now practices law in Washington D.C., adds that today Wiand is one of the most respected defense attorneys in the country for representing firms and entities accused of securities law violations. Says Fedders: “The highest compliment is that I now refer business to him.”

Al Fishman, a San Francisco attorney who worked with Wiand at the SEC in the 1970s, says he was always impressed with how Wiand refused to give up on a problem. “Burt is a very creative guy,” says Fishman. “You knew if
Burt was on the case, he would figure out what the problem is and how to solve it.”

Wiand was born in Kansas City and grew up in the Midwest and later in New York City, when the FBI transferred his father there. Wiand first found his way to Florida in the late 1960s, when, during summer breaks from college, he worked as a deck hand on tankers and tugboats that traveled the east coast. In addition to living expense-free on the boats, Wiand got $30 a day — and double time on Sundays.

Wiand's first job after law school was with the SEC, where he worked for 13 years. One of his mentors there was his first boss, Stanley Sporkin, who went on to become a federal judge and a prominent national legal scholar on securities law issues.

Wiand joined Fowler in 1989. He is now a shareholder and the lead attorney in the firm's securities and financial services group.

Myriad complexities
But out of all of Wiand's cases, even Waxenberg, Nadel has the potential to make it to the top of the resume.

First off, at $400 million the case is one of the biggest frauds he has ever worked. It's also one of the more complicated investment schemes he has seen, as Nadel spread the money around in six funds and a myriad of businesses. “All of that complexity is slowing us down a little,” says Wiand.

Wiand says he will likely be filing about 100 clawback-false profit lawsuits requesting investors to return money. So far, he's been sticking mostly to a legal letter, which states the case law as well as a discount offer: Pay now and keep the case out of court, Wiand has told many of those investors, and you can keep 10%.

A handful of investors have responded to the letter. One individual returned $10,000, while a trust returned $300,000 in false profits. An investor in Las Vegas recently sent back $192,000.

Another side of the Nadel case that adds to the complexity is that the financier had several businesses in the Sarasota area that were connected to the scheme in some way. The businesses include a jet center in Venice and homebuilding company in Englewood, in south Sarasota County.

Says Wiand: “The case entails me taking over these businesses and getting what I can for investors.”

A defense attorney for Arthur Nadel, the Sarasota financier accused of running a complicated Ponzi scheme that defrauded investors out of $400 million, recently told a federal judge that his client has “lost everything.”
Nadel has been jailed since January, charged with 15 counts of investment and securities fraud. Mark Gombiner, a federal public defender representing Nadel, wrote a letter to U.S. District Court Judge John Koeltl Sept. 25 asking for Nadel's bail to be reduced.

“After eight months in jail, Nadel's circumstances have been so dramatically reduced and his thoughts so focused on concern for his wife that he has no desire whatsoever to flee and incur any risk to her,” Gombiner wrote.
Gombiner added that Nadel, 77, has “lost everything” and since the case isn't close to going to trial, he could be released on a $1 million bond guaranteed by his wife's Sarasota home.

Koeltl denied the bail reduction request. Nadel, who has pleaded not guilty, is being held in federal jail in New York. 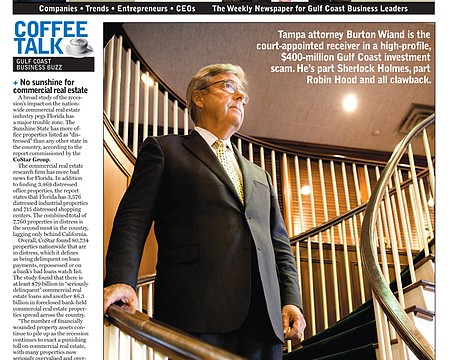 Nadel victims to get $26M

Nadel victims to get $25M