A coveted Gulf Coast waterfront property has stymied past developers. The latest group to give it a shot hopes they have the answers — and the timing.

A team of well-known business executives are hoping to fix what many say is one of Sarasota's greatest weaknesses: The lack of a downtown convention and events center that can draw people to the region for reasons other
than the beach and arts.

The group, CMR Bayside Associates, is setting its sights on building the public-private center and an adjoining mixed-use project on the site of the former Sarasota Quay — considered one of the best undeveloped bay front properties in the region. The events center side of the project as currently planned involves building a $30 million theater that could hold up to 5,000 people.

“This is a very dense piece of property with a lot of opportunity attached to it,” says CMR Bayside's Mark Famiglio, a local entrepreneur and commercial property owner.

Building on the site of the Quay, on 15 acres on U.S. 41 opposite Fruitville Road, can also be complicated. The last two entities that tried to develop projects on the property failed, although the economic downturn certainly played a role in at least one of those failures.

And for CMR Baysides' go-around to succeed — at least the convention and events center portion — the developers will need Sarasota city and county governments to fund part of it. That's a long line with a small pot at the end.

“This is a tough time to be looking for money,” says Sarasota County Administrator Jim Ley, who has not spoken officially with Famiglio's group about the Quay but is aware of their potential project. “It's a difficult time to dream.”

Through Madden's contacts the group had initially considered building a public events facility centered around a minor league hockey arena on the site. But CMR Bayside is now focused on building a high-end, 100-foot tall theater that could host everything from school events to the circus to interactive puppet shows.

The proposed mix-used portion of the project includes a 250-room hotel and several parcels of retail real estate. Famiglio says he's in talks with several big-box retailers who have expressed interest in the project.

The fact that all this is happening during a recession and in a city considered by many developers to be hostile to growth and big-ticket development projects only adds to the difficulties. “The challenges are vast and varied,” concedes Morris. “We are trying not to overpromise and under deliver.”

• Price: Morris says the purchase of the land will likely cost about $40 million, in a deal made up entirely of equity from the CMR Bayside quartet — no bank financing. “We would love to finance the purchase of the grounds,” says Morris. “But that would make it that much harder to finance the hotel phase.”
Even at $40 million, which is $20 million less than what the land went for in 2004 — before the cost of demolishing the Quay structures and some residential units — the price might not make sense. One local developer says he thinks a hotel would have to be getting an average daily room rate of at least $150 a night to make a $40 million price tag work. With the Ritz-Carlton, Sarasota and the Hyatt Regency sandwiching the Quay, that kind of rate will be tough to attain on an annual basis, this developer says;

• Experience: While the businessmen bring strong credentials in their respective fields, none of them have completed a project this significant. “We are smart enough to know we aren't construction people,” says Morris;

• Politics: The Sarasota City Commission would have to approve the project, including some zoning changes and code amendments;

• Timing: The developers say they have a self-imposed deadline of the end of November to decide whether to buy the property. CMR Bayside officials say they are working directly with officials of Anglo-Irish Bank, the lender that took control of the property from Irish developer Patrick Kelly when his Quay project failed.

Timing is especially important because Anglo-Irish has a high amount of non-performing loans on its books and is under regulatory scrutiny by the Irish government. Indeed, CMR Bayside says it's working under the assumption that if the Quay isn't sold by the end of 2009, it could be placed into a nationalized 'bad loan' portfolio in Ireland and eventually auctioned off as part of a bigger group of loans.

“If we don't do something with it,” says Famiglio, “it will end up in an Asian REIT somewhere.” 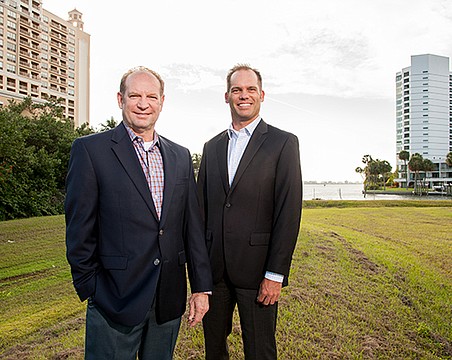 'Bring Life to the Streets' 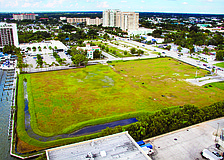