Eddy Garcia has always been a disciplined real estate buyer, only choosing well-located sites in the path of growth. He hit a home run when Lee County picked his land for the future spring training stadium of the Boston Red Sox.

When the new $55 million Boston Red Sox spring training stadium opens in 2012, home plate will be in the middle of Eddy Garcia's land.

The Coral Gables entrepreneur has worked quietly in development in Lee County for more than a decade but recently gained the spotlight when the Lee County Commission picked his site for the new Red Sox stadium.

The 44-year-old soft-spoken principal of Watermen Development Group says success has come his way because he has always stuck to the strategy of buying sites in corridors of growth. Perhaps more importantly, he never got caught up in the land boom by paying too much or straying too far from the urban core, restraint that has paid off today.

Lucky or not, real estate investors may want to follow Garcia's moves. So far, the entrepreneur has avoided the fate of many larger competitors who got buried in the real estate collapse.

Garcia acquired the 125-acre Red Sox site near Interstate 75 in Lee County in bankruptcy court in 2004, beating out competitors because few people knew the land was even for sale. He initially envisioned a mixed-use project of homes, offices and warehouses, but jumped into the Red Sox site selection process even though his site wasn't initially favored.

“When the market collapsed, he came up with a new idea,” Tasman says. “He studies real estate and knows how to buy right.” Lee County recently agreed to pay Watermen $20 million for the land that Garcia acquired in bankruptcy court for $16 million in November 2004.

Character loan
Garcia grew up in Miami, the son of Cuban immigrants who moved to the U.S. to work in the 1950s (they stayed when the revolution prevented them from returning home). Garcia's father worked in a cardboard-box factory and his mother in a garment factory, watching every penny and passing the wisdom of thrift to their son. “They still live in the same house today,” Garcia says.

Garcia had originally planned to become an accountant, but got a degree in construction management from Florida International University in 1987 instead. Like so many other successful entrepreneurs in his field, Garcia started by buying, remodeling and reselling existing homes and reinvesting the profits into buying more.

By 1994 Garcia was building new homes and launched his first development, a 58-unit town home project in Miami Lakes. To do this project, Garcia recruited four high-school buddies as investors, used up all his savings and got a “character loan” from a small community bank in the area. “I sold my car and everything I had,” Garcia recalls. “I couldn't fail.”

The banker on that first development project warned Garcia to keep running and imagine his banker as a mean dog chasing him. “The day you stop,” the banker warned Garcia, “the dog's going to bite you.”

Garcia says he quickly learned from that first project that the key to success is to keep overhead low. He worked every day, mindful that the bank-interest clock never stopped ticking. “We had no staff,” Garcia recalls. “We watched it out of the window every day.”

With the first successful project under its belt, the company grew. “It's a real American success story,” says John Fumero, who heads up Watermen's business development and government affairs.

Garcia became skilled at finding parcels in urban areas that were never for sale, avoiding competitive bidding. “We always stuck to entry or move-up homes,” he says. Speed was essential and projects never took more than two years. “We had to turn our profits quickly,” he says.

Looking for land in Lee
By 1998, it was getting harder to find deals in the Miami area and Garcia started scouting sites in Lee County. “I wanted to do larger, more upscale developments and I couldn't achieve that in Dade County,” Garcia recalls.

At the time, most of the development focus was on Collier County to the south. Garcia figured building would eventually move north as Naples ran out of land. “We liked the demographics here,” he says.

Watermen's timing was good because Lee County was just starting to attract national builders. The company developed five residential projects and three shopping centers in Lee County. It had transitioned to a development company, but still evaluated land deals with an eye toward how profitable it would be for builders. “We always put our builder hat on,” he says.

But as the land boom grew, Garcia says deals were getting harder to find. “The development margins were disappearing. We couldn't find value,” he says.

Garcia found a few deals in 2004, including the 125 acres on Daniels Parkway near I-75 that will become the site for the Red Sox spring training stadium. But he wasn't swayed by the promises of riches further east into Florida's heartland and hasn't done any deals in the last few years.

While developers rushed into uncharted territory such as Hendry and Glades counties east of Lee County, Garcia hung back. “The fundamentals weren't there,” he says. “We weren't sold on it.”

Instead, Garcia focused on the parcels he controlled in Lee County. That's paid off, as rivals stumbled in the real estate downturn.

Although he lives in Miami because of family ties, Garcia commutes weekly to Fort Myers. “All my business is here,” he says. With land prices down substantially from their peak, Garcia is scouting for opportunities to buy, though financing is still tough to obtain. “I think the market has overshot itself on the low end,” he says.

How Garcia hit a homer

Eddy Garcia honed his real-estate acquisition skills in Miami, where finding a good deal on land takes digging through records and knocking on doors because it's usually not for sale.

Those land-ferreting skills served him well when he came to Lee County. In 2004, he had his eyes on two parcels totaling 125 acres on Daniels Parkway, just east of Interstate 75.

Daniels is a major thoroughfare that cuts east and west through Lee County and is bisected by I-75 and Treeline Avenue just north of Southwest Florida International Airport. Garcia says development was slowly moving east of I-75 and several successful residential developments including Colonial County Club and Pelican Preserve had emerged in that area.

Although it didn't have any “for sale” signs, Garcia discovered that the land was part of a bankruptcy case of a local eye surgeon. Initially, Watermen offered $8 million, but the sellers turned it down. The creditors wanted to use

Watermen's offer as a “stalking horse” to try to attract better offers and pay Watermen a fee in exchange. Garcia refused because he wanted to own the land, so he agreed to pay $14 million for it.

Meanwhile, David Kraizgun, another real estate investor, also discovered the land in bankruptcy and offered $16 million. As it turns out Garcia and Kraizgun had been partners in real estate deals before, but neither knew of the other's interest in the Daniels land. When both men realized they were competing for the same parcel, they joined forces and agreed to pay $16 million together. “We had to laugh about it,” Garcia says looking back.

The key was keeping other prospective buyers away. Their $16 million contract stipulated that the land wouldn't be put up for auction by the bankruptcy court. In late 2004, that land might have brought unreasonably high offers. “It was a huge land grab in those days,” Garcia says.

Once they acquired the land, Garcia and Kraizgun planned to develop it as a mixed-use project with offices, warehouses and shops. They got the city to annex the property, giving the developers more flexibility on its uses.

But the market started to cool off in 2006 as the real estate downturn began to take hold.

When the county started looking for land for the new Red Sox stadium, Steve Brown, vice president of development for John Madden Co., called Garcia and urged him to bid for it. Brown is planning a corporate research park across Daniels Parkway on airport property that has strong political backing for new industry.

Still, Garcia says early indications were that a site in south Lee County was preferred. “We were the underdog because we were at the northern boundary,” he says. “We had to fight to stay in.”

To gain support, Garcia made presentations to local hoteliers who might benefit from the spring training crowds and environmentalists who preferred his site because it would have the least environmental impact. Unlike rivals who hired public-relations firms to schmooze politicians and influential people, Garcia did all the legwork himself. “I was really at the forefront of every meeting,” he says. “I felt that was the best strategy.”

That strategy paid off. In the final negotiations, Lee County agreed to pay Watermen $20 million for the land. “We voluntarily dropped our price multiple times,” Garcia says. He anticipates the deal to close within a year. 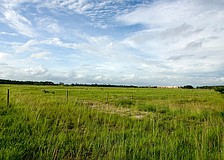 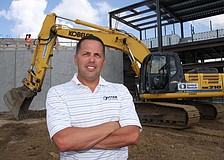