Stephen Martin is touting a funky-themed Tex-Mex restaurant chain as his way of beating back the recession. And get this: he's even growing sales and opening new stores.

Stephen Martin is as meticulous as they come, right down to his neatly cropped mustache, pressed shirts and dapper khaki shorts.

So why is Martin, the onetime head of operations for half of a $200 million restaurant company, allowing and encouraging the staff of his Tex-Mex themed restaurants in Pinellas and Sarasota counties to wear visible tattoos and body earrings to work? Several cashiers have both nose and lip rings.

Call it Martin's recession survival plan: The few, the proud, the pierced.

“As long as they are sincere about service and take care of people,” says Martin, “I don't care.”

What Martin does care about is connecting customer's experiences to growing sales, something he has done with piercing precision the last seven years. The owner of six Tijuana Flats Burrito Co. stores on the Gulf Coast, Martin has used his philosophies mined from 30 years in the hospitality industry to come up with a few must-dos, from realizing the critical importance of location to never taking the competition lightly.

And those truths have proven to be the perfect antidote to the recession. Martin's six stores, under the Sarasota-based entity Hot Restaurants, combined for more than $7 million in revenues in 2008, including a trio of restaurants that surpassed $1.3 million a piece. That was a company-wide sales increase of about 10% over 2007.

Sales are also up this year, just under 10%. Martin says for as tough as the recession has been on fast-casual restaurants like Tijuana Flats, even slight growth is a major accomplishment.

Indeed, business is so good at Martin's six Tijuana Flats locations that he's seizing the recession to open a seventh restaurant, in a former used CD store on Clark Road in Sarasota. Not only is Martin confident he has the right internal plan to succeed, the economic downturn has created a renter's market.

That in turn has allowed Martin to pounce on a low lease rate on the 1,800-square-foot store.

Martin plans to open at least two more stores in 2010 and after that, possibly move into Manatee County, the third leg of the development agreement he holds with the Tijuana Flats corporate office.

Need more fun
The Tijuana Flats story is a made for Hollywood entrepreneurial tale and one of the reasons Martin bought into the concept in the first place. Entrepreneur Brian Wheeler founded the chain in 1995, soon after he graduated from the University of Central Florida.

Even though Wheeler had never worked in a restaurant before, he enjoyed being a customer at many of the college pubs in and around Orlando. And he thought his idea of building a Tex-Mex restaurant around funky named hot sauces and with an even funkier inside vibe, would be a hit.

On those sauce names, think really funky, like one of its more famous bottles: Smack My Ass and Call Me Sally.

Wheeler, armed with a $20,000 loan from his parents, opened his first store in Winter Park. By the next year he was running a side business that sold the sauces to other stores and eateries.

And by 1998, Wheeler had opened two more restaurants. Things were going so well that he soon hired Camp Fitch, a national hospitality executive who had recently retired from overseeing an 800-strong restaurant group that included names such as Bennigan's and Steak & Ale.

Tijuana Flats has since grown to more than 70 restaurants in Florida and four other states, with another 30 in development.

And for Martin, the buy-in part is literal: In 2002, Martin emptied his 401(k) and other savings totaling $300,000 to buy into a partnership with Maitland-based Tijuana Flats for two stores, one in downtown St. Petersburg and one just south of downtown Sarasota.

Martin, who was born and grew up on the east coast of Florida, had been working in the Atlanta office of Metromedia Restaurant Group, a subsidiary of the restaurant conglomerate run by Fitch. Martin oversaw the operations side of more than 50 Steak & Ales, a difficult job as the chain was struggling to gain market share in the late 1990s.

“The last two or three years there all I did was close restaurants,” says Martin. “It wasn't fun.”

Martin also longed to get back to Sarasota, where he went to college and began his hospitality career in the 1970s as a bartender at the Steak & Ale on Tamiami Trail.

Around the time Martin was at his end with Steak & Ale, he received a call from Fitch, his former boss and mentor. Fitch wanted to know if Martin wanted to get in at Tijuana Flats.
Martin visited a few stores in and around Orlando and Gainesville and was hooked, both on the concept and the employees. He signed a deal with Tijuana Flats for the development rights for Manatee, Pinellas and Sarasota counties. Says Martin: “Every employee I talked to said this is the greatest place to work.”

Getting cocky
Martin's first move with his development deal was to tinker with the corporate office's location formula. At the time, most Tijuana Flats were located in Publix-anchored strip malls and other shopping plazas. That was to bring down the rent — often one of a restaurant's top expenses after food and labor costs.

Martin, however, thought he needed to be in the middle of the action to increase his sales potential. So he found a spot for one Tijuana Flats on trendy 4th Street North in downtown St. Petersburg and a second location across the street from Sarasota Memorial Hospital.

The gamble paid off.

Martin's first two stores blew past initial sales expectations and he soon opened four other Tijuana Flats, one each in Largo, Tyrone, Pinellas Park and Oldsmar. Martin even admits that during the boom he got a little cocky because success was coming so quickly. “I was thinking I just can't lose,” says Martin.

The recession brought Martin back to reality. He has spent a good part of his management efforts in the downturn preaching the importance of top-notch customer service. Customers are to always be greeted with a smile, trays are to be delivered and removed from tables and soda cups are constantly refilled.

Martin has even dabbled in the risky venture of offering price cuts and giveaways, long seen as solving a short-term problem with a long-term crisis because it could train customers to wait for a sale. In June and July, though,

He says in the Sarasota store alone, he gave away $7,000 of burritos in June. A small price to pay, says Martin, as long it can turn into repeat customers. “It will get them in the door,” Martin says, “but then we need to blow them away.”

The recession has also unleashed Martin's inner fighter. For instance, when competing Tex-Mex chain Chipotle Mexican Grill announced plans to open a store couple of blocks away from Martin's Sarasota location, he didn't take it lightly.

He spent more than $10,000 renovating his store, focusing on little details such as fresh paint and new interior decorations. He held regular go-get 'em meetings with the employees. He directed shift managers to hyper-focus on plate presentation and the customer experience, down to greeting each customer who comes in the door immediately. With a smile, too. 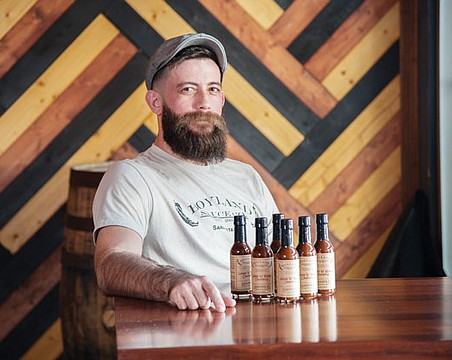 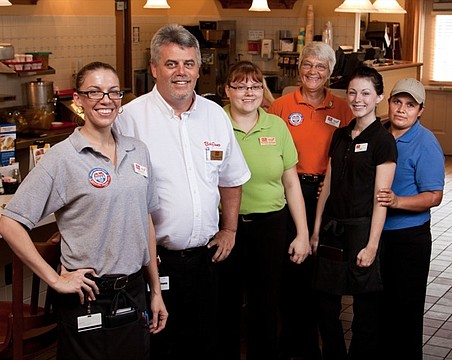 Put the lime in the growth

Chomp to success, one store at a time 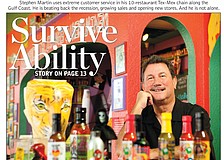 Nothing is flat about local entrepreneur's expansion 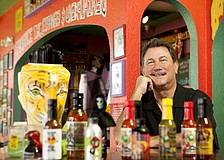