Three judges upheld an earlier judge's decision to remove a charter amendment from the November ballot that would allow voters to decide whether Hillsborough County should move to a county mayor form of government.

Judges ruled in favor of Hillsborough County Elections Supervisor Buddy Johnson. The appeals court said a clause placed in the amendment by Elected County Mayor Political Committee Inc. that called for the election of a county mayor in 2008 - ahead of when voters would decide whether to amend the charter - made it impossible to enforce.

Tampa attorney Mary Ann Stiles, the leader of the county mayor charter initiative, is appealing the decision to the state Supreme Court, but it is likely there won't be enough time to get the measure on the November ballot.

However, a voters referendum to give a county mayor veto power remains on the ballot. Stiles plans to use the results to demonstrate support for a county mayor.

The head of Tampa's Lowry Park Zoo, Lex Salisbury, is being asked to prove that his entrepreneurial work in Polk County hasn't created a conflict with the taxpayer-backed zoo.

Hillsborough County Administrator Pat Bean has asked the zoo to make sure that no county money was used for Salisbury's private animal park, Safari Wild, in Polk County.

Bean sent a letter to the zoo asking for a copy of its independent audit of transactions with Safari Wild.

Salisbury faces criticism for a potential conflict after reports that the zoo had built two barns on Safari Wild's property.

For the second consecutive year, Manatee County commissioners have approved a budget that will decrease countywide spending. The new budget, approved Sept. 15 after four months of public meetings and debates, is for a total of $531 million - down more than $40 million from last year's approved budget.

County officials said they would be dipping into budget reserves to pay for government services, a move also made by Sarasota County officials when they recently pared down that county's annual budget. Manatee County cut spending by about $20 million last year.

One of the largest retail commercial developments in east Manatee County, Lakewood Ranch's Main Street, is getting a new anchor tenant. The space, formerly occupied by Morton's Gourmet Market, will open as an Ada's Natural & Organic Foods supermarket store early next year.

Fort Myers-based Ada's offers a variety of organic and natural foods, a formula that has been successful in its flagship store. In addition to the Lakewood Ranch store, Ada's plans to open four other stores in Florida between the end of the year and 2009, including one in Estero and one in Naples.

Ada's would also become the second organic products store to open in east Manatee County; a Fresh Market is scheduled to open on University Parkway, a few miles from Lakewood Ranch, by the end of the 2008.

Morton's Market closed in February, leaving the 10,000-square-foot space empty. The store is the front anchor for Main Street, which also includes a Chico's and a movie theater.

The Economic Development Corp. of Sarasota County is unveiling its first "buy local" program later this month. The campaign is designed to encourage local business leaders and government officials to buy services and products from other local businesses.

"When local business supports local business, everyone wins," EDC President and CEO Kathy Baylis says in a statement. The program, which includes advertising in print and online publications, is built on a theme of "Sarasota County One: We're in Business Together."

Ave Maria University, the new Catholic institution in east Collier County, plans to build a 552-student "mega-dorm." The facility will also have room for two residence directors and four priests.

The dorm, which is scheduled to open in August 2009, will include a large meeting space, laundry facilities, computer labs, meeting rooms and sitting areas. There will be a chapel on the top floor.

"The new 'mega-dorm' will allow us to continue to recruit and accept new students without constantly having to worry about whether or not we are going to have room for them and it also enables us to keep the men's and women's dorms separate," says Tom Monaghan, the founder of Domino's Pizza who provided funding for the university with the proceeds from the sale of his company. 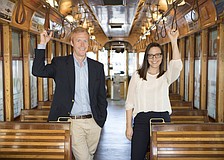