During a panel discussion, Limburg joined panelists from Butterfield Trust (Guernsey) Ltd. and UBS AG Zurich on the topic of anonymity, confidentiality and money laundering. One of the issues they focused on was structured confidentiality agreements.

Just recently, Limburg displayed his ability to execute such confidentiality agreements in a half-billion-dollar-plus real estate deal. The project includes the sale of six high-profile office buildings in Tampa, three in Orlando and several others in Raleigh, N.C., Richmond, Va., Atlanta and Houston.

None of the principals that participated in the transaction would talk about the intricacies of such a high-profile deal. Only a few public records exists that even confirm the actual transfer of property.

It's a deal that Tampa real estate broker John Carter spoke about with much trepidation. His firm, Atlanta's Carter Real Estate, bought the property for what he describes only as a private European trust.

"I'm not at liberty to discuss anything," Carter says, referring all inquires about the deal to the New York office of Eurohypo AG, Germany's 10th largest bank and the transaction financier. Michael Seton, the bank's U.S. managing director, declined to comment.

The relationship between Strategic Real Estate Advisors and Limburg interlocks. Limburg serves on the firm's board of directors, in addition to his work as a partner in the Zurich law firm of Limburg & Supino. He and law partner Pietro P. Supino also operate Private Client Partners, a wealth management firm.

On its Web site, Strategic Real Estate Advisors vaguely refers to its role as asset manager over 22 commercial properties identified only as the "Southern U.S.A. Portfolio." Those are the properties sold in this deal.

In an e-mail, Jeremy P. Gates, Strategic Real Estate Advisors' managing director, referred all questions about the deal to the firm's Web site.

None of the principals at either Charlotte's Crescent Resources LLC or Atlanta's Brookdale Group LLC would comment. It was their joint venture, Crescent Brookdale Associates LLC, that sold the portfolio of 22 Class A office buildings that contain about 3.1 million square feet. More than half of the total square footage is in Tampa.

Word of the deal emerged locally in mortgage documents the German bank recently filed in Tampa. The documents describes the total value of all real estate encumbered at about $530 million, with the value of the Florida real estate listed at about $346 million.

Those amounts only hint at the possible total transaction value, since most banks only occasionally lend more than 75% of the value and often times less. Using 75% of value as a bellwether, however, this deal would have a total sale price of about $706 million. That would put the sale price of the Florida real estate at nearly $461 million.

In Florida, the private European trust purchased Corporate Center I, II and II at International Plaza, adjacent to Tampa International Airport. Those buildings contain 970,807 rentable square feet occupied by some of Tampa's most prestigious companies. Tenants include the corporate headquarters of Outback Steakhouse Inc., Walter Industries and the statewide law firm of Carlton Fields PA.

The deal also included three buildings in Tampa's Hidden River Corporate Park, which contain another 418,140 square feet. This site along Interstate 75 in northwest Hillsborough County is the regional home for companies such as Oxford Health Plans, Verizon Florida and State Farm.

In Orlando, the trust acquired three buildings with 367,080 square feet in the Central Florida Research Park, adjacent to the University of Central Florida.

In total the Florida acquisition includes nearly 1.8 million square feet. Again using 75% of value as a bellwether, the Florida properties would have sold at about $262 a square foot. That ranks among the Tampa Bay area's most expensive office deals.

"Generally, there is a tremendous appetite for quality real estate, and the investors have helped drive up prices," says the president of Eshenbaugh Land Co. "At the same time, developers and owners realize it's an excellent time to cash in on this market, especially in light of the uncertainty of the future."

That uncertainly includes new pressures on national public policy, Eshenbaugh says. The federal government, for one, must find ways to pay not only for the Iraq war effort but also Gulf Coast hurricane reconstruction efforts. That may force a review of the congressional action in 2002 to cut the capital gains tax to 15%. Any action on capital gains is a critical public policy issue for the commercial real estate industry.

"It's a great time to be a seller," Eshenbaugh adds.

The reason may be simple why the private European trust purchased this specific portfolio: The Crescent Brookdale partnership has produced considerable leasing successes since the formation of its joint venture about four years ago.

This is particularly true in Tampa where each of the Corporate Center I, II and II buildings report occupancies of between 98-99%.

It's a profitable operation, too, according to records Crescent Brookdale recently provided to the Hillsborough County Aviation Authority. The quasi-governmental agency owns the land under the Corporate Center buildings.

Those records show that combined, Corporate Center I and II, speculative buildings completed in 2002 and 2001, produced nearly $17.1 million in total revenue for the year ended Dec. 31. They have net operating income of almost $11.1 million and about $4.9 million in cash flow after debt service.

Although just completed in November last year, Corporate Center III hasn't yet reached the point of profitability. It produced a deficit of $162,292 in cash flow after debt service through the first six months this year. During that time, it produced total revenue of about $2.6 million and net operating income of nearly $1.5 million. 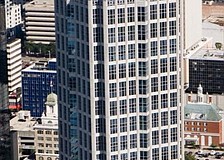 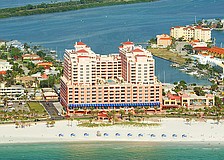 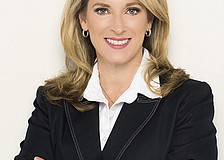