"Our focus is to expand our presence throughout the state," said Christopher Hill, vice-president, principal transactions.

The firm bought three complexes, with a total of 868 units, for $49.14 million. They are located at 5510 Himes Ave. and 9302 E. Martin Luther King Jr. Blvd. in Tampa and 3975 Country Place in Palm Harbor and they were purchased for $15.72 million, $15.24 million and $18.18 million, respectively. Sellers were King Courtney Cove Apartments LLC, King Sabal Park Associates Limited and Kings Sabal Park Realty and Kings Country Place Associates Limited.

Investment Management Trust is one of the leading apartment management companies in the country with operations in California, Arizona, Texas and Florida, said Hill. Renovations are planned for some of the buildings.

"We are building 42 units of brownstone-style townhouses with a price range between the high 300,000s to the low 500,000s," said Jason Woods. Statewide Associates Inc. is building the units.

Patti Kampsen, of Florida Executive Realty, which is handling the deal, said that half of the units were booked in the past week. The units, ranging in size from 1,350 square feet to 2,040 square feet, are expected to be ready by year's end, Kampsen added.

The Woods, who used the corporate name of Bristol Corner LLC for the transaction, and Statewide Associates Inc. mortgaged the property to Gold Bank for $14.24 million.

to be converted into condos

The Villas at Renaissance Square, located at 1220 S. Missouri Ave., Clearwater, will be converted into condominiums, according to Bill Rogers, general counsel for the new owners, Montecito Property Co., a Jacksonville Beach real estate developer.

"We buy, hold and develop properties, converting apartments to condos, and we are the second largest condo converters in the country," Rogers added.

In Florida, the company also owns residential properties in Sarasota, Palm Beach and Jacksonville. And it has holdings in Arizona, California and South Carolina, Rogers said.

Taub had bought the property in October 2004 from Clearwater lawyer William Kimpton and Dunedin-based project planner Richard Gehring for $16.3 million.

Crystal Beach Capital LLC, the name used for the transaction by NJR Development, mortgaged the property at Gulfview and Coronado Boulevard for $8.25 million to Wachovia Bank NA.

With 314,597 square feet leased out and 1,355,943 square feet under construction in the fourth quarter, the Tampa Bay area industrial market held positive for the third consecutive quarter, according to a Grubb & Ellis Commercial Florida study.

"Based on past years' figures, what's available in the construction market this year and what's going on in the national economy, the industrial market will improve in 2005," said Melanie Garlock, marketing and research manager at Grubb & Ellis. "Vacancy will drop and absorption will increase."

If the current pace of growth continues, the industrial vacancy rates in the area could drop to 6% by year's end, according to the report.

Nationally, the vacancy rate is forecast to drop to a single digit.

In the Tampa Bay area's commercial market, Grubb & Ellis says net absorption turned in positive figures for the third consecutive quarter. A total of 659,557 square feet of office space was leased and 799,636 square feet were under construction.

The area's overall vacancy rate of 16% was the lowest since the fourth quarter of 2002.

With Florida continuing to lead the country in new job creation, adding 159,800 jobs during the past year, rental rates continued to increase, according to the report.

The significant positive net absorption is forecast to continue through mid-year. But major layoffs announced by J.P. Morgan Chase & Co. and Capital One could marginally increase the vacancy rate by year's end.

The apartments, built in 2000, consist of 180 units with 560 bedrooms. Klingbeil Capital Management's student property division, American Collegiate Communities, will own and operate the student housing.

"We kept on the existing management team, but ultimately we will have our own team in place," said Bruce Crane, vice-president, acquisitions.

The company has invested in 1,700 other units in east, central and west Florida, most of which are conventional multifamily apartments.

appointed to state board

Gov. Jeb Bush appointed Tarpon-Springs resident and senior vice-president at CLW Real Estate Services Ann W. Duncan to the Florida Department of Education's Board of Governors. The appointment is subject to Senate confirmation. 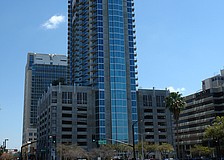