Profile: First National Bank of Florida is the largest Florida-based bank holding company. Now worth about $8.3 billion, the bank is going through a spinoff of its Florida operations; it will then be worth about $3.8 billion, according to Tampa Bay area President/CEO Brian Keenan.

The bank's target market includes small- to mid-sized businesses. About 65% of its customers are commercial; the rest, individuals. Loans range from $25,000 to as high as $30 million, Keenan says.

In 1998, First National Bank Corp. of Pennsylvania bought First National, a move that gave the Florida markets access to $125 million in capital to further grow the bank. In March 2002, F.N.B. paid $150.2 million for Southern Exchange, and on Sept. 15, Keenan was named president/chief executive officer of the 28 branches in Hillsborough and Pinellas counties.

Most influential books: "I just read Jack Welch's book, "Jack," and thought it was a good book. His style of management is similar to mine - it's all about the people and developing them and giving them the right training; trying to put them in the right slots so they can succeed. And Guiliano's book, "Leadership"- real hands-on, with the people type thing. I really believe in that."

Work week: "I usually try to get in by 7 a.m. and home by 6 or so (five days a week). I have a third-grader and a fourth-grader at home, so I try to get home at a decent hour to spend time with them."

Management style: "One thing I really like about our bank, that attracted me to the bank, was (it puts) a lot of emphasis on employee satisfaction and morale. I'm held accountable for employee morale within my market and we measure that every year by doing employee satisfaction surveys where we ask 50 questions like: Does the bank play favorites? Am I treated fairly? Am I given consistent feedback from my supervisor? Each market exec is measured on how well employees are satisfied with the job and the bank. That's good. I'm hands-on. I love to get out and make calls to customers. I hold weekly sales meetings. I have people weekly send in reports on how they're doing versus their goals. We have weekly kickoffs every Monday morning in the branches to talk about what happened last week, what'd we do well, what'd we fall short on; what are the plans for this week. I have an open door policy. I think I'm approachable. I've been told I'm a good mentor by folks who have worked for me. I feel being approachable and being direct with folks and giving them feedback - those are my strengths."

Lessons learned: "It's not always black and white. There are different ways to manage different people, to get to know their hot buttons and know what motivates them and drives them."

Stress management: "I don't think I get too stressed out. I'll be keeping two offices. This will be the main office on Kennedy (Tampa), and one on Cleveland Street in downtown Clearwater. I'll have a support system at both locations. I'm a pretty good delegator and I empower folks to make decisions and do things on their own so I don't have to be involved in every little decision."

Career: Keenan graduated from the University of South Florida in 1986, and worked as a stockbroker in Tampa for about six months. He then joined Barnett Bank in Sarasota in 1987. During his 10 years there, he was a business banker, commercial lender and branch manager. In 1997, he transferred to Orlando as Barnett's small business banking manager for the Central Florida market. Nation's Bank/Bank of America bought Barnett two weeks later. Keenan stayed with Bank of America until 2000 when he joined Huntington as small business banking manager for Florida, based in Orlando. He then worked for SunTrust after that bank bought Huntington. In early 2002, he was hired by First National Bank to head its six Orlando branches. Earlier this month, he was named president of the Tampa Bay area market.

Mentor: "My dad has always been a mentor to me. He was an avid golfer, too. I used to go out and caddy for him on the weekends. His outlook on life, on combining business and personal and family was really a good example for me."

Ambition: "When I was hired at Barnett, I was hired to be a bank president. That was always a personal goal of mine, and I was given that opportunity a year and a half ago. I've had 10 different jobs in different cities, and I've only interviewed one time for those 10 jobs. I just stay focused on taking care of the customers and the employees every day and things just happen. I'm ambitious but it's more by letting the results happen for themselves."

Birthplace: Rochester, N.Y. He grew up in Syracuse and moved to Florida to attend college in Tampa.

Parents: Keenan's father ran a forums business in Syracuse. His mother was trained as a nurse but was a stay-at-home mom.

Just for fun: "I do still play golf. I'm an avid sports fan. Love the Bucs. I follow USF as well. And just spending time with family." 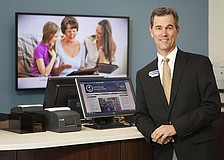