The Observer Media Group Inc. respects your privacy and values the relationship we have with you. We use technology to collect information that helps us enhance your experience and our products and services. The cookies we use help us understand what information and advertising are most useful and valuable. Please take a moment to review our Cookie Policy and Privacy Policy. By clicking "Accept," you agree to our use of cookies and similar technologies.

Downtown Tampa will never be the same when Jeff Vinik's redevelopment project is in full gear. That's the idea.

Late last year, downtown Tampa got a Christmas gift it would never forget.

“When I look at our new downtown strategy and try to think about what it all means, I realize we'll absolutely be able to compete nationally,” says Tampa Bay Partnership Chair Brian Lamb.

Lamb, also president and CEO of Fifth Third Bank's North Florida region, says Vinik's Strategic Property Partners development group has worked closely with the partnership. The idea is to not only develop amenities people have asked for downtown, but also to ensure mechanisms are in place to fill each and every square foot being built around the Lightning's Amalie Arena.

“The partnership's role is to make sure that we are educating folks nationally, around not only this project, but also major strategic projects that drive economic development,” Lamb says.

The partnership also worked with state lawmakers in Tallahassee on the relocation of the Morsani College of Medicine from its northern Tampa home on USF's main campus to downtown. When he announced the redevelopment project, Vinik called anchors like the medical school “key pillars” in the overall plan.

But the driving force behind how quickly the new downtown will start to go up will instead depend on when Vinik finds an anchor tenant for its massive office space. That could be a national corporate headquarters, a mission several Tampa business leaders have made a top priority. Lamb, for one, believes Vinik's plans are a key selling point to convince a major corporation to relocate its headquarters.

“Relocation centers around workforce, and we feel very strongly that we have those regional assets in place,” Lamb says. “We already have the University of South Florida and the University of Tampa nearby, and USF proves itself year after year that it's an innovator by leading the state in patents.

“Those educational outlets help provide a trained workforce that is competitive. We just have to make sure we tout those offerings to the right corporate executives.”

The entire downtown vision could take a decade to fully put together, beginning with the USF campus, and possibly wrapping with a 400-room hotel. Vinik estimates his full development will create 3,700 jobs with an average annual salary of $78,000. The project is also is expected to generate $35 million in taxes for Hillsborough County each year.

Mouse over the image below to explore Vinik's vision for Tampa's Channelside District. 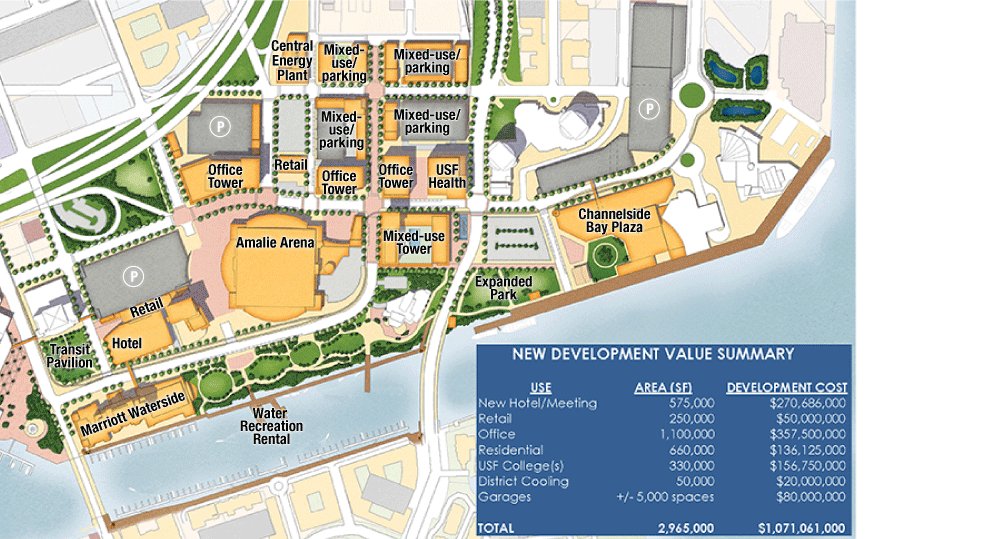 We've noticed you like reading articles on our site.