The Observer Media Group Inc. respects your privacy and values the relationship we have with you. We use technology to collect information that helps us enhance your experience and our products and services. The cookies we use help us understand what information and advertising are most useful and valuable. Please take a moment to review our Cookie Policy and Privacy Policy. By clicking "Accept," you agree to our use of cookies and similar technologies.

Ron Labbe credits the delivery truck he re-engineered for helping Naples Lumber and Supply make it through the last recession.

As the recession wiped out the homebuilding industry, Labbe's re-engineered truck helped Naples Lumber and Supply weather the calamitous years. That's because the trucks are marvels of efficiency that can be operated by a single person, saving the company labor and time.

But getting there required a labyrinth of trials that included getting manufacturers to engineer new parts and legislators to approve new laws. “We had to modify everything to make it all work,” says Labbe. “This is pretty groundbreaking in our industry.”

Labbe, the owner and president of Naples Lumber, started tinkering with his company's delivery trucks more than 10 years ago when one of his trucks broke down. The truck he rented to replace it had a lower chassis, which made it easier to load supplies.

That gave him the idea to start making alterations to his own trucks to better suit his company's needs. “He's an engineer in a businessman's body,” chuckles Dave Weston, the chief operating officer of Naples Lumber.

After more than a decade of engineering, Naples Lumber now has trucks with lower chassis, smaller wheels, taller trailers, and sliding curtains that allow a single employee to unload materials with a forklift that sits on a cradle at the rear of the truck.

Those changes turned out to be critical during the recession, when Naples Lumber was operating on razor-thin margins. “It was a game of inches,” Labbe says.

Labbe says the manufacturer agreed to make changes because it saw the potential for additional customers. What's more, Labbe's trucks cost $250,000, compared with a conventional truck that might cost $130,000.

Naples Lumber installed smaller tires on the truck so the wheel wells wouldn't encroach on the trailer's interior and take away valuable room. Combined with a taller trailer, the company could put a lot more inventory into the trucks including tall windows upright.

Longtime Naples Lumber employee Eloy Goana built movable steel racks that could be easily lifted with a forklift into the truck. Inventory such as doors, windows and lumber sit safely on the racks for transit to the customers. What's more, the racks can be preloaded in the company's warehouse, saving additional labor and time.

The walls of the trailer are sliding thick plastic curtains by Roland Curtains. That allows employees to load and unload the inventory from the side of the truck instead of from the rear, a much more efficient way to deliver materials because they don't have to be loaded in any particular order.

That was important during the recession, when smaller loads had to be delivered. “The market demand shifted to spread-out custom homes and remodeling,” Labbe explains. “You were going 12 places with one truck.”

Forklift challenge
One of the biggest challenges was adding a forklift to the back of the truck, now with lower chassis and smaller wheels.

Naples Lumber hired engineers to design a cradle that stood higher on the back of the truck so that the forklift wouldn't hit the ground if the truck hit a bump in the road. It had to be engineered because Naples Lumber didn't want to compromise safety due to the weight shift.

But a forklift was critical because that allowed a single employee to unload the truck, compared with the past when two-man crews were common. The 5,000-pound forklift has three wheels instead of four, so it can manage in tight corners on a construction site.

For safety, there's a camera and microphone installed on the back of the truck so the solo driver can see obstacles on a video screen and hear anyone standing behind the Naples Lumber truck.

The forklift created another issue: It made the truck longer than allowed by law, and Naples Lumber always had to obtain “over length” permits from the Florida Department of Transportation.

Labbe worried transportation officials might one day nix the special length permits, threatening his business. “The law was a little fuzzy, but we wanted to make it specific,” Labbe says.

So with the help of State Sen. Garrett Richter and State Rep. Kathleen Passidomo, both of Naples, as well as backing from the trucking industry, the law was changed in 2013 to allow for the 45-foot trucks Labbe operates.

Recession trucks
Despite the quarter-million-dollar price tag of Naples Lumber trucks, Labbe says it only takes about two-and-a-half years to recoup the investment on each one with savings in labor and time. “The payback is pretty significant,” he says.

Labbe acknowledges that the trucks weren't the sole reason the company made it through the recession. He had to cut staff and sell equipment like his competitors. “We recognized this was going to be a long haul,” Labbe says.

But Labbe recently added two trucks to his fleet as the economy recovers. “We have five now,” he says.

Mouse over or click on the image below to learn what's so special about Naples Lumber and Supply's custom delivery truck. 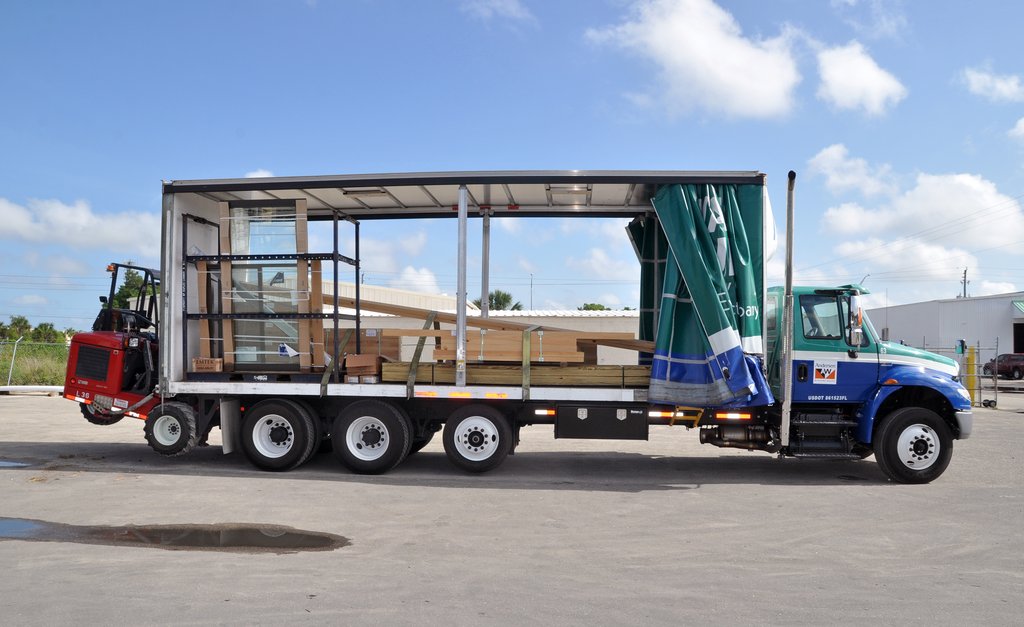 Entrepreneurs of the Year | Lorna Taylor

We've noticed you like reading articles on our site.